The buds bursting on the trees in your backyard might signal winter’s end to you, but chefs take a cue that spring has sprung from the first round of edibles – fiddleheads, nettles, sorrel, wild garlic, onions and other fresh greens and shoots – erupting through the ground this time of year.

“There’s no better introduction to spring,” said Kevin Nashan of the fiddlehead ferns and stinging nettles that he’s already begun using for dishes at Sidney Street Cafe. “They are the first of the forage for any type of spring produce.”

Area chefs, farmers and naturalists are singing sweet praises to this welcome change from the stuffs of the winter root cellar, and they were more than happy to share their expertise on harvesting and cooking some of the delectable edibles that are popping up in the wild and landing on dinner plates around town.

FIDDLEHEAD FERNS
Fiddleheads are the first growth of the fern and are harvested while the young fronds are still tightly coiled. The term fiddlehead is generally used in reference to the ostrich fern, although the bracken fern is also found in Missouri. Fiddleheads from the ostrich fern grow in moist, humid areas – along riverbanks, fertile slopes and in rich-soiled valleys and fields. “People will even have it in their yards,” noted Nancy Snider, a conservation education consultant for the Missouri Department of Conservation. The bracken fern enjoys open, sunny places, woods, old pastures and burned-over areas. Until local fiddleheads hit full force, chefs like Nashan use ones from the coasts. West Coast specimens are green with brown or reddish streaks, while the East Coast variety is an unblemished emerald green with more tightly wound fronds.

Fiddleheads taste a bit like asparagus, but without such a mucilaginous texture. This wild potherb has a definite earthy taste; some describe hints of artichoke, turnip or even a faint fishy flavor. They must be cleaned in multiple changes of cold water, then dried. Most chefs then blanch them in boiling salted water followed by a shock in ice water to retain the vibrant green color.

To showcase this picturesque plant, Carl McConnell of Stone Soup Cottage suggested a simple prep: sauté with butter or oil, garlic and sea salt. Trek to his quaint Cottleville establishment throughout late spring and you might encounter fiddleheads as a side for a meat dish like châteaubriand or even spotlighted on his Wednesday vegetarian tasting menu.
Fiddleheads are a fish-friendly pairing, and for the last few weeks, Nashan has been offering smoked Pacific sturgeon with a springtime fricassee of fiddleheads and stinging nettles. Add to the plate a pool of silky butternut squash purée, a drizzle of crème fraîche topped with tiny individual globes of sturgeon roe and a bit of salty porchetta di testa (salami made from pig’s head), and you’re supping on a dish that boasts the bounty of land and sea.

NETTLES
Nettles are armed with stiff bristles that prick and sting, yet naturalists know that they make for good eating. “The rule of thumb is eat them young,” said Snider. “They are good to eat until the stalk is about 4 to 5 inches. Then they develop the stinging nettle – the formic acid, which is why they sting.”

A stout pair of heavy gardening gloves serves as defense when collecting this green in the field and when handling it in the kitchen. Both the stalk and leaves are edible, but at most restaurants, you are likely only to encounter the tender, milder-tasting leaves of young nettles.

McConnell likes to clip the leaves and use them, blanched, in salads. “I couldn’t serve up a bowl of just nettles. I tend to incorporate them with other greens like arugula.” He added that the nutty, slightly bitter flavor of nettles works for pairing them with moldy cheeses. “And with salty meats, it’s terrific,” said McConnell, who is giddy in anticipation of nettles and some two dozen other greens and herbs that Wiese Nursery is custom-growing for his restaurant this season.

Ryan Maher, who works in the kitchen at Monarch Restaurant and Wine Bar and is referred to by the restaurant’s executive chef Josh Galliano as “a monster forager,” suggested a pesto with nettles as another application. When cooked, nettles lose their stinging property. Steaming, sautéing, or adding to soups and stews are great ways to subdue them.

SORREL
Europeans have long been privy to the slightly sour, lemony sorrel leaves that lend a provocative taste to tossed salads, soups and sauces. Field sorrel, with its narrow, arrow-shaped leaves, is the most common variety. “It often will be growing in people’s gardens. It proliferates everywhere,” said Snider. The leaves of wood sorrel are clover-like, formed of three dainty heart-shaped leaflets that fold along a center crease.

While sorrel grows rampant in the wild, especially in waste soil areas, some area growers are cultivating the plant to supply local restaurant kitchens. There’s Nicola Macpherson of Ozark Forest Mushrooms (who’s also been known to sell her sorrel to the public at the Maplewood Farmers’ Market); Justin Leszcz of YellowTree Farm, who offers lemony Red Bane and French sorrel; and Mike and Carol Brabo, who offer certified naturally grown sorrel from their Vesterbrook Farm in Clarksville. Brabo grows sorrel as part of a micro greens mix and as a stand-alone vegetable-garden plant.

The lemony flavor comes from oxalic acid, which, when eaten in large quantities, can interfere with calcium absorption. As with any plant that contains oxalic acid, sorrel should be eaten in small amounts, particularly by those unaccustomed to it. “Be careful that you are using it as a potherb,” cautioned Snider, who touted the merits of sorrel in a simple soup. “Heat up some organic vegetable or chicken broth, add potato and bring it to a boil. Then add a couple handfuls of sorrel and serve it with some chopped bacon on top.” For a more circumspect introduction to sorrel, chiffonade a few leaves and use as a garnish for a creamy leek or watercress soup.

GARLIC SCAPE
Garlic scape, sometimes also known as green garlic, is the stalk of a garlic plant, one of the first wild greens to emerge in spring. Though scape is not as pungent as the garlic bulb that will form atop the stalk once the plant matures, these green tops still boast the flavor and aroma of garlic, not to mention a picturesque, freeform curly shape while still young.

“Garlic scape is such a treat,” remarked Tim Grandinetti of Overlook Farm, who is so smitten with wild edibles that he’ll be speaking about them at the American Culinary Federation Southeast Regional Conference in Birmingham, Ala., this month. For that event, he’s planned a five-course spring-inspired menu that starts with Ethiopian brown teff topped with Parmigiano-Reggiano and garlic scape fonduta accompanied by sweet and spicy red-pepper jam. For the home cook, Grandinetti suggested using the fonduta atop risotto or creamy polenta. If you want to taste scape without laboring in the kitchen, head to Overlook Farm’s Clarksville Station Restaurant, where Grandinetti is using the fonduta for an appetizer of artichoke fritters with diver scallops and jumbo shrimp.

Grandinetti also suggested cutting garlic scape into 2-inch pieces and tossing it into a stir-fry. For raw uses, it’s a creative addition to zesty, bright green pesto. “And why not raw in a composed salad? It’s easy to digest. They look nice. There’s a great nose. You would think it could overpower, but it doesn’t.” 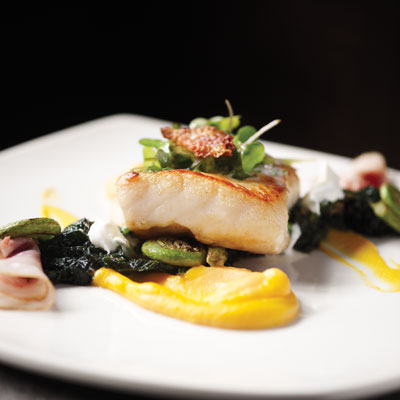 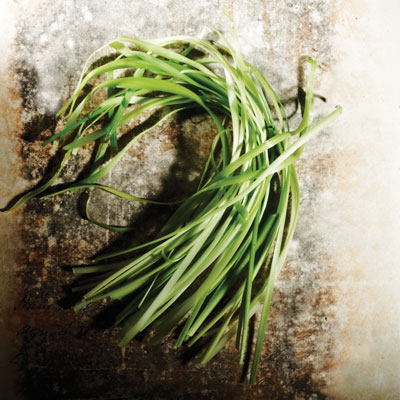