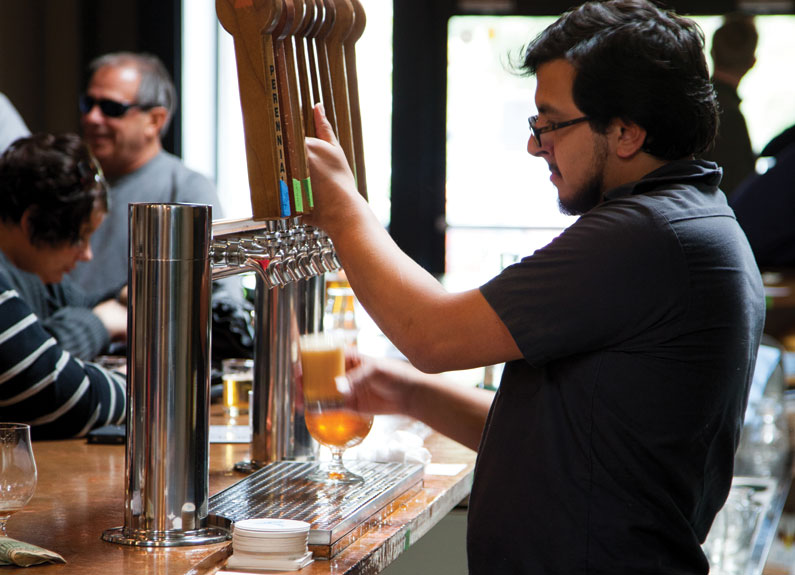 It’s 6:15 as patrons belly up to the copper-topped bar at Perennial Artisan Ales for their free sample of the week’s new brew: a big, hoppy Imperial IPA pumped up to 10.5-percent alcohol. The week before it was a malt liquor called Haters Gonna Hate. Now that’s funny. It’s like this every Thursday starting at 6 p.m., when co-owner Phil Wymore and the Perennial brew crew tap the seasonal, limited-release beer of the week. It’s an example of one of the more exciting, not to mention thirst-quenching, local trends: the renaissance of good beer.

With the surge in microbreweries over the past five years, St. Louis is harkening back to our rich German brewing history. Not since those heady days before Prohibition, when the number of breweries topped 22, has St. Louis been so awash in beer. At last count, beer-lovers now have 19 craft breweries where they can practice Gemütlichkeit, that untranslatable German word connoting conviviality, celebration and camaraderie. In other words, 19 places where beer nerds can gather and geek out on hops, IBUs, and bottom versus top fermentation.

Now, as then, beer is as fundamental to daily life as bread.

Last month, Perennial celebrated its first birthday. Since the start, it quickly gained a reputation for brewing audacious, category-deyfying, farmhouse, Belgian-style ales with esoteric ingredients like fruits, nuts and spices. One popular ale, Peace Offering, even calls for maple-roasted squash. Another calls for pluots. Still another is brewed with cacao nibs, ancho chiles, cinnamon sticks and vanilla beans. You get the picture. Perennial is also gaining a rep for dishing out pub grub that, like its beer, has higher aspirations. After all, if you’re transcending the cult of pale ale, your food should follow suit.

The menu, which changes weekly, is based around bread and cheese. It’s pared down from last November when Perennial partnered with John Perkins and his Entre operation to run the kitchen. Between running a food truck, private catering and his popular mobile underground dinners, Perkins exited seven months later. Since around June, the kitchen has been in the capable hands of Claire Mendez, the sister of co-owner Emily Wymore. You won’t find rillettes of rabbit or bowls of pasta carbonara, as on the previous menu, but you will find enough interesting sandwiches, snacks and cheeses to keep you sated while quaffing.

Memories of childhood grilled cheese aside, Mendez layers slices of Prairie Breeze cheddar and Widmer Cellars brick cheeses with onion-thyme jam between two thick slices of sourdough bread and griddles it until golden. For two bucks extra, you can add tomato, bacon or ham. It’s a molten mess, deliciously creamy and crunchy, a hint of sweetness from the jam, and a good match for a pour of the dry-hopped Hommel Bier. There’s a smoked trout tartine sandwich, served open-faced on a slice of grilled sourdough, that’s elevated by the addition of pickled beets and, when pea shoots were not available one evening, arugula. Using creme fraiche as the binder provided a sharper, more pronounced kick than the usual mayonnaise base. The creamy tartness paired well with the Saison de Lis, a farmhouse-style ale brewed with chamomile flowers. The pork belly, meltingly tender from its slow braise with maple syrup, came on a baguette that had been brushed with a mustard vinaigrette and mounded with pickled red cabbage and apple slaw. Those not accustomed to sandwich-size servings of pork belly will find the cabbage not vinegary enough to cut through this much fatty meat. The rest of us will regale in its unctuousness and drink more Brew for the Crew, a malty Munich-style lager brewed for Kevin Willmann’s restaurant, Farmhaus.

There are other sandwiches, some of which won’t be available by the time you read this. One that is sure to stay – that must stay – is the hand pie, or as I call it, hand-held comfort food. Technically, it’s a pasty – a baked savory pastry filled with meat and vegetables. The fillings change regularly: One time it was Wagyu brisket, caramelized onions, peppers and fontina cheese; another, it was chorizo, sweet potato, corn and Chihuahua cheese. During my visits it was chicken potpie: roasted chicken, sweet and white potatoes, butternut squash and onions blanketed in a creamy béchamel. My first order was burnt around the edges. On the second visit, it arrived perfectly golden brown. Both times the buttery crust was flakey, the filling piping hot. As with all the sandwiches, it came with Billy Goat chips.

The brewery-cum-tasting room is located in the Patch, the funky area on the southern tip of the historic Carondelet neighborhood in south St. Louis city. Beware, finding the place can be tricky. While the address is on Michigan Avenue, the parking lot and entrance is actually around the corner behind the building at Virgina Avenue and Davis Street. There’s a patio section just off the parking lot. Inside, there’s that long, copper-top bar and a nice bar back, but the overall atmosphere is austere: concrete floors, wooden tables and chairs scattered about, a corner for playing darts. After all, this is a brewery (On Saturdays you can take a tour.), so expect all the aromas associated with the process. Service is casual and can lag at times, even when the place isn’t busy. You order at the bar, but the food is brought to your table. Designated drivers can sip on house-made sodas, like Apple and Spice made with Missouri apples.

Perennial’s trademark logo is the ginkgo leaf, a fitting symbol: The ginkgo is a distinct species of tree with no close living relatives. The leaf is known as a “living fossil,” because living leaves look the same as those preserved in their fossil record. The connection seems obvious given Phil Wymore’s academic training in anthropology and archaeology: Practicing the ancient art and science of brewing using unique ingredients unlike any other brewery. But I wouldn’t hold my breath for ginkgo beer.

Vibe
Industrial, Spartan garage-like setting that won’t make a bit of difference with a table of friends.