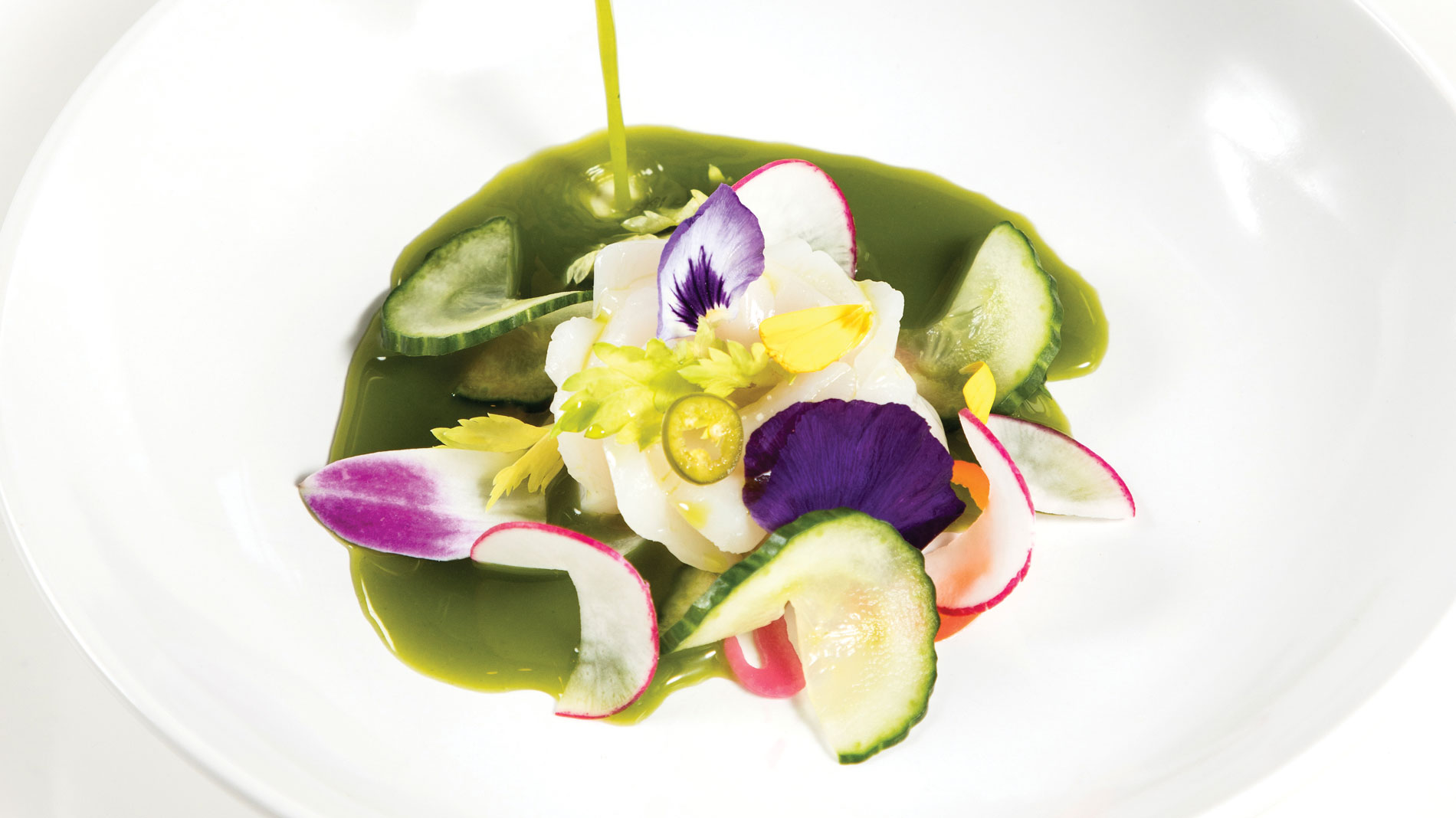 Presumably to avoid being associated with endless baskets of chips and enchilada plates smothered in Jack cheese, restaurateur Ben Poremba has shied away from calling his latest concept, Nixta, a Mexican restaurant. Instead, he describes the food as “contemporary chef-driven cuisine with nods to Mexico and the ‘American Mediterranean.’”

Poremba promised a fun and unexpected replacement for Old Standard, his previous fried chicken concept in Botanical Heights that closed last July. Three months later, he changed the set and followed through. Where Old Standard felt contrived with its countrified motif and menu descriptions, Nixta’s decor doesn’t try to be something it’s not. Wooden banquettes, once unfinished and clear-coated, were painted deep blue, their discomfort softened by colorful throw pillows. With walls awash in mint, salmon and ultramarine, and the sound of snappy salsa music playing inside and out, the small space feels like that beachfront cantina you happened upon once in Puerto Vallarta.

The man completing this vision is executive chef Tello Carreón, formerly chef de cuisine across the street at Bengelina Hospitality Group sister restaurant Elaia. Tapping Carreón only made sense; he’s from Guanajuato in central Mexico, and uses many of his family’s recipes as launching points for modern interpretation.

Take his grandmother’s mole negro: Dense and complex, with emerging layers of gentle heat and subtle nuttiness, Carreón swapped out traditional chicken in favor of tender chunks of veal on my visit. (Other nights beef cheeks are used.) He further enhanced the dish with a sprinkling of chopped fresh herbs and queso fresco before finishing with a ring of chive oil. It was a delicious example of building off tradition without losing one’s place. Placement at the bottom of the menu, offset and outlined in red, emphasized its specialness – as did the $29 price tag.

With a single-page menu, dish explanations and the distinction between small, shareable plates and larger meals require some in-depth discussion with very knowledgeable servers. Depending on your level of patience, it’s a process that could either edify or annoy.

The taco al pastor (singular, as in not to be shared) brought new life to a familiar dish. Here, confit pork belly replaced pork shoulder, providing a fatty richness unlike other preparations – a bit too fatty, in fact. Bits of caramelized pineapple and thinly sliced jalapenos helped, but the best part of the dish was the smallest: two or three dabs of pineapple puree bursting with concentrated sweetness.

One of several street food-influenced dishes, the tlayuda ate like St. Louis-style pizza: A dinner plate-sized crisp, baked flour tortilla spread with a carrot-coriander salsa and topped with dollops of soft, creamy burrata, sesame seeds, sunflower seeds, pepitas, and chopped fresh parsley, cilantro and mint. Carreón’s use of herbs and seeds is an aspect of regional Mexican cooking I don’t see much in St. Louis, but the addition of these simple ingredients brightens many of his creations.

More street food: quesadillas and flautas. The former was filled with thinly sliced zucchini for a uniquely delicious take on a typically dull appetizer. The latter consisted of four slim fried tortilla tubes with a delectably subtle oyster mushroom and cheese filling served on a mound of raw spinach and mushrooms. Unfortunately, mine was missing the advertised crema de hongos.

Tostadas got the fine-dining treatment. Sushi-grade tuna glazed with a white soy and lime mixture provided the focal point for two delectable bite-sized snacks piled with slivers of sugar snap peas, chile mayonnaise, avocado and chopped cilantro, crowned with edible flowers. Serving them on crinkled wax paper brought such an elevated dish back down to street level.

Pollo empanado (fried chicken) served as a nod and a wink to Old Standard’s memory. Nixta’s version had a lighter breading and the benefit of pineapple marinade before being pressure-fried to fall-apart tenderness.

For dessert, order the concha – a pastry cream-filled sweet bread roll in a pool of caramel sauce, which was definitely sharable. The flan, with cheesecake-like texture and delicate sweetness, needs to be savored alone.

The bar said goodbye to bourbon, and hello to tequila. Six house cocktails – numbered uno to seis – and three levels of margaritas ($10, $12 and $14) form the backbone of the drink menu, with a list of mezcal and tequila to rival Old Standard’s massive whiskey selection. My basic margarita – with the bracing simplicity of fresh lime juice and zest mixed with simple syrup and punctuated by dry curacao – was easily the best I’ve had anywhere. But at $10 for a short tumbler (slightly larger than the standard juice glass), there was more sipping than gulping.

After 10 p.m. on Friday and Saturday, Nixta transforms into alter ego Bar Limon, a late-night spot complete with bar snacks and salsa dancing. Just another fun and unexpected example of how Poremba is a master of stagecraft.

AT A GLANCE
Nixta

Vibe
Colorfully eclectic and vibrant, like a beachfront cantina