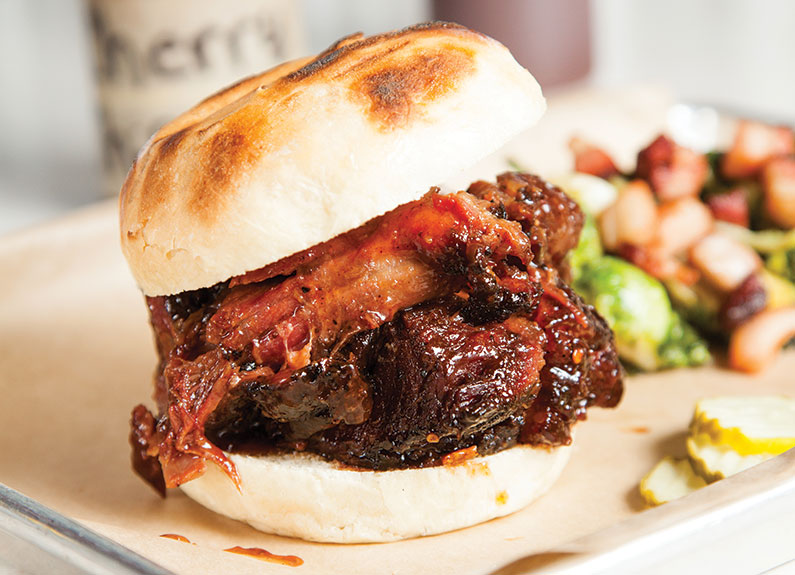 The road to Beast Craft BBQ is long. Missourians must drive over the Mississippi River into Belleville, then hunt among fast food chains for a former Hi-Ho diner. If you smell intoxicating hickory smoke, congratulations: You’ve found the Beast.

And hopefully you left early – it’s not unusual for popular items to sell out by 7 p.m., according to owner-pitmaster David Sandusky. If you want to get your hands on a 1½ inch-thick pork steak or fork-tender burnt ends, you’ve got to plan ahead, people. Step up to the counter and peruse a daily list of offerings, all handwritten on butcher paper. Even if the heavy hitters are out, staples like ribs (with a burnished brown crust, deep pink smoke ring and just enough cling) or smoky half-chickens (moist long after you admit defeat) are sure to satisfy. Meals are served on aluminum trays draped with a few fresh tortillas – perfect for sharing, swiping up house-made sauces or constructing an epic burnt end taco.

Choose from dozens of brews to go with your barbecue. Sandusky stocks his bottled beer list with St. Louis staples like Urban Chestnut and several Southern Illinois-based options like Big Muddy Brewing out of Murphysboro.

Sandusky spent years in the fine dining world before hitting the barbecue pits, amassing skills reflected in his determination to provide not only killer meat, but also a stellar meal. “I wanted to get into something more soulful and family-oriented, more fun to eat,” he said. “I just try to bring the standards that were hammered into me by some of the best chefs in the city … to something more home-grown.” So gas up the car and bring your appetite – the Beast is calling.

Is Beast Craft BBQ your favorite new restaurant of 2015? Click here to vote for this Belleville barbecue joint in the People’s Choice Facebook contest!