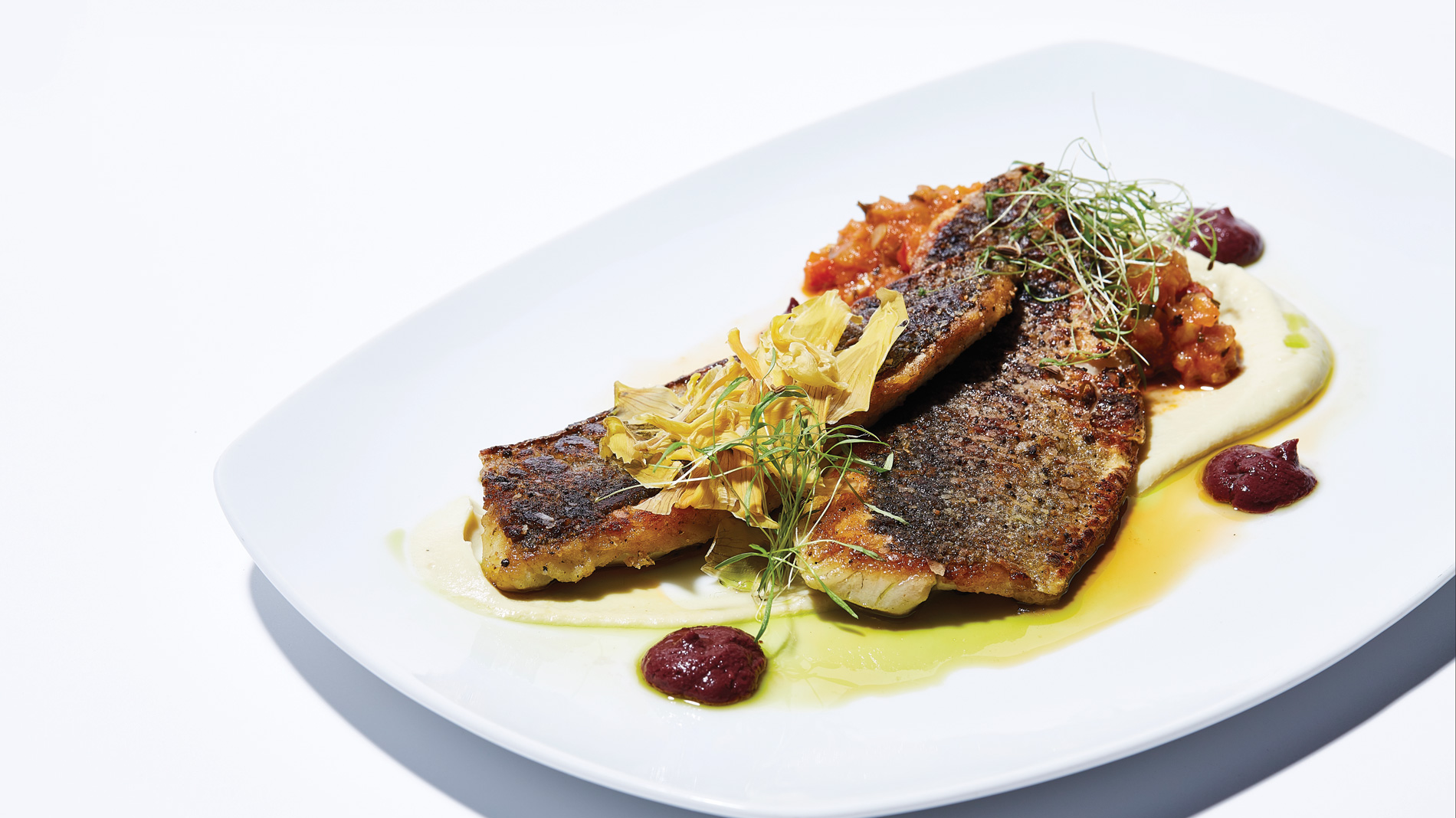 Grand Tavern by David Burke, located on the ground floor of the Angad Arts Hotel in Midtown’s Grand Center Arts District, reminds us that upscale restaurants are, at their core, theatrical experiences. We pay for a staged setting complete with clever scenery, stylish lighting and costumed players who perform their roles over the course of three acts.

The main attraction at Grand Tavern, however, is Burke’s food, which is characteristically imaginative, sometimes overdramatic and often delicious – all at a price rivaling a top-tier ticket at the nearby Fabulous Fox Theatre.

Burke, the award-winning, New York City-based celebrity chef, has been described as blurring the lines between chef, artist, entrepreneur and inventor – a made-to-order match for the quirky Angad, where guests can choose boldly colored rooms based on their moods, like Passion Red or Happiness Yellow.

In the past two decades, Burke has opened more than 20 restaurants, about half of which still operate. In recent years, he has been best known for his hotel collaborations, notably with Trump International in Washington, D.C., and his many television appearances on “Iron Chef America” and “Top Chef Masters.”

In a controversial 2015 move, Burke divorced himself from his namesake restaurant group to join ESquared Hospitality as a consulting partner overseeing new projects, including those like Grand Tavern under the David Burke brand.

Executive chef Robert Cantu, a Texas transplant and veteran of high-end restaurants, is charged with translating Burke’s dramatic concepts into daily dining experiences for hotel guests, theatergoers and curious locals. Many dishes from Burke’s other restaurants have been reimagined to reflect the mood-centric Angad.

From the theater of the absurd comes Clothesline Bacon, another signature appetizer from Burke’s whimsical mind. Three to four thick, juicy slices of peppery, maple-candied bacon are suspended from actual clothespins attached to a little wood and wire “clothesline” frame. We watched dumbfounded as our server ignited a sprig of rosemary. Its heady fragrance enveloped the table as she then torched the bacon, its fat dripping onto a pickle spear underneath.

Is it possible to eat this with a straight face? It’s a comical photo-op – a high-wire act stimulating every sense – but ordering bacon as an appetizer and paying nearly $20 for the experience made me dizzy.

If you want something of substance, try the roasted chicken, brine-soaked for tenderness and served with pistachio agnolotti, cauliflower and a piquant hit of chimichurri. It’s an excellent dish with just enough global flair to keep the palate interested.

Same for the branzino, a vibrant entree in which two firm, meaty fillets sit atop a bed of bright Mediterranean flavors: ratatouille-like simmered vegetables, artichoke hummus and daubs of cured black olive paste drizzled with a glossy green basil oil. Both meals prove it’s not all glitz and whimsy coming out of the kitchen. 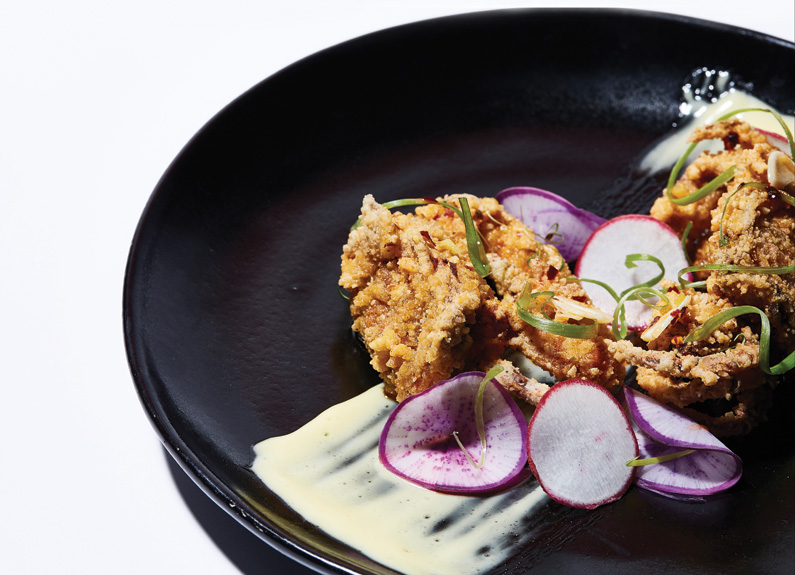 One evening, a spring pea risotto evoked the season, but included honey-roasted heirloom carrots with too much crunch. Another night, fried rice impressed with a 10-ounce lobster tail straddling the dish – split and perfectly grilled to succulent sweetness and doused with the kind of spicy, fishy, fresh XO sauce that should be served by the shot glass.

Grand Tavern’s crowd ranges from well-heeled men in navy sport coats and women in tailored dresses to hipsters in skinny jeans and khaki-clad couples out for a fancy dinner sans kids. Many dine on steak (bone-in sirloin or hedonistic porterhouse) dry-aged with Burke’s patented Himalayan salt-brick process (No. 7,998,517 B2, the menu tells us).

But Saturdays are surf-and-turf night, an opportunity to luxuriate in butter-soft filet mignon and, on my visit, supremely fresh halibut thinly battered tempura-style and pan-fried to a golden crispness.

Grand Tavern’s ornate desserts are shows in themselves. I witnessed many googly-eyed diners as Burke’s cheesecake lollipop tree arrived at their tables in stunning fashion. There’s a nod to St. Louis in the form of gooey butter doughnuts with an over-the-top cotton candy crown.

The dark chocolate-peanut butter mousse, served with a pair of dancer’s legs popping out of the dessert “Radio City Rockette Style,” acknowledges the building’s history as the birthplace of the troupe that later became famous in New York City as the Rockettes.

The restaurant design, like the hotel, is theatrical. On entry, you are greeted by an expansive lounge area where patrons can sip drinks before or after a show. Two dining rooms are also tucked into the space, one outfitted in no less than six shades of red in varying textures.

Grand Tavern’s presence makes sense for this part of town famously devoid of dining options. It takes deep pockets to survive the sporadic crush-and-calm of patrons dining on tight schedules before performances in the district’s many venues. And when there are no shows? In true Burkean showstopping fashion, Grand Tavern can fill the bill … for a price.

Michael Renner is a longtime critic and contributor for Sauce Magazine.