In this month’s Five Questions column (page 54), we spoke with Kevin Lemp, co-owner of the new 4 Hands Brewing Co., about the beers we can expect to see at 4 Hands, what he likes to drink and what tunes he’ll be blasting while brewing. Now, in the second part of this interview, Lemp reveals how he got involved in the beer industry, his take on the local craft beer revolution and why his son became a bit frustrated when construction at the brewery began.

4 Hands looks like it has a really smooth, concrete floor. Have you ever roller skated or skateboarded on it? Actually, yeah. We've got a Sector 9 long board that my son and I own, and before the construction really began, we went here every weekend and skateboarded together around the facility. When construction began, he got a little perturbed because he had less space to skate. There was some soccer going on, too.

Describe your background in the beverage industry. I've been on the sales and marketing side for 10 years as a sales rep and division manager at Glaser's West, managing the Gallo wine and then the craft beer portfolios for six years. Then I worked directly for Gallo Winery in Illinois. Then I went back to Glaser's, managing the Gallo Wine Portfolio and craft beer sales. I'm all about sales and marketing. But the 4 Hands Brewmaster, Will Johnston, started at Union Colony brewpub in Colorado. His story is that he couldn't afford to buy beer, so he decided to become a brewer. (Laughs) It became a passion for him, and he decided to turn it into a career. He went to brewing school in Munich, Germany, and then spent six years at Goose Island Brewing.

Why did you decide to open a microbrewery? Ever since I was a kid I wanted to own my own business, ever since I was eight years old and had a lemonade stand. I got into this business about eight years ago and fell in love with and developed a passion for craft beer. I want to do it well, think outside the box and do something different.

We are truly in the midst of the craft beer revolution in St. Louis. We're in a really interesting part of the country where we see trends after they work their way in from the coasts. Right now we're seeing not only an explosion of craft beer, but [we’re] being encouraged to do everything local – patronize the local butcher, winery, brewery, restaurateur, boutique.

What did your building used to be? We're at 1220 South Eighth St., in a 12,000-square-foot former machine shop. We're keeping a huge crane still in the space that can lift up to 6,000 pounds. We have a 1,500-square-foot tasting room. We're trying to be sustainable, so we bought an old barn from Tipton, Mo., near Jefferson City, and we're using that 107-year-old wood to make our bar. We're using sustainable concrete for our concrete countertops, recycled steel, reclaimed wood for the tables and a former huge dock door that we turned into a community table. We have a 16-by-8-foot window looking into the brewery for a real bird's eye view of the operation.

Will there be food in the tasting room, too? Yes; it's going to be a simple food menu. We want to really focus on the beer, but we are going to provide high quality snacks, like a meat and cheese board, Companion pretzels with individual mustards, and other snacks that go well with beer.

What does the name, 4 Hands, mean? Well, my last name is Lemp, and I just can't have a Lemp Brewing Co., in St. Louis. So "4 Hands" represents my family – myself; my wife; my son, Fischer; and my son, Rowan.

You plan to brew 1,000 barrels of beer in your first year. How much is that, in layman's terms? A little over 1,000 cases a month, brewed and packaged.

Do you ever think about the fact that you're brewing beer right in the shadow of the world's biggest brewer, A-B InBev? You know what? I really don't. We are polar opposites. It's like a really gourmet hamburger joint using all grass-fed, local beef opening up down the street from a hamburger chain – it's totally different. We know we're not gonna mess with them; we're just excited about the future of craft beer. 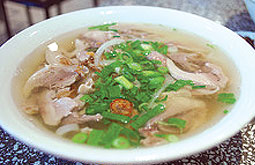 In this month’s Short List, Sauce contributor Dee Ryan divulged which bowls of pho ga you ...