Dressel’s Takes a Turn in a Tasty New Direction

St. Louis has no shortage of pubs – some old, some new, most dominated by sub-par food, mediocre beer lists and jostling 20-somethings more interested in the price of a Bud Light than the menu. But in a town where there’s a tavern dotting every neighborhood and strip mall, Dressel’s stands out. The Central West End stalwart has retained its quaint and quiet charm for more than three decades. And these days, the food’s better than ever.

This is in large part due to executive chef Michael Miller, who has been driving the restaurant in a more inventive and artisanal direction since he took over the kitchen last spring. Miller injected the menu with cerebral doses of high-concept cuisine and local ingredients, but he didn’t forget the simple and nourishing favorites that one expects when sliding into a pub on a chilly winter night. Like the house-made pretzel and rarebit, or the burger – which are both still divine.

But many of these traditional pub staples are outshined by the dishes that Miller has shaken up with refined touches and imaginative new twists. A goat cheese and leek tart, for example, was exquisite. Served with a crispy, sweet salad of endive and greens and dotted with smooth, smoked, cured salmon, it was an alarm clock to the palate. The tart, creamy cheese was the perfect foil to the sweet salad – velvety with a tender and buttery crust. Wake up! A glistening heap of salmon added a lovely hue and salty note to the plate.

When the pork rinds dusted in blue cheese had sadly been sold out, we made a quick decision to order deviled eggs. In Dressel’s off-the-beaten-path rendition of this finger food, the yolk was mixed with smoked ham hock, making for an unusual but good snack that was meaty and slightly smoky. These delicious little orbs were topped with daintily crunchy, bright green beads of wasabi caviar. Weird in the best way.

In a deconstructed version of shepherd’s pie, a thin, silky swatch of turnip purée was the bed for slices of lamb tenderloin that had been cooked to a perfect medium-rare and golden, roasted root vegetables. Nicely seasoned and beautifully cooked, it was sophisticated and pleasing – and a far cry from the typical.
The fish and chips, however, were served just as expected: a deeply fried mountain, golden and crisp. If you’ve ever been to Dressel’s, you know the house-made chips are superb. But the fish, while encased in an enticing bubbly, browned batter, seemed water-logged and off-putting. After examining it and nibbling at the otherwise yummy crust, my dining companion and I simply devoured the chips.

The farm egg sandwich with house-cured back bacon, blue and cheddar cheeses, and tomato jam is a decadent, runny plate. The golden yolk dressed the sandwich (and my blouse) nicely. Though a bit over-the-top for my liking, it was good – very good. A hint of lemon brightened things up.

The nightly stockpot soup – a stew of root veggies, barley and beef – was a watered-down affair, thin and under-seasoned. Far superior was the tomato bisque, a pleasantly viscous bowl of lusciousness that accompanied the truffled grilled cheese. Unfortunately, the earthy flavor of truffles on the grilled cheese was barely discernible. A slightly heavier hand with the truffle oil would have been just right. It’s a shame, since the thick bread was crisp and toasty, giving way to a steamy, molten center.

Another sandwich, the porchetta Philly, was a melting pot of Italian-American rendering: slow-roasted pork, Provel, a little rapini and pepperoncini, all on a toasted baguette. The Provel is the misstep here. The pork was so wonderfully savory, the rapini contrastingly bitter and the peppers, a spicy smack, but the Provel coated everything in a plasticine way.

For dessert, a glass pedestal mug is the vessel for a coffee-flecked mousse, topped with a boozy whipped cream. Quickly devoured, it offered sumptuous textures, subtle sweetness and a jolt of caffeine.

For a restaurant that wants to shine a light on its recent shift into the world of all things local and seasonal, it only seems natural that the staff would be able to prattle off any minute detail without blinking an eye. But while well-meaning and friendly, the servers seem uninformed about the menus, availability and sourcing of ingredients. While there’s no doubt in my mind Dressel’s will be open for decades to come, fine-tuning the service and keeping an eye on the kitchen will be key to making sure its best years are ahead. 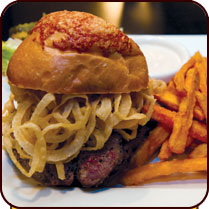 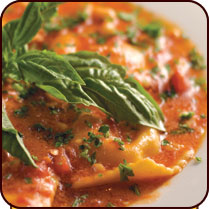 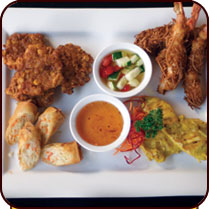