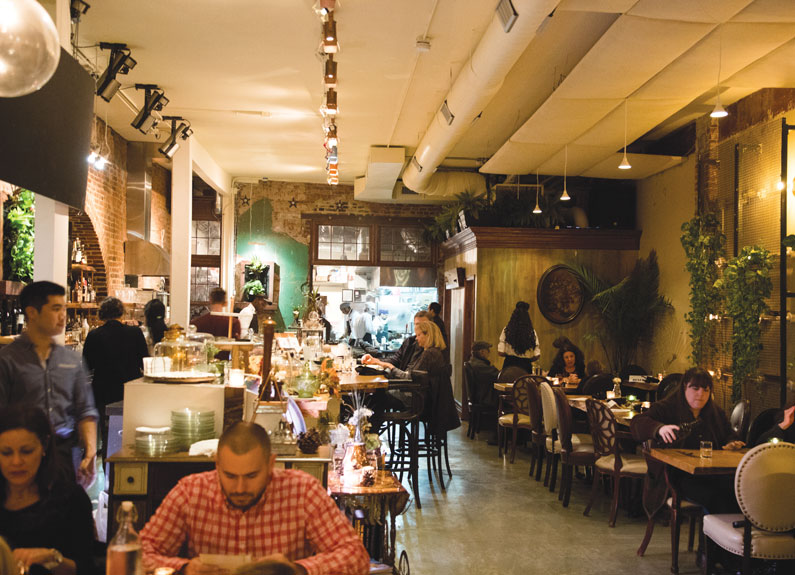 Review: The Garden on Grand

Editor's Note: The Garden on Grand has now closed.

"It reminds me of The Secret Garden,” the woman across the table said, referencing the early 20th-century children’s novel as we picked our way through a plate of pickled vegetables and crunched on crostini. Looking around The Garden on Grand, the room did indeed feel secret and special, like an urban botanical refuge from the hustle and bustle just outside on South Grand Boulevard in St. Louis’ Shaw neighborhood.

From the exposed brick arches to the distressed polished cement floor to the lush greenery (potted golden pothos plants stuffed into wall-mounted wooden boxes, philodendron cascading from a massive metal grid, flowers and air plants all over the place), everything jives, creating a rustically chic space.

No surprise, then, that owner Cevin Lee’s eclectic sensibility also influenced the menus he created with executive chef Kore Wilbert (formerly of Mad Tomato and winner of this year’s Chef Battle Royale at Taste of St. Louis) in which Asian and European flavors share space with American classics like steak and a burger with fries.

Coconut fried rice exemplified a less-is-more approach: fluffy jasmine rice stir-fried with green onion, shaved coconut, garlic, honey and scrambled egg topped with three large wild-caught shrimp and microgreens. Wilbert evaded the potential pitfalls of using honey – too much, too sweet; not enough, what’s the point? – and dialed in on the right balance of subtle sweetness.

“The roasted salmon is the chef’s favorite,” the host said. Mine, as well: Beautifully cooked to medium, the fatty king salmon melded with the sharpness and crunch of the whipped feta and pistachios encrusting the fish. Bolstered by a mound of lemon-herb risotto and topped with a tangle of microgreens, taste and texture were in abundance; a schmear of contrasting pureed asparagus on the plate echoed the restaurant’s verdancy. The Ground Score was a close second: Long strands of pappardelle and local shiitake, hen of the wood and button mushrooms were tossed in orange basil pesto and creamy white wine sauce. A garnish of pea-sized sweet red peppers provided a sweet contrast to the dish’s umami earthiness.

There were misfires, though. Duck Over-due was an enigma. While the medallions of roasted breast were fine, the accompanying side suffered from a profusion of description (“Confit leg and thigh with potato hash, sweet and savory segmented caramelized orange, onion brulee, sauteed kale, a poached egg and a reduction of orange balsamic garnished with local micro greens”) that took longer to read than to eat, conveying more rhetoric than substance. Despite a puzzling presentation and that unnecessary egg on top, everything tasted good, proving that the skill was there, but experience was lacking somewhere in the kitchen. The grass-fed filet mignon topped with demi-glace, chopped tomatoes and sprout salad sat on a pancake-sized portion of aged cheddar whipped potatoes … served cold. A couple of misses like these can mean the difference between a reasonable extravagance and an unhappily expensive night out.

Service wasn’t an issue during one visit, but another time a half-hour passed between appetizers and entrees – interminably long while nursing a glass of wine. At least that didn’t arrive at room temperature; kudos to the bar for understanding that red wine is best served at cellar temperature. The bar also mixes a fine litany of cocktails. Brexit 75 was a gin, rhubarb liqueur and lemon juice concoction topped with sparkling wine. The Hemingway pulled no punches with bourbon, maraschino liqueur, Benedictine and San Pellegrino Pompelmo.

Lee has talked openly about his motivation to open a restaurant focused on healthy eating following his own journey into a mostly raw and vegan diet. The restaurant’s website promotes using as much locally-sourced, non-GMO and organic ingredients as possible, while offering “healthy, inspired food without compromising taste and texture.” It all sounds pretty noble, but the menu is not exactly aligned with Lee’s inspiration. A burger made with grass-fed beef isn’t necessarily healthier, especially when served with bacon, cheese and fries. Vegetarian and vegan options may be available as specials, but the menu offered only one entree and a couple appetizers on my visits.

To be clear: I liked the place quite a bit. Along with sourcing ingredients locally and paying attention to preparation, the real beauty of The Garden on Grand is its eclectically elegant and relaxing atmosphere. And that it exists where it does – north of South Grand’s popular restaurant district – echoing the theme of rejuvenation running through that classic children’s book.

Vibe
An eclectic, plant-filled space that’s both rustic and chic with diners from the well-jacketed to the well-bearded.