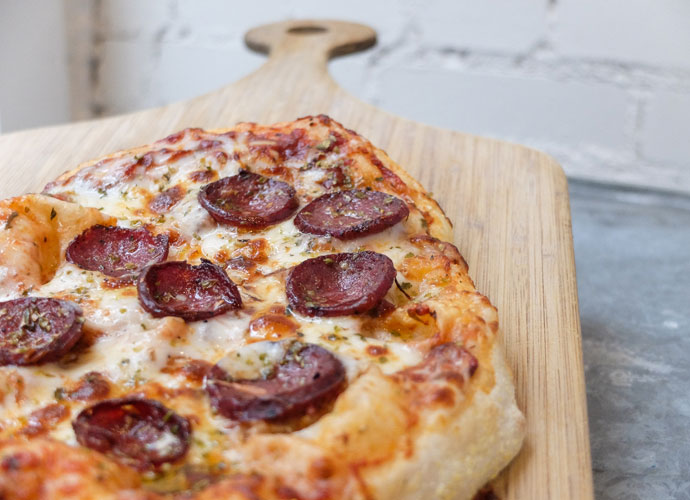 pizza from hugo's pizzeria in midtown

Restaurateur Dave Bailey, owner of Baileys’ Restaurants, will soon add another concept to his stable of eateries. Hugo’s Pizzeria is slated to open this summer at 3135 Olive St., in Midtown, just two blocks away from another of his restaurants, Small Batch. Bailey bought the building, which formerly housed The Good Pie, last year.

“With Small Batch being over there, we were familiar with the building, and when it became available, it seemed like a good opportunity,” said Bailey. “I think Midtown is growing, and it’s a good connecting point between Cortex and downtown. It’s going to fill out, and we want to be there.”

Named after Bailey’s son, the restaurant will have a 12-seat bar, inside seating for 120 and 60 seats in the back garden. The one-story brick building is divided into four individual units, or bays. The bar and dining room take up two of those bays, while the kitchen occupies the third. Bailey said he’ll reveal his plans for the fourth bay in the next couple of weeks.

The main event at Hugo’s will be 12-inch pizzas cooked in a gas-fired deck oven at 550 degrees. Hugo’s will offer a Roman-style crust, house-made ingredients like pepperoni and sausage and other ingredients from the company’s micro-farm.

“It’s going to be familiar cuisine but elevated, family-friendly but open to everybody, much like (Baileys’) Range or Rooster,” said Bailey. “It’s completely approachable. We just love pizza and want to present a version of it that we think is really good."

On the beverage side, Hugo’s will feature 30 draft beers, a selection of wines and a full bar. In addition to pizza, the menu will feature items like burrata, meatballs, wings and salads.

For those who want to get an early taste, starting today, March 15, Bailey’s Shift, Test Kitchen & Takeout will serve three 10-inch pizzas: cheese, pepperoni and a rotating daily special. The pizzas will also be available as a lunch special with a salad and a drink. The smaller size pizza will also be served as a lunch option at Hugo’s.