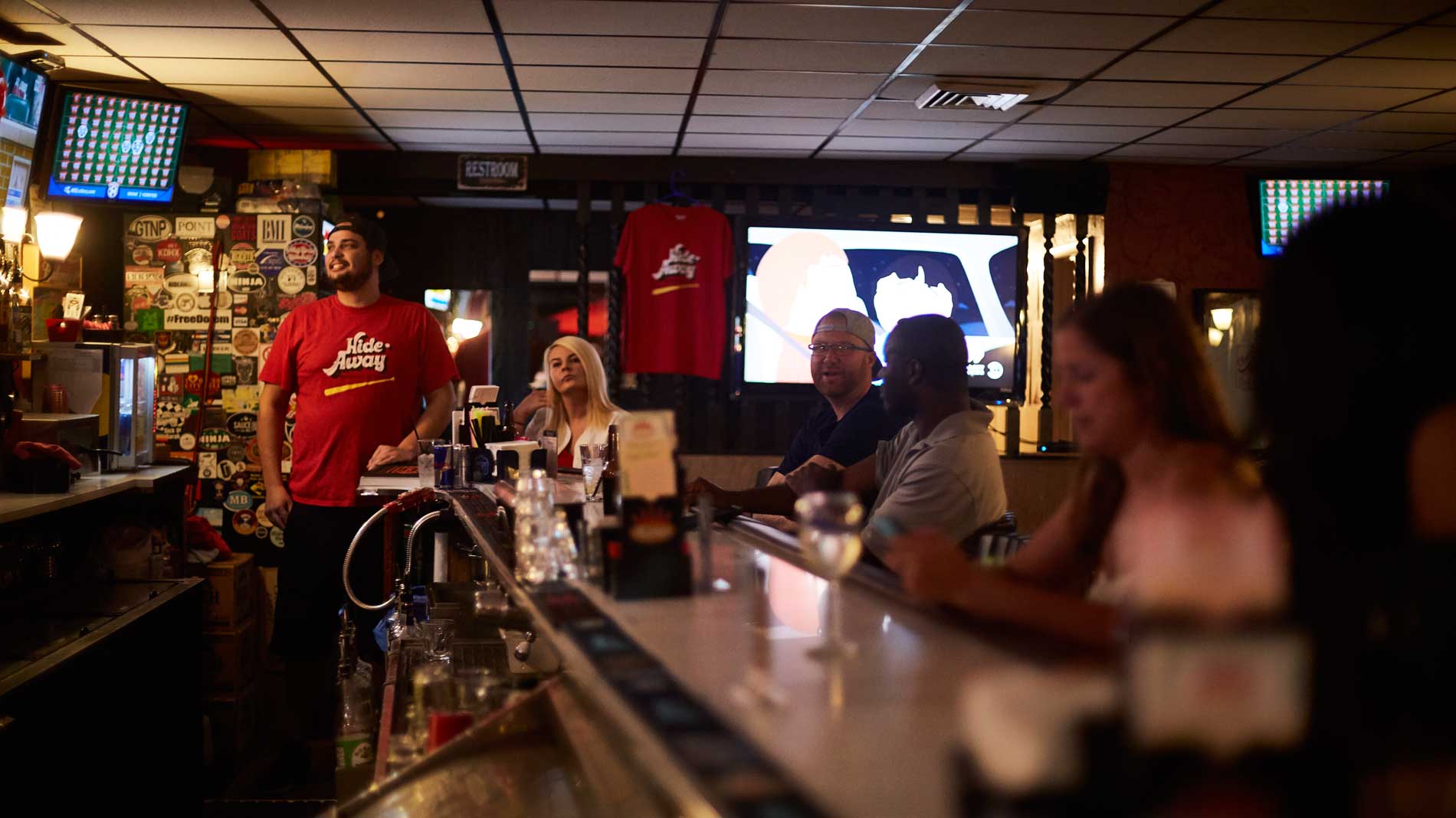 the hideaway has been in business more than six decades. photo by izaiah johnson

Review: The Hideaway in St. Louis

No hipster bar masquerading as a dive, The Hideaway has earned its worn-in feel with more than six decades in business. This is a quintessential no-frills neighborhood watering hole with low lighting, icy cold drinks and a clientele that defies easy classification, except perhaps that regulars are a thing here, and they love to greet each other with a hug or a friendly slap on the back.

The slightest smell of cigarettes betrays the bar’s long history. It changed ownership in 2016, but things reportedly stayed exactly the same except for a fresh coat of paint and the removal of some less-than-spotless carpeting. Smokers were kicked out of the bar, but they still congregate outside the front door.

On weekends, regulars hold court at the long wood bar or around tables outfitted with heavy wooden chairs that can only be described as “grandparent basic.” Dark red, textured plaster walls accentuate the low lighting, while two paintings of buxom women framing the bar add a whisper of old-school naughtiness. For sports fans, there are three TVs – enough for those who care to catch the game, but not a dominating feature.


Although The Hideaway hosts a variety of intriguing events – Meat Bingo, anyone? – Thursday, Friday and Saturday nights reign supreme. When a pianist takes a seat at the circular piano booth in the middle of the bar and starts doing his thing, the room transforms into something a little more festive, a little more intimate. Two musicians, Chris Swan and Oliver Johnson, share the schedule. I caught Johnson one night. In addition to his piano chops, he also kills it on the trumpet and trombone, and his repertoire leans toward crooners like Frankie Valli and Frank Sinatra. Naturally, dancing happens.

The decor isn’t the only thing about The Hideaway that packs a nostalgic punch. No expensive 10-ingredient cocktails (or even a cocktail menu, really) here. The bartenders work from a playbook that predates all the 2010s mixology excesses, preferring drinks that are cold, strong and simple. This means they can work their magic quickly, mixing up drinks and handing out buckets of beer while maintaining a friendly conversation with the characters at the bar.


That’s not to say they don’t know their stuff. When I ordered an Old-Fashioned, the bartender admitted they didn’t have oranges, an essential ingredient in the classic drink. Honesty is valuable in a bartender; I’d rather order something else than be handed a Frankenstein mess of a drink like the ones I remember not-so-fondly from college bars. I happily ordered a Manhattan instead, and it was perfectly done.

Like any dive worthy of the label, the booze here is cheap. Cans of Natural Light and Miller High Life go for $2, and cocktails are around $5. Higher-pedigreed beers are available too. Tucked away behind the bar is a fridge case with a nice assortment of local brews from Urban Chestnut Brewing Co., Schlafly and 4 Hands Brewing Co., as well as a few selections of wine.

For those nights when you just want something simple and good and don’t want to have to think too hard, The Hideaway’s affordability and come-as-you-are-vibe are an appealing antidote to trendier bars.

Stephanie Zeilenga is a regular contributor and critic for Sauce Magazine.