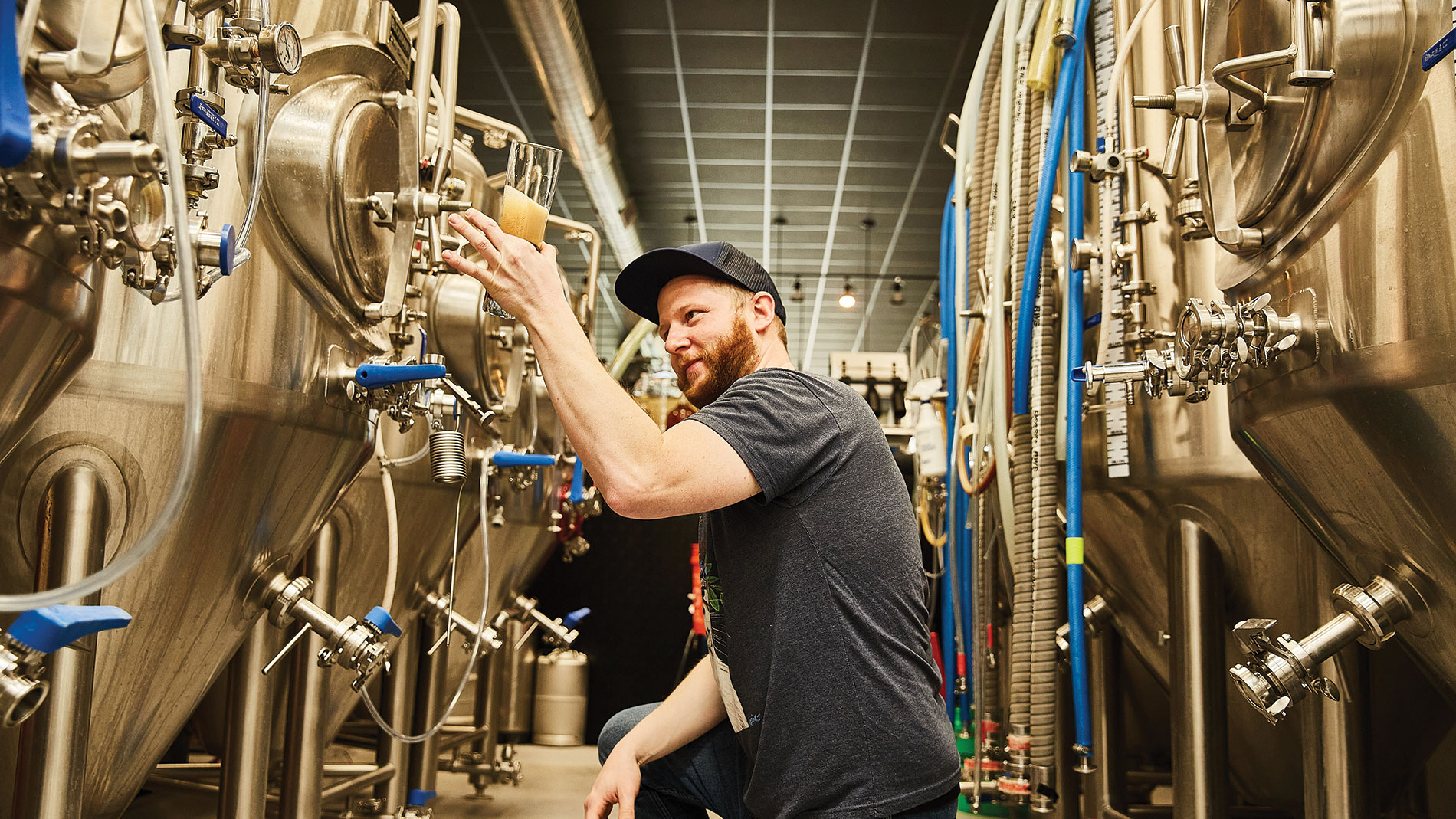 St. Louis has always been a lager town, but craft brewers have fallen in love with the classic style all over again. We turned to some local experts to find out what rekindled the spark.

In a city full of beer fanatics chomping at the bit for the latest New England-style hazy IPAs and spicy-sweet Imperial stouts, it can be easy to overlook the lager, a smooth, endlessly malleable brew built on centuries of tradition. Lagers play a central role in some of St. Louis’ favorite pastimes, like drinking ice-cold Budweisers at Busch Stadium while watching the Cardinals – a team owned by lager-masters Anheuser-Busch from 1953 to 1996. In other parts of town, like South City, menus everywhere from dive bars to fine dining restaurants offer the hallowed Busch; born as Busch Bavarian Beer in 1955, it’s enjoyed by many as a sort of counter-culture alternative to Budweiser, though both are lagers and produced by the same company.

But it isn’t just because of Anheuser-Busch that St. Louis is known as one of the country’s greatest beer cities; it’s our large portfolio of killer craft breweries that’s earned us that distinction. And within that community, lagers have become a sort of benchmark for quality as measured by brewers and customers alike. “It’s a whole different mindset and process from ale fermentations,” said Kyle Kohlmorgen, head brewer at Wellspent Brewing Co. “We had to learn to think differently when brewing this style of beer and become more detail-oriented. When we change one little thing on the front end, we get a different result.”


Part of the difficulty involves scheduling and climate: Lagers take much longer than ales to brew and are fermented at a significantly colder temperature. The word “lager” is German for “storage,” referring to the ice-filled cellars 19th-century German brewers used for brewing when it was too warm out. According to Kohlmorgen, his pale ales and IPAs take six weeks or less to ferment, while his unfiltered Keller Pils spends about 12 weeks fermenting. It also happens to be his most popular beer. “We don’t have a filter, so it’s not brilliantly clear,” Kohlmorgen explained. “It was our bestseller in the tap room before Covid. Whenever we had that on [draft], we’d sell more of that than IPA or our other beers.”

Like most brewers, Kohlmorgen brews his lagers seasonally: Dark, a Czech-style dark lager, came out in winter 2018; in the summer, he does a lighter American-style corn lager; next fall, he’s considering a smoked lager. “It takes a long time to dial in our pale lager process, and now we’re really focused on making sure that beer is really good and branching off from there,” he said.

At Civil Life Brewing Co., another brewery with a sizable portfolio of lagers, the lagering process has become fairly streamlined following a decade spent developing them, said head brewer Dylan Mosley. In his view, lager’s reputation for difficulty largely hinges on the fact that beer production has become optimized for ease and efficiency, making “slower” beers seem more difficult. But these measures are subjective, Mosley pointed out. Adjustments Civil Life’s brewers have made over the years to their lager process include increasing their initial dosing rate of fresh yeast and allowing more time for the “first generation” of fermentation. “By keeping our exponential phase of fermentation really active, we get great results,” he explained.

Civil Life’s list of lagers produced throughout the year is extensive, and the brewery has earned a reputation as one of the best brewers of the style in town. “We brew the Vienna Lager, Dortmunder Lager, Black Lager, Carlbock Lager (a maibock), Czech Pilsner and finish with a few batches of our Oktoberfest Lager,” said owner and co-founder Jake Hafner. “The Oktoberfest Lager is hands down our most sought after lager, and has a legion of fans that await its release each year.” He added that most of Civil Life’s lagers don’t make it out of the brewpub for retail (with Oktoberfest being the exception), meaning that to get the brewery’s full lager experience, one must go there in person.

When asked about their go-to local lager, both Hafner and Kohlmorgen pointed across town to the award-winning Urban Chestnut Brewing Co. – specifically, the brewery’s Stammtisch, a German-style Pils. “To my palate, it’s the best Pilsner in the country,” said Kohlmorgen, who admitted he drinks more of it than any other local beer. Hafner echoed the sentiment. “This is an easy one: Urban Chestnut Stammtisch Pilsner,” he said. “Whenever I see the Stammtisch, I get really happy knowing this is made in our town.”

The Stammtisch isn’t only beloved by local pros; according to Urban Chestnut’s co-founder and brewmaster Florian Kuplent, it’s one of the brewery staff’s favorites as well. “We have a little keggerator [of it] in the brewers’ area,” Kuplent said. While the spicy, herbal brew might get the most love from local brewers, one can find up to a dozen lagers at a time on Urban Chestnut’s taps, including its two best-sellers: Zwickel (a Bavarian lager) and the Urban Underdog American lager. Also, in the fall one can enjoy the O-Katz, a malty Oktoberfest lager, while the summer brings beers like the breezy, golden #6, a Stan Musial-dedicated classic American lager whose recipe predates Prohibition.

Side Project Brewing brewer Drew Durish arrived in St. Louis with a wealth of lager knowledge, having brewed at various Texas establishments, including lauded Austin hotspot The Brewer’s Table. “It’s a city that loves low-ABV, light lagers,” Durish said of his former home. “Generally speaking, you see these as – I hate using the word “crushable” – drinkable summertime beers. For the heat of Texas, they work pretty well.” It’s not surprising that this logic also tracks in St. Louis, a city that relishes complaining about its humidity.

Though Side Project is primarily known for stouts and sours, Durish enjoys the complexity of brewing lagers. “I love the clean slate. It really makes you focus and hone in on the basics of brewing,” he said. “It’s the same thing over and over, and done in a very particular manner. Subtle shifts can make or break a beer.” Durish added that while lagers aren’t necessarily more difficult to make than other beers, their smallest flaws are flagrantly on display, as lagers rarely have the fruit, spices or excessive hops that expand the flavor profiles of beers like IPAs or stouts. “There’s not a lot to hide behind,” he declared.

According to Durish, Content Moderator, Side Project’s extremely popular corn lager produced by sister brewery Shared, had a long journey to get to its current state. “Content Moderator was the culmination of several different things I brewed at The Brewer’s Table,” Durish explained. “This is the 30th iteration, honing in on exactly what I want to be drinking. It’s such a quenching effect, the sweetness.” He compared Content Moderator to a Pils-style lager, the corn taking the place of German or Austrian malt as an adjunct (an added component like barley, rye, oat or grain). “It can always be better, but it’s definitely the beer I’m most proud of in terms of bringing it into its own,” Durish said.

There are a seemingly infinite number of great lagers in town, and everyone has their favorite, from Stammtisch and Zwickel to the Content Moderator. But despite all of the great craft offerings, even the best brewers toast up to the OGs from time to time, with Bud Light and Busch cited by many local beer brewers and foodies (including this writer) as low-key favorites. In his journey from Texas, where Lone Star (another beer created by Anheuser-Busch co-founder Adolphus Busch) is king, to St. Louis, where the King of Beer dominates all, Durish, too, has come to find the magnetic, golden-hued pull of Busch inescapable. “It’s not surprising that that’s a big deal here. I very much got converted to Busch when I moved up here,” he said, laughing. “It’s really good.”