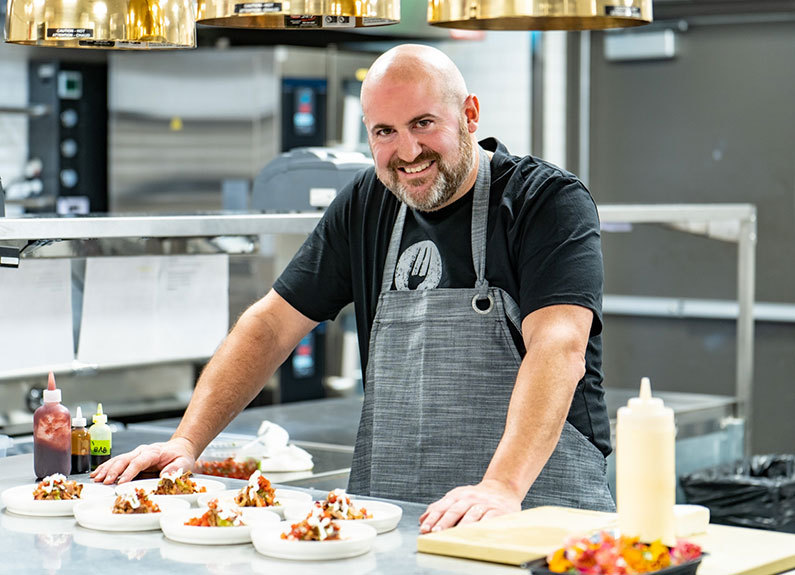 Three months after the departure of chef Ben Grupe, Tempus at 4370 Manchester Ave. in the Grove has announced plans for the restaurant’s future. Owner Peter Brickler has recruited Vito and Amy Racanelli, known for Big V’s Craft BBQ, to head a reinvention that will see Tempus return with a series of pop-up dinners and events, as well as being available as a private events space.

A statement from Tempus said that its new concept would include “unique pop-up dinners, rich with storytelling and culinary history, featuring local food and beverage artisans as well as celebrated local chefs.” Vito Racanelli will be hosting the initial events, but he said the plan is to open up the floor to guest chefs from around the city, particularly the best up-and-coming talents. “We have a lot of young talent in St. Louis, but they don’t necessarily have a place to want to showcase what they’re doing,” he said. “It's not just about me doing my pop-ups, it's about letting other people have an opportunity.”

One theme Racanelli wants to explore through Tempus’ pop-ups are the sources of motivation and inspiration chefs draw on, and the memories that spur creation in the kitchen. “I’m super excited about the whole thing,” said Racanelli. “I think it’s just going to be a lot of fun.” Plans for two ticketed dinners in November have already been announced, with the first being a spaghetti dinner on Wednesday, Nov. 23. Racanelli said that for him, serving this simple meal the night before Thanksgiving will evoke memories of dinners around his family’s table, and he hopes the event will evoke similar feelings for guests. “I just want everyone to understand the direction we’re going – we’re not becoming a spaghetti house.”

On Nov. 30, Racanelli will host the first installment of a series titled Roots, which Tempus previews as “a culinary journey into the mind of a chef.” Racanelli said the event will showcase dishes that inspired him to cook and continue to drive him today. “I was lucky enough as a child to have to go to Italy and visit my grandparents,” Racanelli said. “But there were things that I ate as a child that I can still think of today which were probably triggers in my life to want to cook, and [Roots] is really designed to kind of bring that insight to my guests.” Future installments will feature other local chefs – Racanelli said Jim Fiala of The Crossing and Acero is lined up to host the second event. Tickets for both the spaghetti dinner and the Roots events are available on the Tempus website.

Starting Nov. 18, Racanelli will also be cooking to-go meals served from the restaurant’s walk-up window on South Newstead Avenue. Racanelli said The Window will initially only be open on Fridays (11 a.m. until sold out), but opening hours could be extended once the concept hits its stride. A different menu will be offered each week, with $15 meals including one side and additional sides available for $4. The initial menus, announced on the Tempus website, lean toward hearty sandwiches and barbecue dishes including rib tips, barbecue chicken and pork steak. Upcoming themes include:


The final strand of Tempus’ new business model will be private events. The space is available for private parties and corporate meetings, with a capacity of 60.

“We are extremely excited about this opportunity,” Vito Racanelli said in a statement. “We want to create a space that will embrace the community, highlight our local chefs and artisans and bring people together for a unique culinary experience. With the combination of our private event space, pop-up dinners and food to go at The Window, everyone will be able to enjoy this new and unique dining concept.”

At the beginning of 2020, Tempus was set to be one of the most hotly anticipated restaurant openings of the year. By the time Tempus opened in October of that year, the pandemic had forced the restaurant to operate with a reworked, carryout-only model. In spite of the setback, Tempus placed eighth in Sauce’s Best New Restaurants of 2020.