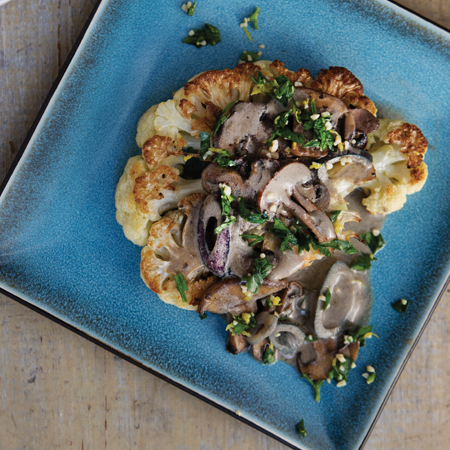 • Preheat the oven to 425 degrees.
• Trim the green leaves away from the bottom of the cauliflower, leaving the woody core untouched. Stand the head upright on a cutting board. Cut vertical slices 1½ inches apart to make the cauliflower steaks.
• Brush both sides of the steaks with 3 tablespoons canola oil and arrange them in a single layer on a rimmed baking sheet. Sprinkle the steaks with ¼ teaspoon salt and the lemon-pepper seasoning. Roast the cauliflower 20 minutes, until the edges start to brown, then flip and roast an additional 10 minutes, until cauliflower centers are fork-tender. Remove from the oven and keep warm.
• Meanwhile, heat the remaining 2 tablespoons oil in a cast-iron skillet over medium-high heat. Add the mushrooms, the remaining salt and a pinch of black pepper. Saute the mushrooms, stirring occasionally, until they brown and release their liquid, about 5 minutes. Remove from heat, pour the mushrooms into a bowl and set aside.
• With the skillet off the burner, add the cognac. Holding the skillet away from you, carefully return it to medium-high heat. The cognac will immediately burst into flames. If not, light it with a long-handled match.
• When the flames subside, add the shallots and mustard, stirring to coat. Add the broth and reduce the heat to medium, stirring to blend, and reduce the liquid by half. Remove the skillet from the heat and stir in the half-and-half and a few pinches of black pepper. Season to taste.
• In a small bowl, combine the lemon zest, parsley and garlic to make a gremolada. Place the cauliflower steaks on plates. Top with the mushrooms. Drizzle with the cognac reduction, sprinkle with the gremolada and serve. 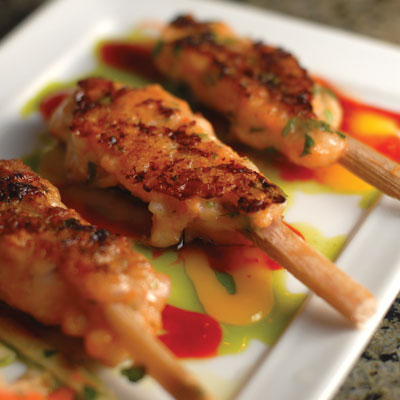 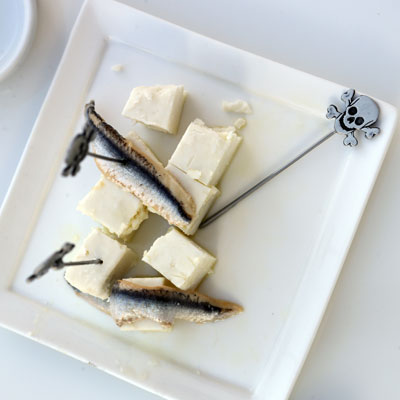 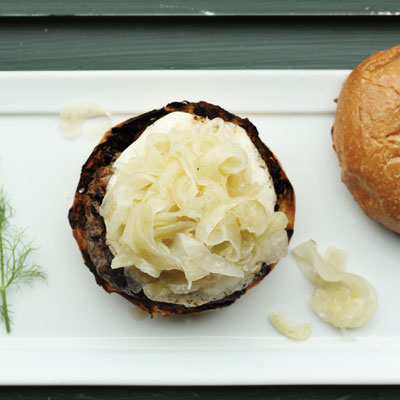