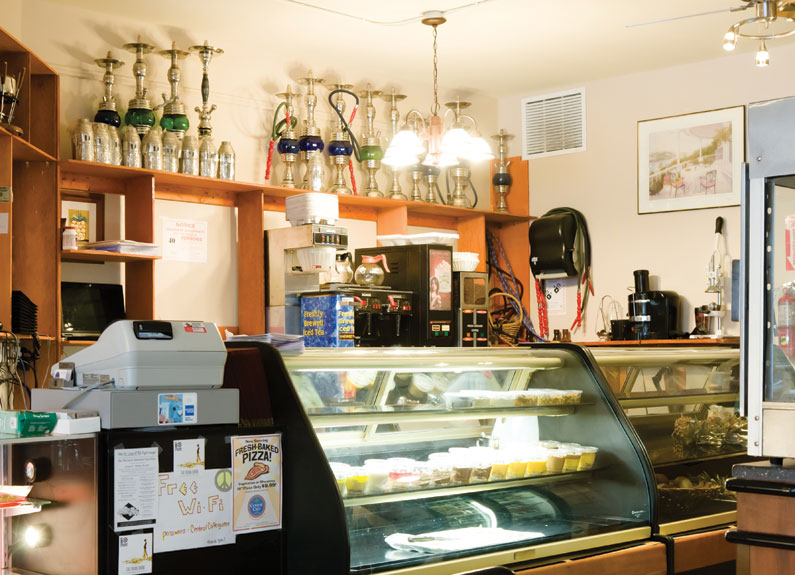 It’s not often you see a hookah lounge paired with a diner atmosphere and a long display case full of Lebanese and French pastries, but such is the case at Central Café and Bakery. Don’t let the eclectic mix dissuade you from settling in at the new Central West End spot: The retro Formica tables, contemporary ceiling fans and colorful collection of pretty glass hookahs add up to a homey, friendly vibe, and the faint smell of pipe smoke sweetly complements the bouquet of bread and fresh coffee, inviting one to slow down for a good conversation with friends.

That conversation will take place over a good meal. Most of the food and beverages are made in-house, including the smoothies and nonalcoholic Sangria. Start with the appetizer combo, which provides a decent assortment of highlights to try: tabbouli, bright with fresh parsley, green onion, tomato and lemon (a salve to a diner tired of winter root vegetables); baba ghanoush, a roasted eggplant dip with a subtle, sweet, smokiness and an elegant finish of olive oil and paprika; and hummus with the traditional, rustic strength of chickpeas, garlic and lemon. The combo’s falafel, described as “golden brown” on the menu, disappointed, arriving rather dark, too crispy and bland, but the stuffed grape leaves with rice, vegetables and piquant lemon juice were so good they were fought over by our kids. But the star here was the warm, fresh pitas, which arrived at the table still steaming; they made all of the dips more inviting.

Dunk that amazing pita bread into the lebneh, or house-made yogurt, which satisfies with the appealing tartness of fresh cream and a light, whipped texture. A drizzle of olive oil and a sprinkling of za’atar, a Middle Eastern spice blend made from oregano, basil, savory, thyme and sumac, added additional layers of flavor.

Central Café’s mastery of bread-baking is also evident in its sfiha, a meat pie popular in locales as diverse as Lebanon, Argentina and Brazil. It is traditionally made with ground mutton, but Central Café tops the masterfully prepared dough with beef. That amazing crust also appears as a base in the appetizer list’s Epinard, which is topped with an appealing sauté of spinach, onion and lemon, and Epinard Fromage, which finishes the spinach mixture with mild, molten cheese. Keep these in mind when you are looking for a satisfying yet inexpensive lunch.

The bread was so inviting that we came back for sandwiches, but were disappointed because, although the pita enveloped lunch to our expectations, the elements of the meal were disjointed. The Makanik sandwich sported ground beef seasoned with allspice, crisp pickled turnips, sautéed onions and tomatoes, but lacked a binder to pull all the elements together. The kabob sandwich showcased grilled beef that tasted surprisingly gamey, and even the inviting smell of char from the grill could not overcome the meat’s odd flavor.

Among the entrées, chicken shawarma both taunted and teased. The chicken’s seasoning struggled to salvage the dry breast meat that was served atop an otherwise enjoyable spicy chopped salad, known as fattoush. Fattoush is traditionally made with fried or toasted day-old pitas and tossed with purslane, radish, cucumber and tomato; Central Café’s dish, sans the purslane, was made with Romaine and came with a garlic cream sauce that helped balance the saltiness of the meat, but the fried pitas were too oily. As a side dish, the waitress suggested spicy potatoes, a comfort food reminiscent of country-style hash browns tossed lightly with dried herbs.

For dessert, make sure to try some of the different billowy phyllo delights, dripping with golden honey, cashews and walnuts. Although made with similar ingredients, the unique structure and recipe of each results in different flavor: The finger-shaped cookie accented a rich buttery cream, while the diamond baklava enticed with flawless puff pastry.

Whether you want a bright place to read while you smoke a hookah, a savory lunch or a sweet nibble, Central Café is a good bet. With its warm service and neighborhood feel, it should fit right into the West End’s historic eclecticism.