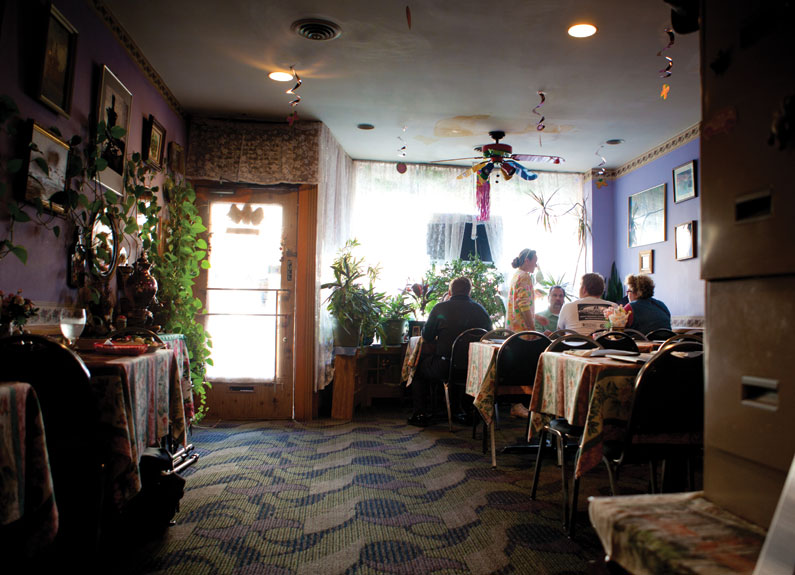 Quietly nestled in the Old Orchard area of Webster Groves, Dvin intimately serves rustic Russian and Eastern European food in a quaint, family-friendly café. With lace curtains on the windows, philodendrons trellised to the wall, and pictures of the Winter Palace and the Siberian countryside adorning the walls, diners might easily imagine they’d been invited to the owners’ home for dinner somewhere along the Volga River.

Neighbors stroll in, and those smart enough to call in advance dine in a cozy room, seating 30 at most. Technically, Dvin has regular operating hours, but reservations are strongly encouraged as the chef and waitress tailor their hours to patrons’ needs, sometimes leaving early or staying late as required.

Dvin has no liquor license but allows people to bring their own wine. We suggest bringing an inexpensive cava and starting with the smoked salmon and blinis. These delicate crêpe-like pancakes were served with a generous portion of elegantly cold-smoked salmon, cucumbers and tsatsiki sauce.

Several of the dips, served with pita and toast, also made nice starters. The Armenian hummus, made with kidney beans, had a delightful rose hue and subtle underlying sweetness. It was certainly more interesting than the traditional chickpea version. The eggplant dip, similar to a Mediterranean caponata, featured roasted eggplants, shredded carrot and yellow mustard seeds. The eggplant had a wonderful sweetness to it that balanced well with the dip’s spicy, savory flavors.

Soups at Dvin were inspired as well. The borscht, served hot, was a lovely vegetable stock that had been built up with tomatoes, cabbage, potatoes and beets; it beautifully showcased the garden’s bounty and warmed the soul. And we were caught off guard by the humble and yet dazzling chicken and rice soup, served with carrots and dill, that made us want to order another bowl, regardless of the summer heat.

A pork dumplings special was a hit. A unique version of a potsticker, it had a simple green onion and pork filling in a handmade dough and was served with house-made Russian dressing so tasty that Dan left wondering why he ever dipped dumplings in soy sauce. A stuffed pepper, another special, was also tasty: a large red bell pepper filled with ground chicken, seasoned mildly with caraway seeds, and served in a light broth combining the roasting juices and a touch of cream.

In a rare misstep, the pork loin had the texture of meat that had been brined and then roasted too long. Although the horseradish cream sauce, tomato and cabbage relish, and pan-roasted vegetables served with it heroically salvaged the dish, there are far too many other delicious entrées on the menu to waste the calories here. Take the lamb korovats, for example. Similar to kabobs, they were grilled to a perfect medium rare with just the right amount of char; they paired well with the accompanying yellow rice and a tomato salad.

Don’t miss the Meat Blintz. These lovely little “blini burritos” are filled with seasoned ground chicken and topped with tsatsiki sauce. A simple dish with a simple presentation; this was, simply, good.

For as soundly as the kitchen has mastered the art of the blini, it can’t compare to its skill with desserts. The layered cakes were works of art. The plum and the honey were the two highlights, but you wouldn’t go wrong with any of the selections. The plum cake had a magnificent flavor complexity – the sweetness of the plum, the robust flavor of molasses – and yet the cake was not overly sweet. The waves of flavors that enveloped your mouth left us wanting a nice scotch, but there’s no alcohol here, remember? Whole cakes are for sale (with advance notice); we’ll just take one home next time. And there will definitely be a next time.

Where: Dvin, 8143 Big Bend Blvd., Webster Groves, 314.968.4000
When: Officially, the hours are Mon. to Sat. – 11 a.m. to 11 p.m, but call in advance as actual hours are irregular.
Dine-in-ability: A quaint dining room and friendly staff make dining in preferred, but carryout is also available.
Feast or famine: Fans of the Russian, Greek, Armenian and Eastern European cuisines will be happy with Dvin’s menu.
Try it you’ll like it: Meat Blintz, borscht, lamb korovat and anything with a blini.