Rite of the River: When fly-fishing calls

It was late spring. The days were lengthening, the flowers were blooming, and, most important, the bluegill were spawning. A man in his early 40s and his 6-year-old daughter stood side by side on the edge of a lake. Helping her wield a fly rod more than twice her height, he taught her to flick her popper fly over the spawning beds. Between the bluegill hovering over their eggs and the largemouth bass hungrily loitering nearby, the man and his little girl quickly caught a bucketful of fish. But her elation over such a great catch turned to worry on the car ride home. Unable to fathom eating them and having already been told they wouldn’t work as pets, she begged her father to let the fish go. The man finally gave into her plea and stopped at a local hospital with a pond brimming with beautiful goldfish. “No one is allowed to fish here, so they’ll be safe,” he said, dumping the bucket into the shallow water. She then watched, horrified, as the bass promptly chased and swallowed goldfish after goldfish.

This was my dad’s idea of “hooking me early.”

Growing up, I loved to rummage through my dad’s basement office, running my fingers along iridescent beads, furry pelts and sparkly threads. To a non-fisherman, his small, cluttered space, also decorated with his favorite found treasures – rocks, turtle shells, turkey feathers, arrowheads, tumbleweeds – looked more like Ernest Hemingway’s writing den (if he also crafted Mardi Gras masks on the side), than a studio for a serious fly fisherman (i.e. one who doesn’t buy flies that “cost more than a sandwich”). Although I moved out of my parents’ house over a decade ago, a part of me stays with these flies; it wasn’t lost on my dad that the Blonde Leech, one of his favorite flies for trout fishing, requires the same shade of hair as mine, my sister’s and our golden retriever’s.

Into early adulthood, fly-fishing continued to play a minor, yet ever-present role in my upbringing. The first time an ex-boyfriend met my dad, within an hour, they were in the backyard practicing casting. My dad patiently instructed – “Careful not to let your rod go past 1 o’clock.” – yet silently judged the boy’s coachability and whether he naturally favored his elbow over his wrist when forward and back casting. Months later when we ended our relationship, my dad reminded me of the day when he noticed the boy’s inability to feel the line lay out behind his cast. He told me that right then he knew the boy would never be worthy of me, but he had waited to tell me because some things I just had to figure out for myself.

Even when I played no part in my dad’s fishing, I still reaped the benefits. At least one time a week, if not several, my mom was frying, baking, poaching or searing the bluegill, catfish, bass or trout that my dad had caught that day. Or she was pulling a vacuum-sealed salmon or halibut fillet out of the freezer from a trip earlier in the year. For my family, to order fish at a restaurant was like ordering a peanut butter and jelly sandwich. It just didn’t make sense.

These days, I’ve adopted the annoying and nonsensical adult habit of always thinking I’m too busy to do anything, particularly when the activity has no guaranteed yield for my time spent. So fishing trips with my dad have been pretty rare this last handful of years.

Yet, this summer I felt a compulsion to make the time. For several months, I’d been noticing Missouri trout dishes on what seemed like every menu in town. Each time I ordered this local fish, I felt a peculiar mix of nostalgia and guilt. In my early years, I only fished for the rush of the catch, taking for granted what I now realized I missed – the process, the plodding and the primal satisfaction of eating something I had caught.

No, I didn’t become a serious fisherman overnight just so I could order trout amandine at The Tavern with a clear conscience. In fact, my dad and I have only been able to squeeze in a few trips in the past few months, and we, mostly, didn’t catch much.

Sure, there’s been one or two A River Runs Through It moments where I would be standing in a cold, clear creek, listening to the swish of my line as it effortlessly danced across the cloudless, blue sky. After a cast, my fly disappeared, and I would yell to my dad, “I think I’ve got one!” I didn’t reel too fast, which would break the line, but instead allowed the 12-inch trout to run and dart and hurl its body through the air into brilliant, shimmering arcs. When I finally reeled it close, my dad landed it in his net, and we ran our hands over its wet, shiny skin, marveling over its beauty and noble fight. Then, without wincing, I cleaned it on the bank, using the technique my dad taught me. With just two cuts, one pull and one push, I removed its guts, gills, fins and bloodline so that in less than 30 seconds, it was ready for a grill.

More often though, I was squinting at a ball of line, once again, so inexplicably tangled that I had to break it off and retie my fly. Or I was slowly wading over to my dad, so he could pick out a new fly because I’d been watching the trout ignore mine for what felt like days. He’d pull one of the gazillion little boxes out of his fishing vest and trade my Wooly Bugger for another bizarrely named fly that was sure to get a bite, even though the last one came with the same vote of confidence. In my oversized footy pajama-looking waders, I’d stumble-step back to my spot while my dad warned me about not letting the trout “sense my presence.” Then, I’d watch the trout watch me as we’d start our song and dance all over again.

But even after just a few outings – even when I don’t catch anything or the river is catch-and-release – I have rekindled my romance with the sport and the fruits of its labor. I can more clearly conjure the frustration of peering through clear water at a trout that refuses to bite and the consequent exaltation when one finally does. I can picture the tight loop my line makes on the rare perfect cast. I can imagine the strange sensation of cold water rushing around waders that keep my legs and feet bone dry. And I can marvel at the velvet touch of a trout belly when I’m holding it underwater, letting the water glide over its gills before releasing it back into the stream.

Even though I’ll never be the fisherman my dad is, catching fish for my family until their brains explode from too much vitamin D, the river calls me too. And by returning to the water, I remember my reverence for all it has given me.

Want to catch trout? Check out Missouri Department of Conservation’s website to plan your next outing: mdc.mo.gov/fishing/places-fish/trout-areas.. But before you go, learn to tie your own flies and master the basic fly-fishing cast at T. Hargrove Fly Fishing Inc., located at 9024 Manchester Road: thargrove.com/flytycst.html. 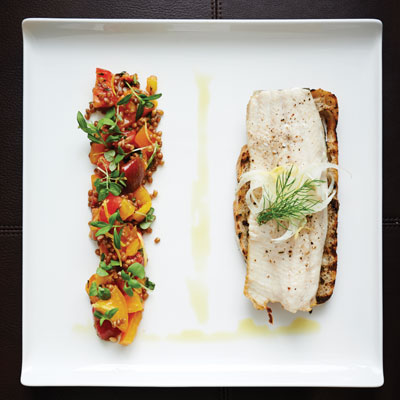 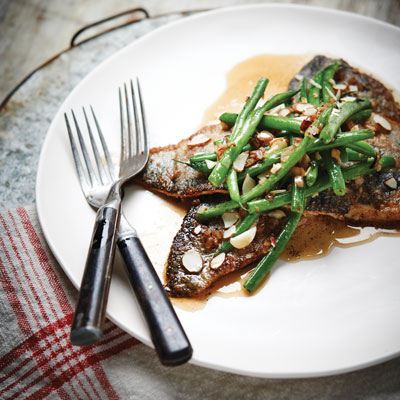