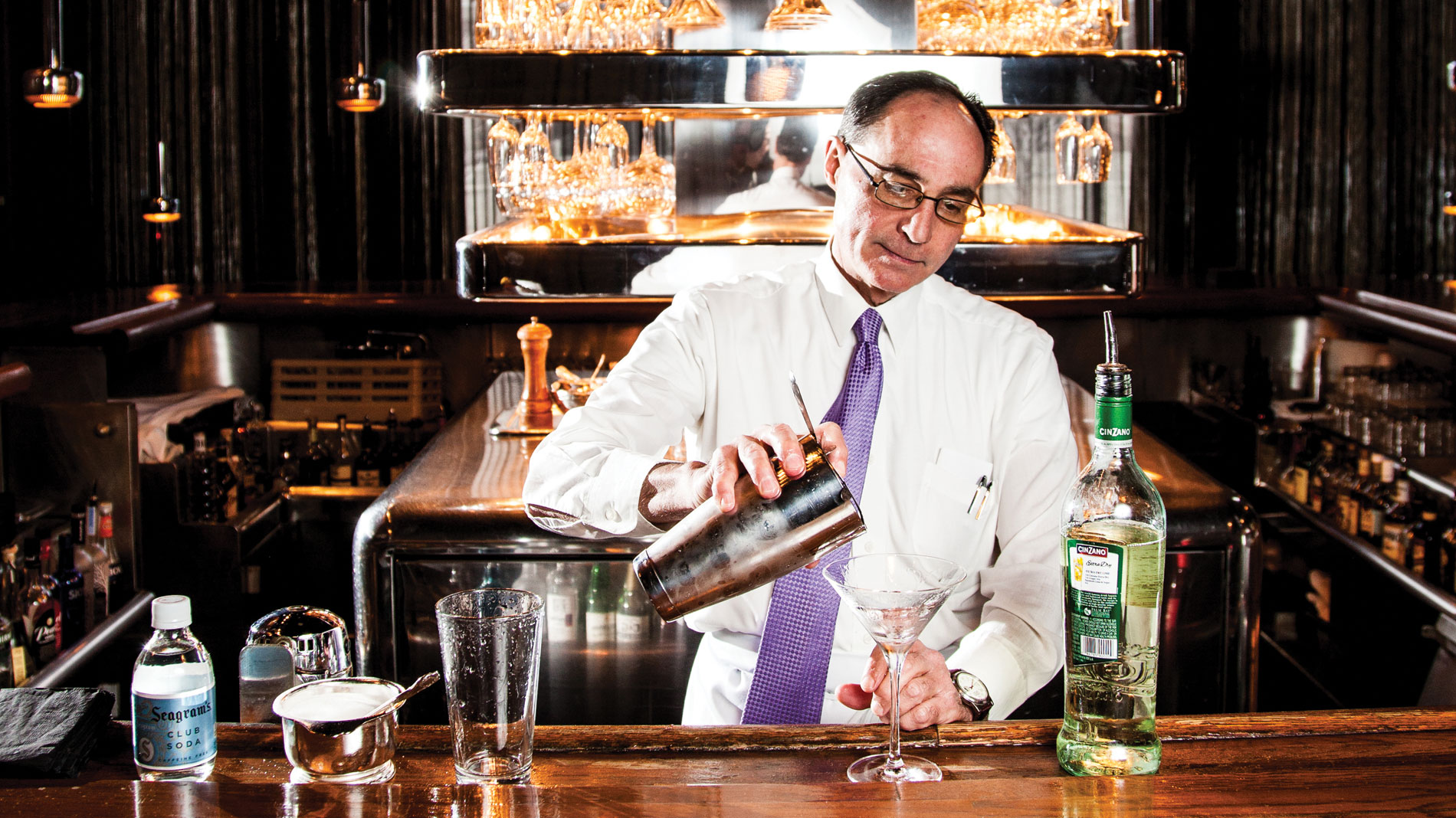 I’m still kicking myself for not reserving a few tables at Anthony’s Bar for dinner during my bachelor party last spring. Stiff martinis and thick, juicy steaks at one of downtown’s classiest watering holes would certainly have been more memorable than the craft beer and pizza we had. Plus, just imagine the valet’s expression at Anthony’s (which shares parking and real estate with Tony’s, its venerable sibling) when our dubious, 15-seat rental van crammed with boozed-up guys fresh off a brewery crawl pulled up to the entrance on Market Street.

Months later, I much more fittingly ended up at a corner table at Anthony’s with my wife, who loved the old-school vibe. The bar, which has long served a more mature, upscale clientele, is a step back in time. Rich wood paneling sprawls above the noir-ish square bar, the kind Don Draper and Roger Sterling might kick back at for one, or six, martinis after landing a big account. While big and bold at first glance, Anthony’s is actually a quiet, intimate space with room for only eight small tables. On weekend nights, these are occupied mainly by smartly dressed, 30-and-up couples. No jacket required, and on a Cardinals game day, the bar even turns a shade rowdy.

To order anything but a cocktail here is a sin – even though beer is available, as is wine (glass selections running $8 to $12 each). Don’t hold your breath for an ultramodern beverage menu or signature drink. Bartenders here excel at the classics: gin martinis, whiskey sours, Tom Collinses, Manhattans, even bloody marys. If you order only one thing, make it the Old-Fashioned. Generously aswim in Rittenhouse Rye, it’s an ideal salve to your troubles. Even tableside, the bartenders pretty much serve as the waitstaff, and they’re nothing but professional. The service is just like the pours – generous and no-nonsense.

Anthony’s is decidedly more casual and affordable than Tony’s. Besides the cocktail program, patrons benefit from a shared kitchen. With only four or five entrees and two specials, the bar menu is pared down considerably, and looking at the selections – salmon, steak, pork chop, risotto – it’s obvious no one here is reinventing any wheels. Like the cocktails, creativity in the kitchen may be a little static, but the quality of the food, ferried by runners from next door, is nothing short of phenomenal. My perfect meal here is the fried calamari, a shared flatbread (the selection rotates), sirloin steak with melted porcini butter and a robust bacon and sour cream twice-baked potato (plus one or two of those Old-Fashioneds). Everything on the Tony’s menu is technically available at Anthony’s, but unless you’re after a dessert, there’s no reason to look beyond the truncated bar menu.

Located across the street from the bright neon, bull riding and beer swilling at Ballpark Village, Anthony’s Bar couldn’t be a more opposite number. With its masculine cool and authentic mid-century swagger, it’s a throwback to quiet cocktail joints where good drinks didn’t have to be “crafted” or “infused” or served in Mason jars. With a sexy atmosphere and well-executed food and drink to match, Anthony’s is one of the best date spots our city has to offer – which means it was probably for the best that the bachelor party dinner there didn’t pan out.