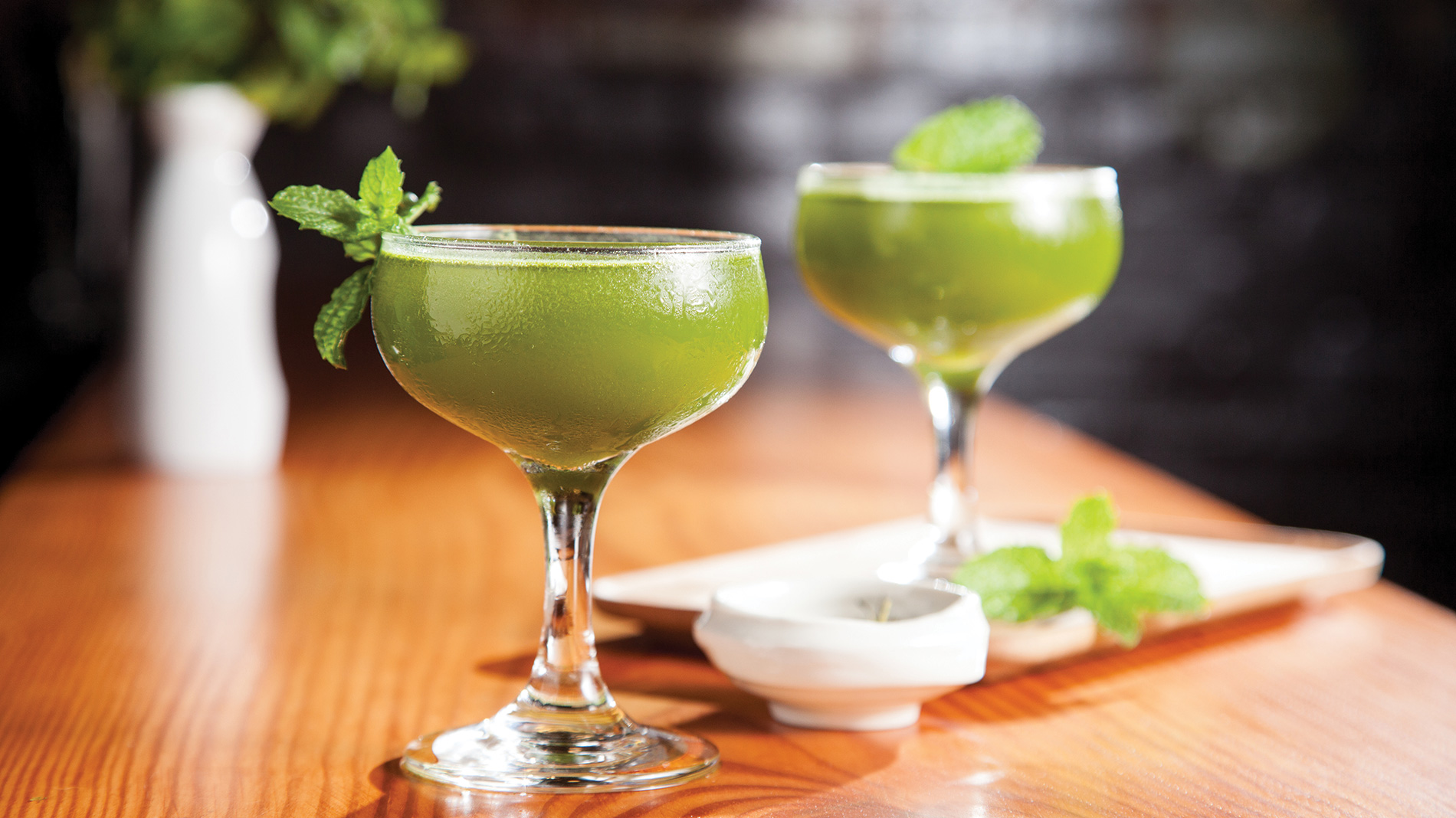 vista ramen's matcha gonna do for me? cocktail photo by jonathan gayman

1. Go Green
Teatime and happy hour combine in green tea cocktails. Matcha is found in Retreat Gastropub’s Brainfreeze Culprit, which combines the vibrant green tea powder with rum, sherry, pineapple juice, cacao and coconut. We also spied it at Hiro Asian Kitchen, in a matcha mint julep. Green tea-infused vodka gets fresh at Rooster with apple, lime, pineapple and cucumber in the Green With Envy, while Water Street uses it in its Sweet Pea along with snap peas, dandelion liqueur, mint and lemon. Meanwhile, the drink team at Vista Ramen doubles down, using matcha and cold-brewed green tea stems in the gin-based Matcha Gonna Do For Me?

3. Concept Menus
Themed drink menus may seem like a marketing gimmick, but one sip of these exclusive cocktails will sell you. Pouring Ribbons in New York has been traveling with a themed menu series, hitting Route 66 and the Silk Road. Closer to home, Olive & Oak’s Gilligan’s Island-themed menu is a boozy voyage that includes a Three-Hour Tour, while sophisticated takes on college drinks were the star on Planter’s House’s spring break menu earlier this year. Recent menus at Blood & Sand have been based off everything from ninth-century Viking trade routes to popular music, and dedicated tiki menus have been found on bar menus from The Libertine to Taste to Retreat Gastropub.

4. Taste the Rainbow
Brewers are getting experimental, fermenting some of their classic base beers with fresh fruit. Side Project Brewing Co. has released raspberry, peach, blueberry and, most recently, apricot versions of its flagship Saison du Fermier. Over at Perennial Artisan Ales, Funky Wit has seen raspberry-rhubarb, raspberry, apricot and melon varieties, while fans of 2nd Shift Brewing’s Katy can try a veritable fruit salad of blackberry, peach, cherry and raspberry varieties. Looking for an insider taste? Rumor has it that 4 Hands Brewing Co. has quietly released infrequently available strawberry- and blueberry-inflected kegs of City Wide at its tasting room.

5. Basque Wine
Txakoli, a super dry, acidic white from Spain’s Basque region, has popped up on menus and in shops all summer. Union Loafers Café and Bread Bakery offered the crisp 2014 Xarmant Txakolina with barely-there bubbles on its summer wine list, while Reeds American Table still has two Txakolis to try. 33 Wine Bar has three of these Basque beauties on its September wine list, including Gorrondona Txakolina.

Miss Part 1? Click here to find out what else in trending in the STL beverage scene.