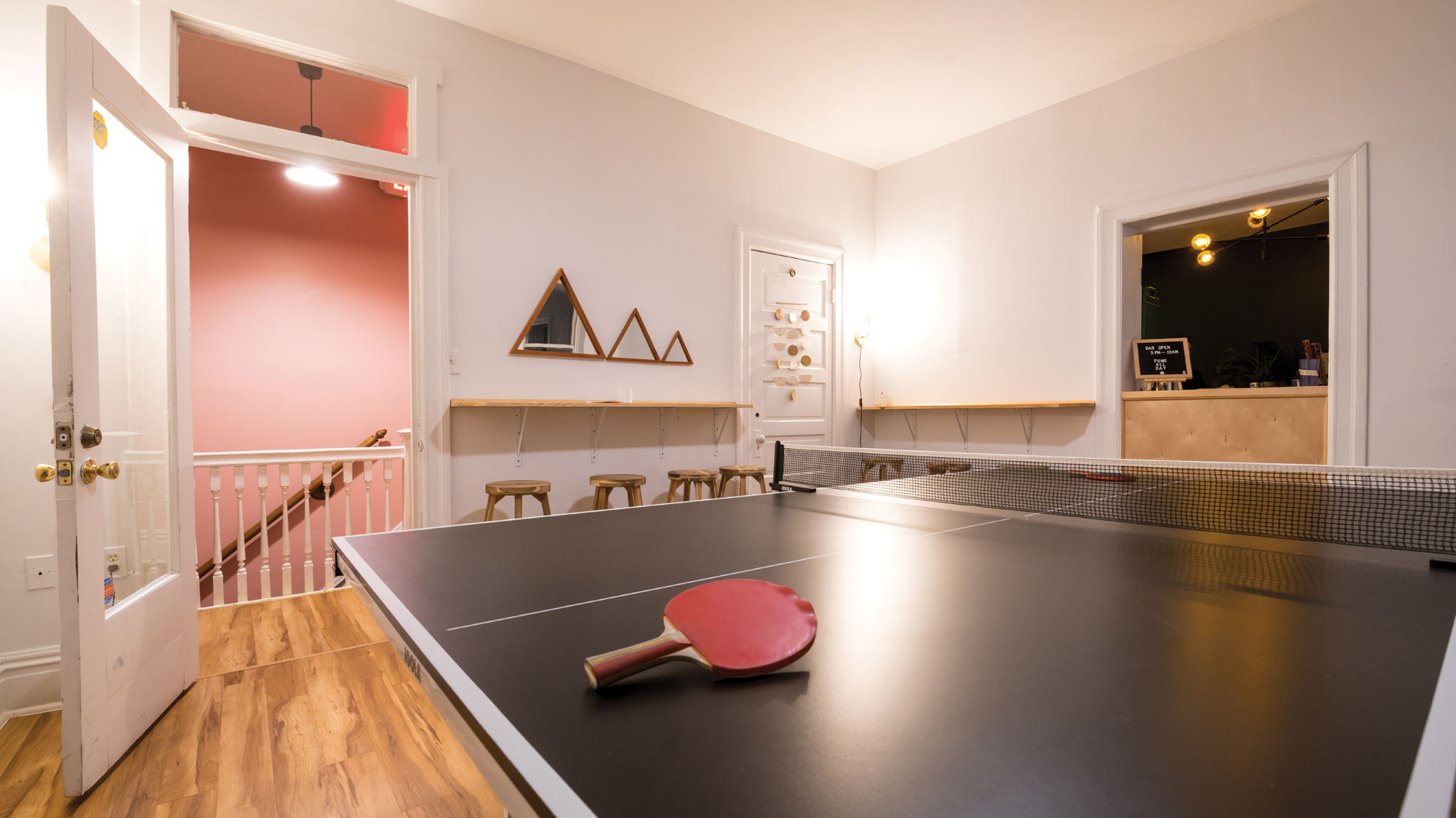 There’s something about an easy, intimate night at a friend’s house that can’t be beat, and Lulu’s Pingpong Bar strikes that tone of comfortable, cool, relaxed fun.

The bar is an upstairs addition to Lulu’s Local Eatery, the South Grand favorite for vegan comfort food. Previously an accounting office, it features three separate rooms – one with a small bar and two for pingpong. With warm, wooden floors, large windows with crisp, white trim and crown molding, it retains a homey vibe as charming as every Tower Grove house I’ve been in.

The pingpong isn’t an afterthought. Each room is large enough to play comfortably, but not so big that you’re constantly chasing the ball. The rooms also feature a slim bar shelf affixed to one wall and a few high stools so onlookers can hang out and watch the action.

The cocktail program matches the feel that you’re at a cool friend’s house party. There are four trendy-but-straightforward signature drinks, well-executed but not overly complicated. The menu changes seasonally, but the overarching theme seems to be an embrace of fresh, herbal flavors.

The basil whiskey sour, a peppery twist on the classic with basil-agave syrup and fresh basil, is balanced but not too boozy – perfectly calibrated and not so sour you have to take microscopic sips. Similarly, the pineapple ginger fizz has an herbal, effervescent punch from pineapple-turmeric kombucha and a hint of warmth from fresh ginger.

The benefit to this simple approach is that you don’t have to waste time waiting for your drink instead of diving into a pingpong match. I also appreciated the size of the cocktails. Unlike some trendy spots, Lulu’s drinks are generous enough that you can focus on hanging out with your friends instead of repeatedly shuttling back to the bar for another round of tiny, expensive concoctions.

Food from Lulu’s can be ordered and enjoyed upstairs, as well. Although the menu is strictly vegan, it’s approachable for all diners, with delicious meatless riffs on plenty of late-night bar favorites. The utterly addicting Buffalo cauliflower bites, served with ranch dipping sauce, may be even better than their chicken counterpart.

Another winner is the loaded nachos. Jackfruit carnitas takes the place of traditional pork, while the “cheese” is a house-made creamy butternut squash sauce. Piled high with salsa, green onions and other typical nacho toppings, it’s hard to stop taking just one more bite.

Although guests are welcome to play pingpong at any time during Lulu’s normal business hours, the upstairs bar pours drinks from 5 p.m. to midnight Monday through Saturday. It can get crowded on the weekends – you’ll want to get there early to snag a table, or be prepared to wait.

Stephanie Zeilenga is a critic and contributing writer for Sauce Magazine.