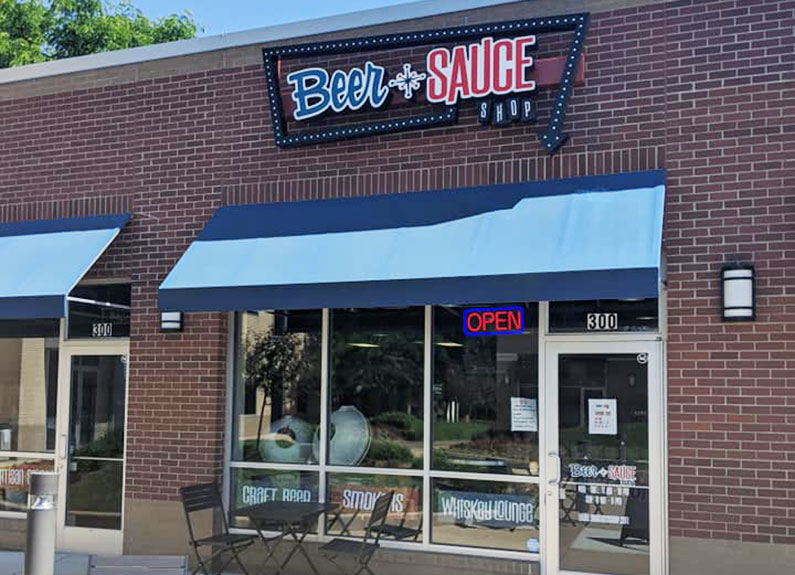 BeerSauce Shop, a St. Peters establishment known for its craft beer, bourbon and sauce tasting experience, opened a second location at 3880 Lindbergh Blvd. in Sunset Hills in mid-May and will open a third location in Ballwin later this year.

Fans of BeerSauce, which opened in St. Peters in 2017, can expect the same interactive flavor tasting experiences at the new location. There's a rotating selection of over 600 craft beers, 250 artisan barbecue sauces and rubs, and 60 local and regional selections of whiskey.

“We enjoy teaming up with folks who have a real passion for what they’re doing,” said founder and co-owner Andrew Tessmer about his Sunset Hills business partners, brothers Danny and Jeff Gustafson. “[They] are passionate about beer and barbecue just like we are, and we’re excited to see them [run] day-to-day operations.”

BeerSauce Shop has also signed a lease for a third shop at 14738 Manchester Road in Ballwin to open in fall 2020. “We’re hoping for September, but you know how that goes,” he said.

“Our vision has always been to bring BeerSauce to all the [St. Louis] communities,” he said. “We hope to continue opening St. Louis locations, and we have our sights set on Springfield and Kansas City as well. … We’d like to have one in either Springfield or Kansas City by end of 2020.”

Each BeerSauce Shop location will serve BeerSauce favorites like the bourbon French dip and barbecue nachos but will also feature two items unique to that particular location. Sunset Hills visitors can enjoy the bacon flight, eight slices of a rotating flavor of bacon on toasted bread, and the burnt end sandwich, a half pound of burnt ends served with hot pickles and toasted bread.

BeerSauce Shop has made accommodations to their mode of tasting due to COVID-19. Staff members wear masks and implement social distancing procedures, and sauce-tasting bars will remain closed until it is deemed safe to reopen. Instead, guests who wish to sample sauces and drinks can ask for a sample in a single-use cup.

Visitors can enjoy their tasting experience in various lounges devoted to beer and bourbon. Tessmer describes the Sunset Hills location’s design as midcentury modern. Notes of blue and orange, the colors of BeerSauce’s logo, will accent stainless steel and the shop’s sleek ambiance.

“We’ve got four nice whiskey lounge chairs and a little fireplace so folks can cozy up and hang out – that’ll be popular in winter,” he said.