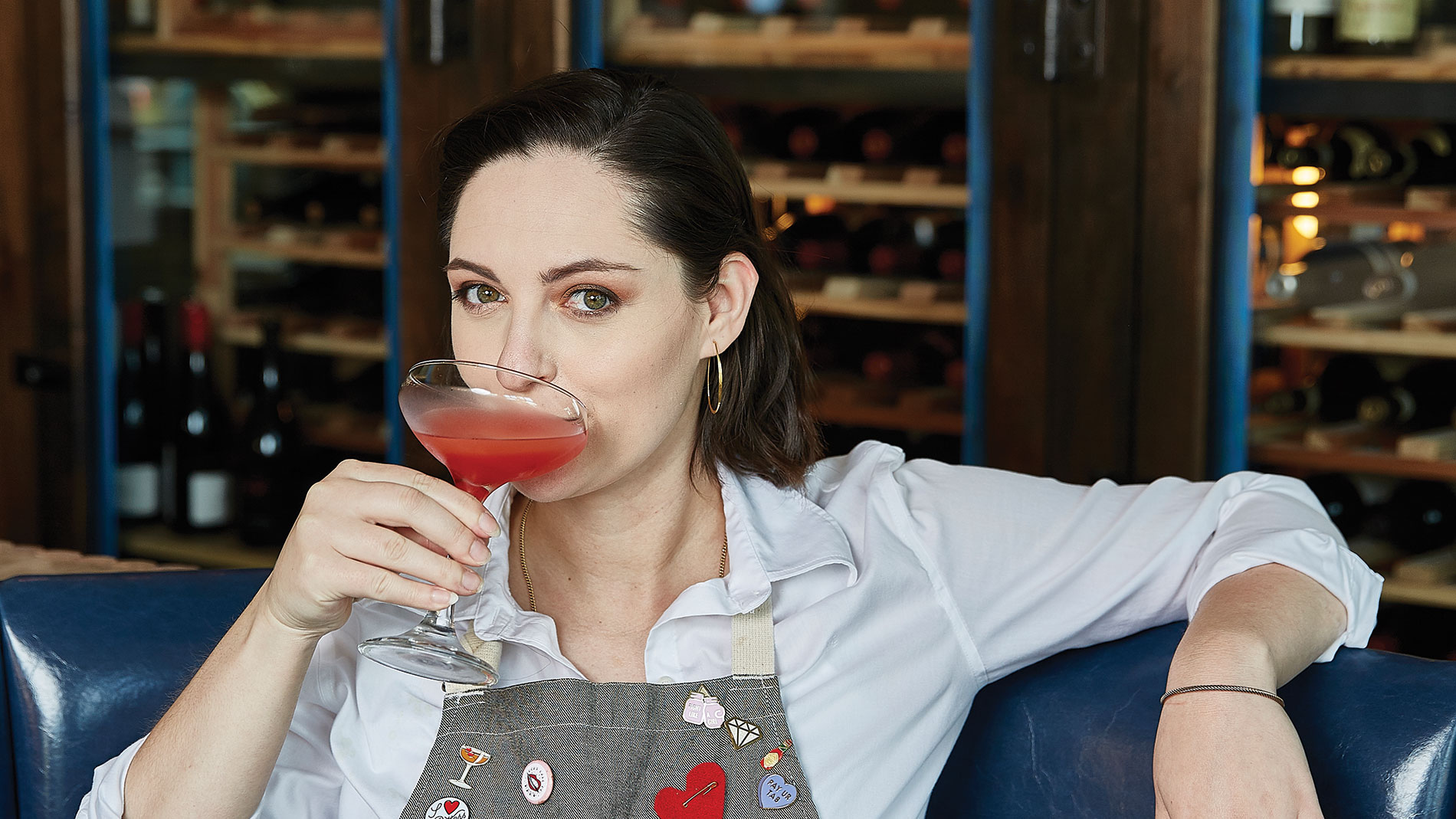 When most children are 8 years old, they’re taking down limitless amounts of soda and candy and fantasizing about what their school cafeteria might serve for lunch. When Morgaine Segura was 8, she was discovering wine and mastering the Negroni.

Her playground was her mint-filled backyard and her play dates were with industry professionals at her parents’ parties. Her mother was a photographer for bars and cocktail competitions, so it only made sense that the staff of Sanctuaria would wind up at the Seguras’ house on Derby Day and the Fourth of July.

In addition to the parties, Segura was receiving sommelier training from her father, who had been taking level 2 classes. “He would bring a bottle of wine home after his class and he would go through our kitchen cabinets and pull out a bunch of different spices and herbs,” Segura said. “We would have to go through and pick out what we could smell in the wine from the herb and spice containers. I use those skills often.” Though she did not imbibe many of those drinks, she began to love what they meant for her. While most kids her age were deciding to be astronauts or firefighters, Segura knew she wanted to be a bartender.

She started by working as a dishwasher at Morgan Le Fay’s Tapas Bar & Lounge in Town and Country when she was 14. “I was like, ‘I’ll do anything,’” Segura said. “I would go up on my day off and ask questions. I tried to force my way into it, but I was too young to do that.” Soon after, she found herself working in a tap room in Vermont while attending college; then it was a short stint in New York City. But it was back in St. Louis that she officially found her door to the big leagues: barbacking at the Moonrise Hotel.

“It was kind of like any fantasy that I had about bartending,” Segura reminisced. “It was fast-paced – a party bar.” While working, she observed bartenders Seth Wahlman and Charlie Martin. Watching them, she took in lessons about speed and quality. It was almost like a boot camp. “I was like, ‘Alright, these guys are putting out really awesome drinks so quickly. It’s five deep right now and they’re making six-touch cocktails. I don’t believe this.’” She was overwhelmed and felt that she may never be as fast or confident as her new mentors, but she persisted. As she increased in confidence, she also got to know Martin better. “I would definitely say we both had a crush on each other, but it took a while because we didn’t want to date someone we were working with. We tried to not for a long time.” But after about eight months, they did start dating. They got married in 2017.

While still working full time at the Moonrise, Segura started hosting at The Libertine to study cocktails with bartenders like Ben Bauer and Naomi Roquet. The Clayton restaurant’s more eclectic bar offered new opportunities to go deeper and refine her skills. “I never bartended there, but I feel like I interviewed them a lot,” Segura said. “I would go in on my days off. [Bauer] would teach me how he does things. We would work Sunday brunch, and when it was slow, [Roquet] would let me taste all the spirits.” After work, she’d retire elsewhere to decompress and drink. Her favorite spot at the time was the recently opened Olive + Oak.

“Charlie took me there on one of our first dates. I was super confused about why he was taking me to the county, what we were doing this far west,” she said, laughing. But after one trip she was sold. Olive + Oak became her regular post-shift hangout, the endgame of a mad rush from The Libertine, which closed at 9 p.m., just an hour before the Webster Groves hot spot. She and her friends would enjoy chef Jesse Mendica’s dynamic New American menu and sip cocktails from bartender Chelsea Little.

One day, as she contemplated her love for her new favorite restaurant, something clicked. If she liked Olive + Oak so much, why not just work there? She filled out an application, but was discouraged when nobody contacted her. “I knew that I didn’t get it and I was like, ‘Whatever,’” Segura said wistfully. “I had moved up to bartender at Moonrise.” Six weeks later, the phone rang.

She started as a bartender at Olive + Oak, but quickly secured the position of bar manager. “I don’t know that I ever set out wanting to be a bar manager,” Segura reflected. “I’m maybe a little bit bossy and I naturally want to organize things.” The position gave her the latitude to think about what kind of bar she wanted to run, so she approached owner Mark Hinkle with some ideas. “Can I be OK to, like, change some stuff?” she asked him. “Of course,” he said.

She strived to add more consistency measures and started to develop a pedagogy for the bar staff built off of her own learning experiences at the Moonrise and The Libertine, and her childhood home before that. Rather than teaching her bartenders a menu, she wanted to give them a base of knowledge, a background for the drinks they were making. Instead of drilling into her bartenders a particular cocktail’s list of ingredients, for example, she’d explain why a specific bourbon was the best choice. “I’m trying to help raise another generation of bartenders,” she said.

Segura also beefed up the staff, which included convincing Martin to follow her to Olive + Oak. “I tried to get him to work there pretty much as soon as I started,” she said. “It’s a great place to work and I wanted Charlie to experience that too.” At the Moonrise, Segura and Martin had only worked together about one shift every other week since there were multiple bars. But Olive + Oak had one small bar. “I always say that it exhilarates our relationship. We spend all our time together,” she said.

Though she adored her new home, she knew it wasn’t perfect. There were some issues with the equipment, and the space and seating were limited. “The beer drains… there wasn’t even a drain. It was just a hole that was leading straight to the bottom of the cooler that had a golf tee wrapped in plastic wrap in there,” she explained. So she took it as welcome news when Hinkle announced he was going to move Olive + Oak to a new location and wanted the staff to help design the bar.

“We had a pretty decent amount of input,” Segura said, and the bar team got a lot of what they wanted, including a 24-seat bar – twice the size of the former one – and a massive walk-in cooler.

“Everything is so pristine,” Segura said. “The way that everything is set up is just going to make it so easy for us to do our jobs, and so possible for us to put out 400 cocktails a night, if that’s what we need to do.” Now, when customers are five deep, ordering six-touch cocktails, she’s the one the other bartenders are watching.

Even with a brand new space to play in, Segura and Martin still discuss fantasies of opening their own bar one day. “We would have a big list of classics, some funky wine, lots of cheese,” she speculated. “We pick out buildings that our bar would go into all the time.” In her mind, Martin’s background in finance combined with his charm with customers make him a sure bet for success in managing the spot. Plus, she and her husband have already mastered working together. “I think it’s really cool to feel like I don’t have to censor myself as much,” she said. “We can be open and really honest with each other. He’s like a coworker that you 100% trust and who has your best interest in mind.” Still, among all the unknowns, Segura is sure of two things: Wherever she is, she’ll always want to be behind the bar 60 hours a week, and Martin will have a bar “one day soon.”

There’s something else she and Martin are going to have one day soon: a baby. She’s due in December, but that hasn’t stopped her from charging full force into the new Olive + Oak space and making it her own. Segura has come full circle, from a child dreaming about gin drinks and mint gardens to a woman teaching a fleet of younger bartenders to make cocktails she’s can’t currently drink. “It’s a refreshing break,” she admitted. “I haven’t not drank in a long time. It’s a new perspective.” She’s certainly earned a break.