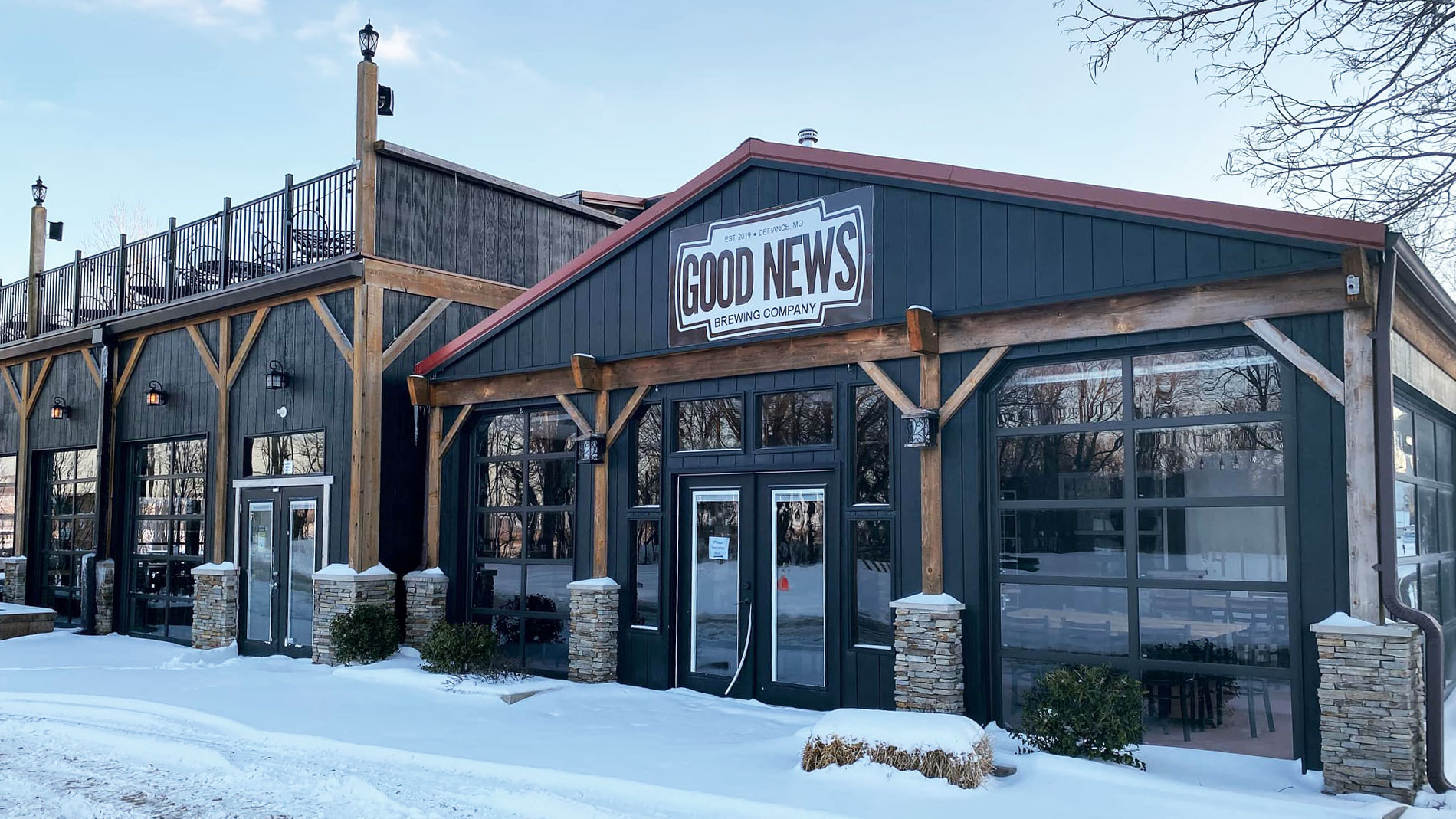 Good news! This spring, Good News Brewing Co., which has a location in O’Fallon, Missouri, and another in Defiance, is opening up a third location at 5521 Water St. in Augusta, potentially in April, in the space formerly known as Augusta Brew Haus. Guests will be able to enjoy wood-fired oven eats and brews made on site in the renovated indoor space, on the covered patio or at the shipping container bar outside.

Like the other locations, Good News Brewing Augusta will have a wood-fired pizza oven, but the team plans to use it for creative dishes beyond a basic pie unique to this location, including specials like flatbreads with smoked meats, as well as a variety of other wood-fired dishes like smoked wings, brisket tacos, pineapple-jalapeno pork tacos and smoked sausage.

Co-founders and co-owners Dan Tripp and Matt Fair started experimenting with home brewing together in 2014. Slowly, they expanded their operation and began to host a brewing party once a week for friends and family. “The idea was just to gather with people, make beer, eat pizza and share good news,” said Tripp. As these get-togethers grew, Tripp and Fair decided to turn their project into a real business, still with the goal of spreading good energy and good news.

When they opened their first location in O’Fallon in 2017, they were still using a homebrew system to produce all their beer. Tripp explained that it was “a pretty sophisticated homebrew system – it wasn’t your typical homebrew.”

The demand for Good News beer grew quickly. “We were selling more beer than we could make,” Tripp said. They began contract brewing – allowing Missouri Beer Co. to make Good News’ recipes – in order to keep up with demand, but eventually realized they simply needed a bigger space. As a result, Good News Brewing Co. opened its Defiance location in 2019, which houses a seven-barrel brew system. (The owners also operate a spinoff cafe called Alpha & Omega Roasting Co. in O'Fallon.)

When the pandemic hit, like many other businesses in food and hospitality, Good News had to pivot its product and services. Accordingly, they began offering delivery and canning their beers for easier distribution and enjoyment from home. Yet again, “we’d outgrown our space,” Tripp said.

Suddenly, Good News did not have enough physical space to keep up with production levels, and a search for a new warehouse ensued, leading them to Augusta. Because the Augusta Brew Haus was one of the first breweries in the region, the location is somewhat of a historical site. It’s been bought and sold by a few owners since its establishment in the early 2000s, but, to Tripp’s knowledge, Good News will be the first to actually brew beer in the space.

Additionally, Augusta is up and coming. Along with Good News’ anticipated opening, according to Tripp, Naples, Florida-based investor David Hoffmann is focused on “trying to make the Missouri wine country a national destination.” Hoffmann has already bought several wineries and plans to invest in a trolley system, a five-star hotel, a golf course and other attractions in the area. “He’s excited about us, and we’re excited about him,” Tripp said.

While Good News Brewing’s Defiance location will still be its largest site with room for 300 people amid 7,000 square feet, including the patio and rooftop deck, the Augusta spot will be able to hold about 250 guests between the indoor and outdoor spaces totaling 1,500 square feet indoors, along with ample outdoor seating on multiple levels.

The Katy Trail runs through both of these locations, and Tripp recommends doing the nine- to 10-mile bike ride between the two venues. He suggests you park at the Defiance location, bike to Augusta, “get a beer, bratwurst and pretzel, and then bike back to Defiance and get a pizza and some more beer.”

There’s also a series of events planned for Good News this year, including a 5k and 10k on the Katy Trail on March 13, the same day as a St. Patrick’s Day festival. Come fall, be on the lookout for the Annual Sausage Fest, the Augusta Fall Festival and an Oktoberfest celebration. Stay up to date by following Good News on Instagram and Facebook.