Walking down a liquor aisle can be like perusing a deluxe box of crayons. Liquor comes in just about every color you can dream of – and more. One of the most distinctive and best known of these colorful spirits is Chartreuse, notable because of its striking yellow or green color. Yellow is mellow, but here we’ll focus on the green Chartreuse.

Chartreuse comes to us from the Carthusian Monks of France, an order founded by St. Bruno in the late 11th century that has survived into this millennium. At any given time, up to present day, only the top three monks in the order know the secret recipe that combines over 130 herbs, flowers and spices to make Chartreuse so intriguing. The monks, however, are under a vow of silence, so the recipe will never be made public.

Chartreuse has gained a name for itself at the hands of a slew of public and historic figures. Christopher Columbus planned his famous voyage to the New World in a Chartreux monastery in Spain. Czar Nicholas II of Russia liked a splash of Chartreuse in his Champagne. Former French President Charles De Gaulle used to indulge on chocolate candies filled with green Chartreuse, and author Hunter S. Thompson made green Chartreuse his liqueur of choice. Most recently, director Quentin Tarantino featured Chartreuse in the movie Grindhouse.

To put to rest a common misconception, the liqueur Chartreuse came before the color. Its color is a distinct forest green that’s just a shade darker than absinthe. Believe it or not, its color comes from chlorophyll, the substance that also gives plants their green hue. (Yellow Chartreuse gets its color from the addition of saffron into its herbal mixture.)

When smelling and tasting this liqueur, be cautious of its high alcohol content; at 55 percent alcohol (110 proof), burying one’s nose right into the glass is a good way to numb your sense of smell for a few hours. But when smelled gracefully, the aromas from this liqueur show nice anise and oak distinction, with a hint of herbal spice and sweetness. A slight smell of mentholated mint results from a deeper journey into the glass. Herbal tea with mint also comes to mind.

With so many herbs in the mix, the taste is distinctive: Anise and citrus are up front; a hot, minty spice follows. An herbal sweetness lingers on the finish, aggressive on the palate.

Absinthe-lovers may find Chartreuse familiar, as it’s one of the closest products to real absinthe. Given the similarities between the two, Chartreuse could be served in the same way absinthe is, and using cold water to melt sugar cubes into the green liqueur would cut through some of its stronger herbal characteristics.

Chartreuse is most often enjoyed over ice or as a shot, but a liqueur like this deserves a unique and assertive cocktail. The strong flavor of Chartreuse can easily overpower most common ingredients, so the trick is finding something to complement its assortment of tastes; a fruit-based liqueur works well.

The next time you walk down that colorful liqueur aisle, keep your eyes open for the distinctive color of Chartreuse. 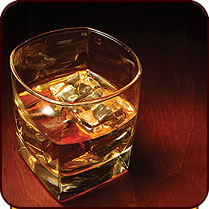 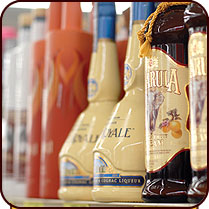 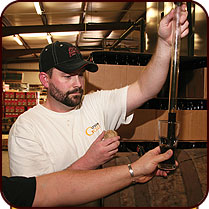