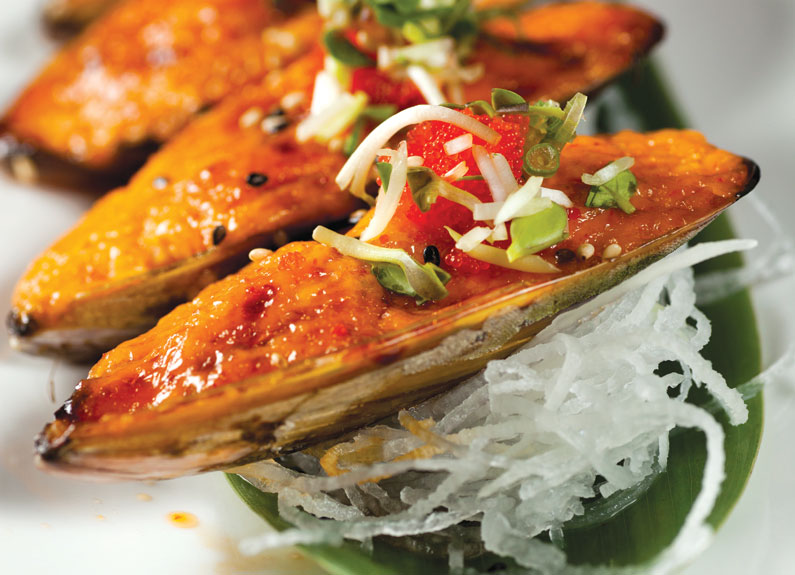 During the Edo period of Japanese imperial history, Kabuki was the name for the popular theater of the working class, marked by stylized movements and striking makeup. At Kabuki Sushi & Fusion, the artful food and modest prices speak to the avant-garde theater for which it was named.

The Set
A traditional sushi bar doubled as a counter for ordering gargantuan chocolate-tinis, Bud Light bottles and a few decent sakes. The subtle, modern décor was relaxing, but it’s tough to shake the feeling that you’re inside a Ballwin strip mall.

The Plot
In a world that throws around the word “fusion” all too often, Kabuki’s menu exemplifies it – melding various ingredients and cooking techniques of Thailand, Japan, Vietnam, China and Peru.

Act 2:
Spicy baked New Zealand mussels Equally as applause-worthy, these large mussels were sprinkled with scallions and a dollop of an evocatively spicy mayonnaise, gently baked, and finished with bright orange masago roe.

Ha: culmination of events
Act 3:
Sushi From the exquisite knife skills displayed on the red snapper, scallop and mackerel nigiri to the artful presentation, the sushi was stunning. Some was plated atop bright green banana leaves, others perched inside tiny nests of fresh radish curls. A salmon avocado roll was beautifully marbled with a gorgeous pale orange hue, its meaty elegance wrapped in nori.

Kyu (final bow)
If you’re smart, you’ll end your meal with the mochi – frozen Japanese rice dumplings filled with ice cream – and pick the sweet-savory blend of green tea and red bean. The dumplings, pale in color, were quartered and crowned with whipped cream and a sprig of basil that was refreshing and satiating to the palate.

THE TAKEAWAY: By the time the curtain fell – we mean, the check arrived – we wanted to give the whole meal a standing ovation. While it was hard to forget the strip mall setting, Kabuki’s food was beautiful to the eye, pleasing to the palate and well worth the price of a ticket.