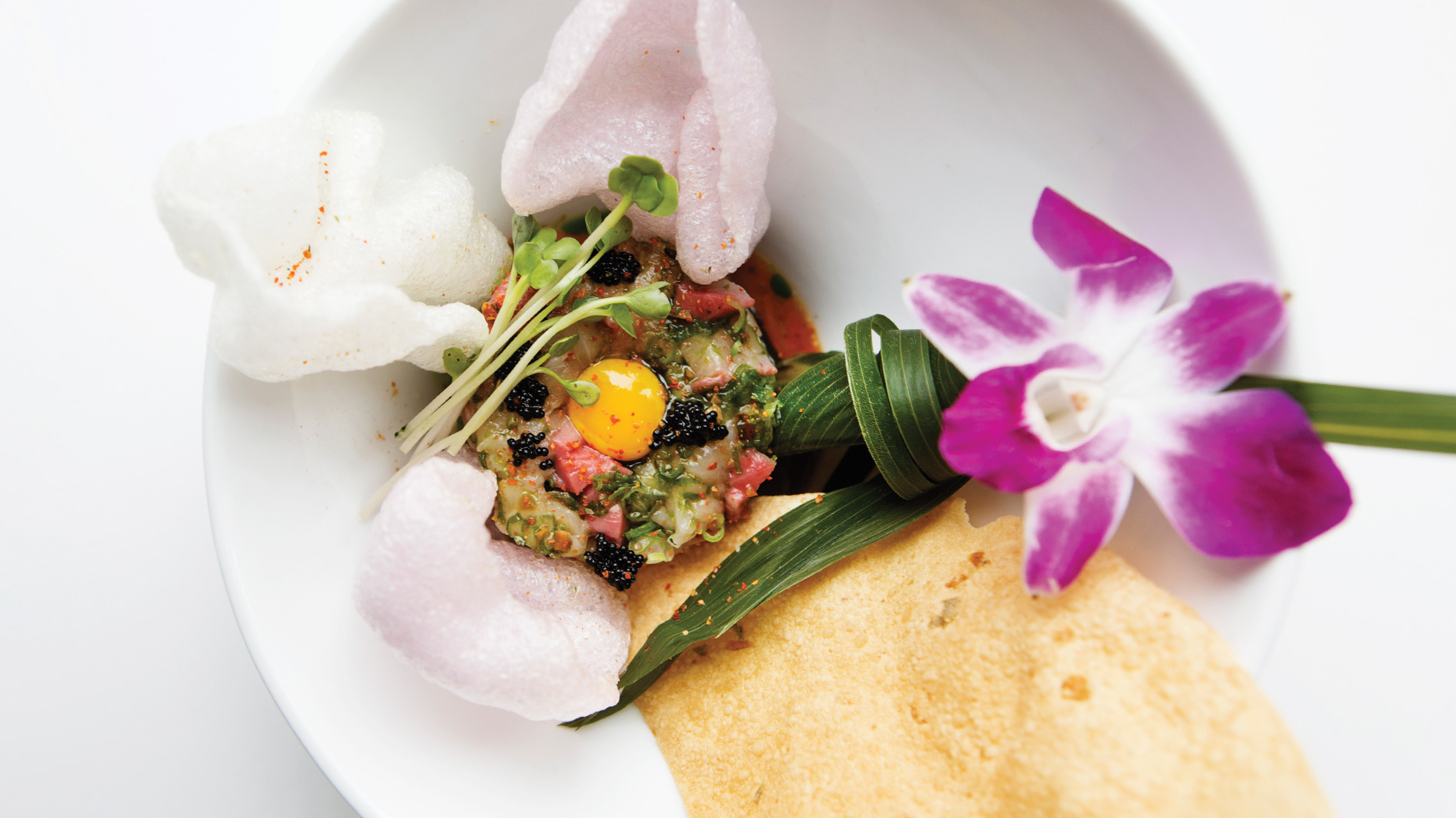 With restaurant eclecticism now as varied as a grocery store aisle, sushi is no longer the weird uncle of the St. Louis culinary scene. Arguably, a cuisine has arrived when even its standard dishes, say, California or Philadelphia rolls, are looked upon as a safe province for beginners.

At BaiKu Sushi Lounge, located inside Midtown’s Hotel Ignacio, you’ll find both rolls and many others, known in the business as makizushi. And like the other 17 selections from the classic maki menu, they will be fine, nothing revelatory, but all competently prepared and satisfying. The same goes for the standard nigiri (two pieces per order) and specialty nigiri (one per order), as well as the sashimi (five per order).

If a Philly roll is the sushi equivalent of drinking SoCo, then executive chef Soung Min Lee’s eight offerings on the specialty rolls menu are more akin to top-shelf bourbon. This is where enthusiasts congregate. The intricately constructed Onii-san roll, crammed with lemon-garlic crab, gobo root, cucumber and avocado, came topped with salmon drizzled in ponzu sauce and, like buttons down the center of a dress shirt, thin jalapeno slices with chile aioli. After a searing by a blowtorch, the roll is crowned with bits of red tobiko and slivered scallion. This wasn’t a fireball so much as a firecracker; the heat emerged on the sly before ultimately being tamed by the cooling bits of cucumber and avocado.

Connoisseurs will remember Lee from Clayton’s now-closed Miso on Meramec, where he displayed his sushi skills in fine fashion. (Miso’s owner Brad Beracha is now co-owner of BaiKu.) They will also gravitate toward Lee’s five types of signature nigiri, one-bite wonders with a bit more whimsy and creativity than your standard nigiri. Deep crimson bigeye tuna gets the big treatment from a drizzle of toasted garlic soy and white truffle oil, strands of enoki mushroom, crunchy black tobiko and a delicate wisp of scallion. The thinly sliced, mild octopus nigiri is admirably punched up with a piquant red chile-citrus sauce, black tobiko and scallions.

Rice is the khaki pants of Japanese cuisine. But BaiKu’s sushi rice, seasoned with rice vinegar, salt, sugar and mirin, is another animal – some would say art – entirely. It glistened, was never gummy and subtly complemented the fresh fish. Flying fish in six days a week, as BaiKu does, often brings something different, as it did one evening when cobia, a mild, white-fleshed fish, arrived to the table so clean-tasting that the thought of adding even a splash of soy sauce seemed sacrilegious.

A well-known chef adage is that we eat with our eyes first, a saying never truer than with Lee’s Negi-Hama Tartare and Tuna Tiradito, two of the menu’s small plates. The tartare consisted of diced green onion and yellowtail formed into a disc, sprinkled with black tobiko and Japanese seven-spice (shichimi togarashi) and topped with a tiny, bright yellow quail egg. With puffed prawn chips for petals and a thin slice of crispy fried papadum for a leaf, the dish’s look and flavor resembled the orchid garnish on the plate – full of texture and peachy, fleshy hues. Allowing the tuna to warm up a bit brought out more of the flavors. The tiradito was just as visually appealing: eight small rectangles of lightly seared bigeye tuna drizzled with ponzu and chive oil, all glistening on the glass plate like precious rubies. Each gem was topped with a toasted garlic chip, a sprinkle of shichimi togarashi, black tobiko, scallions and spooled daikon – and each morsel was the perfect marriage of crunch, spice, tang and chew.

The Kobe beef sliders were an unexpected surprise. Served on three grilled Hawaiian sweet rolls with a soy-ginger glaze, mirin pickles and onion crisps, they’re just the sort of meaty chew you’d crave after a couple of beers and bites of raw fish. Lobster dumplings – six star-shaped, bite-sized bundles topped with red tobiko and bathed in a sweet soy reduction – looked nearly too good to disturb in their bamboo steamer bowl. But gone they were, and quickly.

With an extensive beer and wine list and an eight-item sake menu that allows for experimentation, especially with sashimi, drinking at BaiKu can take several forms. But if you want hot tea, the traditional sushi pairing, you’ll have to settle for the standard loose green stuff.

Most sushi houses nowadays are more lounge than restaurant, designed for drinking, noshing and looking cool. Enter BaiKu and you might think it’s one of the latest cocktail lounges. The space flows from the small first-level dining area gently up a few stairs, where BaiKu shares its lounge space with the hotel and Triumph Grill. The sushi bar, a scant four seats, is tucked to the side of the dining area. It’s not so much an afterthought as it is a respite from the hubbub of the packed dining room on a busy night. It’s also the best perch from which to watch Lee and his team in action. In keeping with the motorcycle theme (baiku is Japanese slang for “motorcycle”), framed white-painted sections of a disassembled bike serve as a focal point above a long banquette. The lounge area proper is sleek and modern, with ottomans, comfy couches, low tables and a large contemporary enclosed fireplace slipped into the smooth stone wall. Eating in the lounge is like eating off your coffee table while sitting on the couch, which means you’ll be bending over a lot. BaiKu’s soundtrack – electronic lounge music curated by local DJs – thumps and pulses its way through the space, laying down a vibe worthy of the environs.

It’s all very chic and appealing, making it a convenient and distinctive spot for a late-night nosh and drink after a Grand Center event. But with Lee behind the sushi bar, BaiKu is just as much a destination, a vibrant setting with substance and style where sushi beginners and connoisseurs alike can rub elbows with equal satisfaction.

Entree Prices
Ranging from $4 for nigiri to $24 for entrees 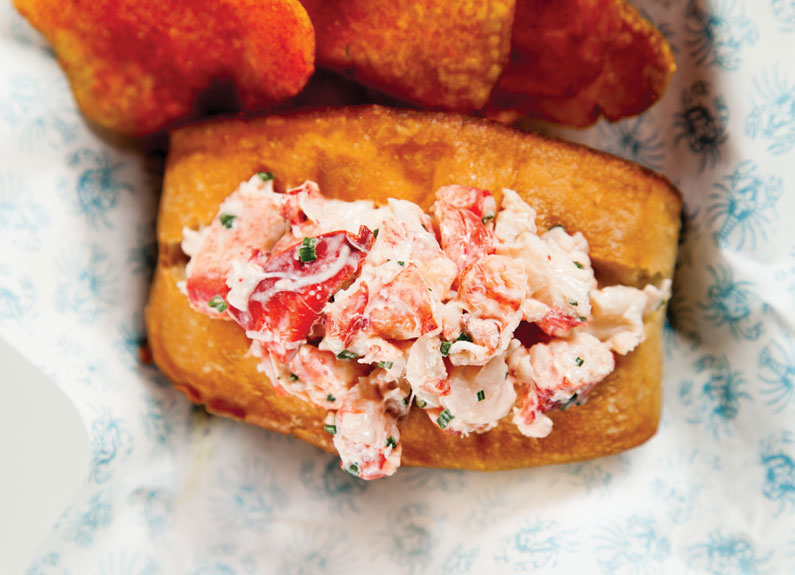