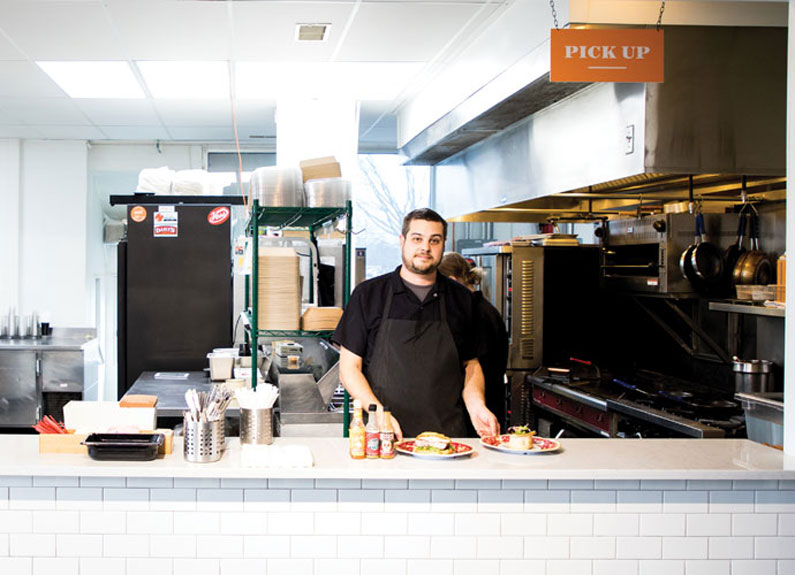 Judging by the recent proliferation of breakfast menus, either people are finally listening to their mothers about the most important meal of the day, or we’re witnessing the latest trend since fried chicken and striped bistro napkins. Regardless, for me, breakfast encompasses the optimism of the morning. At Yolklore, a quaint fast-casual breakfast-brunch spot in Crestwood, the first ray of optimism arrived in the form of the Classic Breakfast: two eggs, griddled potatoes, sausage, bacon, turkey chorizo or ham and a biscuit blanketed with sage-sausage gravy.

In precious foodie speak, Yolklore is chef-driven, a term used to distinguish pedestrian, high-volume food from menus designed by chefs based on their personal styles and using purposefully sourced ingredients. That my eggs – with yolks as deep orange as the rising sun – came from Buttonwood Farms, the sausage, biscuit and gravy were made in-house, and my coffee came from new St. Louis roaster Dubuque Coffee, further dismissed equivalence with a typical diner breakfast.

The restaurant veterans behind Yolklore include John Bogacki (Old Warson Country Club, Bolyard’s Meat & Provisions); his wife, Mary Bogacki (Strange Donuts, Four Seasons); and Billy Oziransky (Four Seasons, Pi Pizzeria). Raising more than $20,000 with a Kickstarter campaign, the trio opened their tiny box of a restaurant late last summer in the tired strip mall where King Edward’s Fried Chicken and Fish sat before it moved down the street. Outside, drivers can pick up breakfast at the drive-thru window. Inside the smartly branded room, diners order at a counter, grab coffee and utensils and take a seat at the long, stainless steel communal table running the length of the restaurant before picking up their meal at another counter. A few tables and long bar provide more seating.

Mary Bogacki’s experience as a pastry chef shines with daily selections of breads and pastries, seasonal cream puffs and even chocolate cake for breakfast.

The three breakfast sandwiches named for each owner were more knife-and-fork affairs than hand-held edibles. The Johnny Ham Hands, with thick-cut ham, soft-fried egg and local greens spiked with spicy Devil Sauce aioli all cushioned between a cheesy sliced gougère, made other ham and egg sandwiches downright anemic in comparison. The raucous Billy the Kid put a slinger on a ciabatta bun (pork sausage patty, fried egg, cheddar cheese and a mess of meat and bean chili) while the Mary B.E.A.R. combined melty brie, apple butter, arugula, soft-boiled egg and tangy pickled red onion on the same bread for a tamer, more cosmopolitan wake-up call.

Desperate to sample Yolklore’s pancakes, I ordered the Lil Dippers, a child-sized version of the Big Dippers (three versus six). Every pancake house should be judged against these hotcakes: fluffy, high, crispy on the outside yet soft and yielding in the mouth, with just discernable sweetness and a hint of vanilla. My desperation was triggered by the MO Garden Greens, which I had just finished. For some reason that made sense at the time, a salad for breakfast seemed like a good idea. Bright, fresh, local greens mixed with pickled carrots and herbs topped with three falafel cakes and a side of lemon vinaigrette, the salad was excellent, and made even more so with the optional added goat cheese. Had I waited until after breakfast, it would have made a lovely light brunch. Note to self: Always start with pancakes.

Think of the Nest Egg as a cross between a potpie and the egg-in-a-nest your mom made by cutting out the middle of a thick slice of bread and frying an egg in it. Here, flaky biscuit dough, formed and baked into a round shell, held two soft-cooked eggs, crumbled bacon, cheddar cheese and a smattering of greens. Slivers of pickled red onion and bits of preserved lemon cut through the richness for a one-of-a-kind signature dish.

Entrees are reasonably priced under $10 and include a choice of fruit or crispy griddled baby Yukon Gold potatoes. But with add-ons like smoothies, fresh juices and a pastry to share, breakfast for two can easily push $30, causing some diners to wonder why they’re eating chef-driven food out of compostable carryout containers, drinking fine coffee from paper cups and bussing their own tables, scraping food into a trashcan, careful not to accidently throw away the real flatware. Regulars who join the Coffee Club get a ceramic Yolklore mug hanging near the order counter, which is a little nicer.

Eating those remarkable pancakes out of a waxed paperboard basket was too much like the first (and last) time I ate McDonald’s pancakes off Styrofoam. There’s a visual and sensual pleasure involved in eating off a real plate. Unfortunately I’m seeing this more and more in upscale, fast-casual restaurants, especially breakfast and lunch operations. But to be perfectly honest, I’d eat those hotcakes off the stainless steel table if that’s how they came.