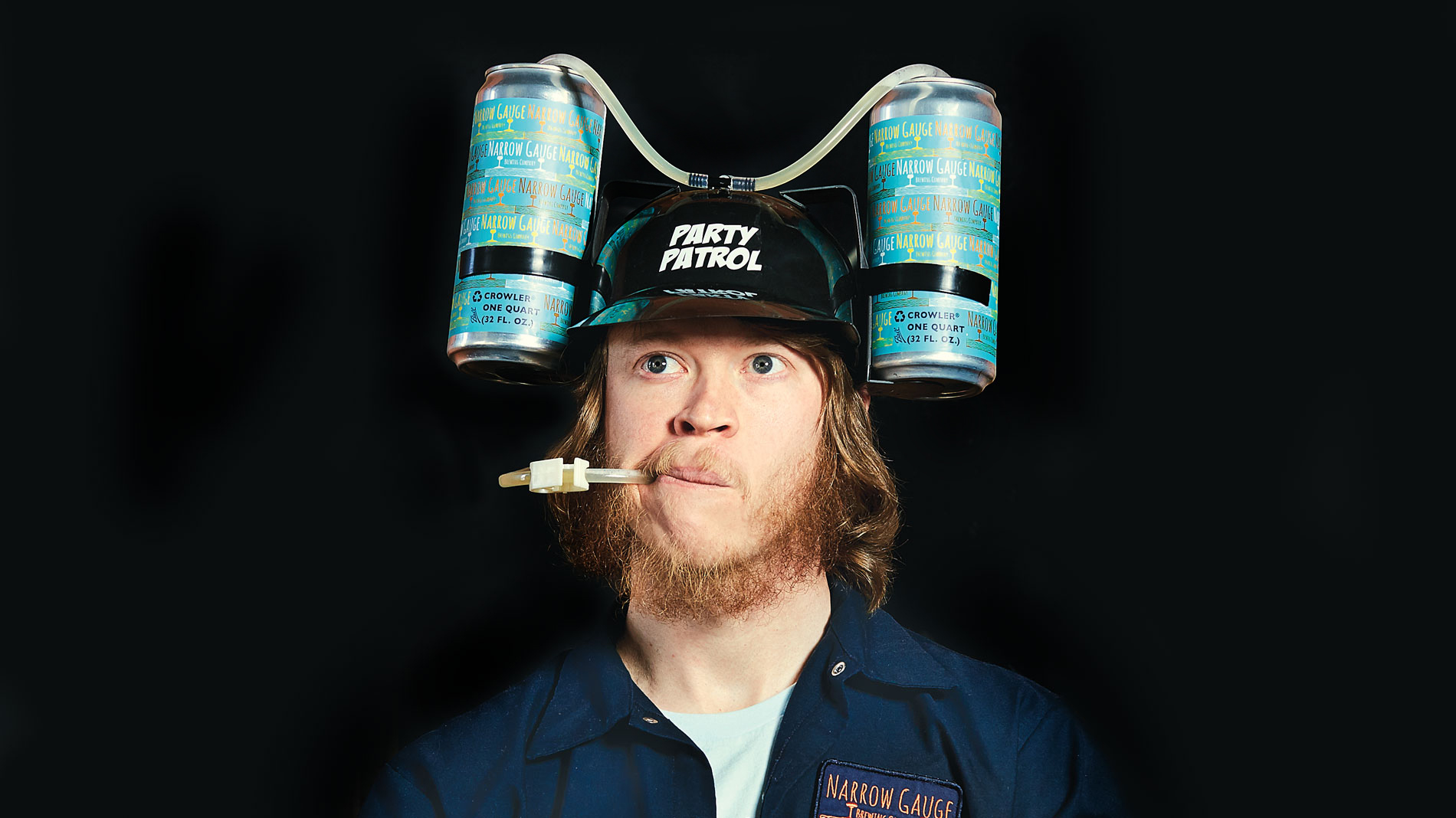 How Jeff Hardesty and his NEIPAs made Narrow Gauge Brewing Co. an underground sensation

On the stretch of Lindbergh Boulevard that cuts through the heart of Florissant, nestled among oil change places, big-box retailers and car lots, sits one of the region’s most unexpected craft beer destinations: Cugino’s family restaurant. Ringed by modest suburban neighborhoods and serving a mix of Italian-American favorites and classic bar food, it’s not exactly where you’d expect to find exclusive taps of trendy Northeast-style pale ales from one of Missouri’s top up-and-coming breweries. But there they are, and the beer nerds have followed.

This unlikely story began six years ago when Jeff Hardesty, the brewer and co-founder of Narrow Gauge Brewing Co., started a homebrewing habit and, like so many others before him, got hooked.

“I just had a fascination with the whole fermentation process,” Hardesty said. “As I read about it and was getting ready to actually brew my first batch, it became kind of an obsession, as far as the science behind it. It was really intriguing to me.”

Hardesty was working as a mechanical engineer for Winchester Ammunition at the time. He began poring over beer books, delving into the Internet searching for any brewing knowledge he could glean, and opening his mind to the marvels of yeast, grain and hops in his free time. He dreamed of one day opening his own brewery – somewhere rural with just a steel-frame building for a brewhouse and maybe a small tasting room.

But then he kept running into Cugino’s co-owners, cousins Ben Goldkamp and Dave Beckham, at beer events around town. The trio decided to partner up and try their hand at the brewing game, renovating a languishing banquet room in the restaurant’s basement to house the operation. Hardesty used his engineering background to navigate the mire of designing a brewing system in such an unlikely place. After plenty of trial and error, Narrow Gauge celebrated its first brew day on May 11, 2016, brewing batches of Old Town Porter and Mordecai, an American pale ale. Outside, the Cugino’s marquee now read “Home of Narrow Gauge Brewing Co.”


Hardesty hopes his beer’s popularity can do as much for his neighborhood as it has for the business. Hardesty has lived in Florissant since 2007, and named the brewery after the rail line that once connected the city to St. Louis to shine a light on the area. He’s even using wild yeast cultivated in Florissant for a few projects he’s working on.

“Florissant can get a bad rap sometimes, and I really don’t know why,” he said. “That’s one of my favorite parts of doing this here. We bring people up here to Florissant, and they realize it’s not what they think it is.”

Toiling below the restaurant floor, Hardesty is a one-man show, doing everything from schlepping grain to cleaning out the tanks to monitoring the progress of each beer as it makes its way through the brewing process. It makes for some long days, but the hard work has paid off. In less than a year, Narrow Gauge was awarded a slot in the Beer Advocate Class of 2016 and was named Best New Brewery in Missouri for 2016 by RateBeer.

Hardesty’s a pretty self-effacing guy, and these accolades, though much appreciated, don’t seem to faze him. Not one for titles, he goes by “managing member” when pressed for an official moniker, because “it’s what’s on the paperwork.” But with all that humility comes plenty of drive. For someone who’s so laid-back and new to the world of commercial brewing, his vision of what he wants to achieve is crystal clear.

“My mentality is, I brew beer for the craft beer drinkers,” he explained. “I’m not trying to draw somebody in just to make a sale. My principle has always been that I’m going to make a good product and what will make beer enthusiasts happy. I don’t want to be stuck making something I don’t want to make.”

There are typically eight Narrow Gauge beers available exclusively at Cugino’s, varying from a porter to those Northeast-style IPAs and APAs – varieties Hardesty is extremely fond of. This hazy style dials back the bitterness and showcases the juicy, aromatic aspects of the hops, with plenty of citrus and tropical fruit on the nose and just a bit of bitter bite on the back end.


Cory King, brewer and co-owner of Side Project Brewing, has known Hardesty since his days as a homebrewer and is impressed with where Hardesty is taking his beers. “Not only is he taking on a hot trend, he’s making them his own,” King said.

Hardesty is particular about how his creations should be imbibed. Narrow Gauge’s beers can only be had by the glass or via 32-ounce growlers or crowlers (big aluminum cans filled to order) to go, depending on availability. Anything larger is a no-go.

“Not many people are going to drink a 64-ounce growler in one sitting,” he noted. “The last thing I want as a new brewery is someone to get a growler, take it home, pour one glass and then take it to a party and 20 people try a flat, oxidized version of our beer.”

For now, Hardesty is focused on maxing out his current brewing situation. He has an Imperial stout currently doing time in bourbon barrels and some wild ales – another one of his favorite styles – aging in wine barrels. He has six fermenters and believes another four can fit into the space, along with more bright tanks. Eventually, he’d like to upgrade to a six-barrel brewhouse. All of this would push production from the current 800 barrels a year to approximately 1,200 to 1,500 barrels annually. If Hardesty’s beer keeps flowing in this direction, Narrow Gauge may not be in the basement for long.