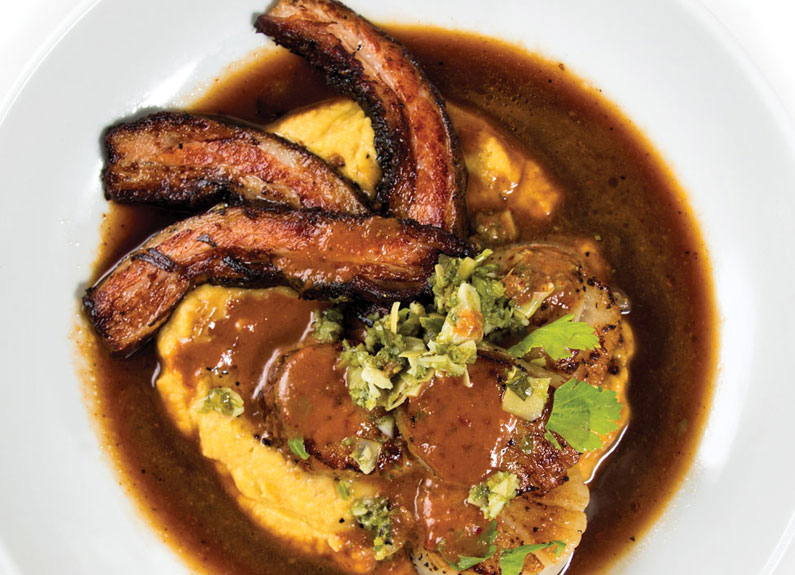 scallops with bacon at the blue duck photo by jonathan gayman

Review: The Blue Duck in Maplewood

The signature sandwich at The Blue Duck is the DLT, as in cured, smoked duck breast, lettuce and tomato. There’s also a fried egg and a swipe of honey-chipotle mayonnaise, all between two slices of buttery, grilled house sourdough. The duck is only available on the popular sandwich, which raises the question of why a restaurant would go through the trouble of curing and smoking duck breast, let alone highlight the waterfowl in its moniker, only to feature it on one menu item? These were just a couple questions that popped up over the course of several visits to the new Maplewood outpost of The Blue Duck.

Celebrated for its comfort food, peaceful riverfront view and day-trip distance, many St. Louisans know the original Washington, Missouri location as a good spot to grab a sandwich when exploring surrounding wine country or the historic downtown. (It is the Corn Cob Pipe Capitol of the World, after all.) Several popular menu items made the trip to Maplewood, but like the banana nut-coffee stout you brought back from that little brewery outside Portland, what seemed like a good idea in one place doesn’t always hold up elsewhere.

I’m talking about that DLT, where the problem wasn’t the quality of duck but using the meat in the first place. Duck can’t be cooked as crispy as bacon, so everything on the sandwich had a similar texture. And unlike pork, curing and smoking masked the duck’s true flavor.

The classic burger proved much more satisfying than the signature sandwich. As expected from any upscale restaurant, the meat (in this case, chuck) was ground in-house, and chargrilling brought out its bold beefiness. The dense half-pounder came fully loaded with crisp romaine lettuce, tomato, red onion, cheddar, house thick-cut smoked bacon and bread-and-butter pickles rather than dill, adding a pleasant sweetness. Bonus points for a potato bun strong enough to contain it all while still yielding softness.

Where the original Blue Duck conveys cozy relaxation with picture windows framing the Missouri River and woody ambiance, the Maplewood version stands in stark contrast. Located in a renovated, 4,200-square-foot portion of the former Monarch on the corner of Manchester Road and Sutton Boulevard, it’s not exactly harsh, but not particularly inviting, either. Part of the problem is the gymnasium-sized space – brightly painted floating window frames (think Microsoft Windows logo) and a smattering of plant boxes look lost on the massive walls. Quaint touches like fresh flowers and mismatched salt-and-pepper shakers evoke a down-home motif that seems incongruent with the generic contemporary-industrial design. One diner remarked that the decor felt like a Pinterest “decorate on a dollar” collection.


What The Blue Duck lacks in ambiance is made up for on the plate – so much so that it feels like overcompensation. There’s no question that executive chef Jordan Knight and his crew can cook. They use top-quality meats and produce, and nearly everything is made in house. But like the decor, the word that came up over several meals was “incongruent.”

I’m still trying to figure out the thinking behind my pork dinner-breakfast mashup, consisting of a grilled, thick and juicy bone-in chop accentuated by a bourbon-mustard seed glaze, real baby carrots (not baby-cut), fried and smoked whole new potatoes (which seemed merely roasted) and an apple butter biscuit. Why add a separate plate of ham and shirred eggs to an otherwise fine dish? Did dinner really need help from breakfast?

Seared trout with fried Brussels sprouts was another example of genre-bending eclecticism. Two fresh, beautifully seared large fillets arrived swimming in a pool of butternut squash puree ringed with pastrami-spiced dashi. What again sounded well-conceived went sideways when the competing flavors of the sweet puree and warm-spiced broth overpowered the natural lightness of the fish. The dish was then pushed over the precipice of logic by the large trout rillette crostini crowning the plate.

The hanger steak and the scallops with bacon – both high-quality – suffered equally from an overabundance of overabundance. From the specks of cured egg yolk, fried pickled red onions and cauliflower cream in the steak dish to the jalapeno gremolata, Worcestershire-horseradish vinaigrette and ½-inch-thick bacon slices with the scallops, many ingredients either got in the way or added more to the description on the menu than taste on the plate.

The two crowd-pleasers, smoked fried hot chicken and the seasonal veggie entree, received high marks for not going overboard. Unlike the blistering Nashville version, The Blue Duck’s hot chicken had gentle heat from crunchy crushed Old Vienna Red Hot Riplets breading. Two boneless breasts on a slice of white bread alongside fried smoked potatoes, pickles and a pepper gravy were as down-home as Sunday supper, even though mine lacked the chowchow that was supposed to be part of the meal. The trove of deeply caramelized, raw and pickled vegetables making up the seasonal entree, including beets, greens and what appeared to be turnips and carrots, proved to be the most pleasant surprise with smatterings of orange zest and dollops of creme fraiche adding brightness and pungency.

Desserts like a smoked apple crumble cake and a German chocolate pie-of-the-day reflected the restaurant’s emphasis on heartiness over daintiness. Both the cake and pie were balanced and not overly sweet, but any smokiness was subtle to the point of nonexistence in the apples and the pie’s thick crust lacked desirable flakiness.

Replicating the success of a popular restaurant in a quaint river town is risky business. Where the Washington restaurant keeps things relatively straightforward – no shirred eggs and ham on its pork platter; a BLT to complement the DLT – the Maplewood version feels like it’s trying too hard. Like a talented country kid trying to fit in, all The Blue Duck has to do to be great is be itself.

AT A GLANCE
The Blue Duck