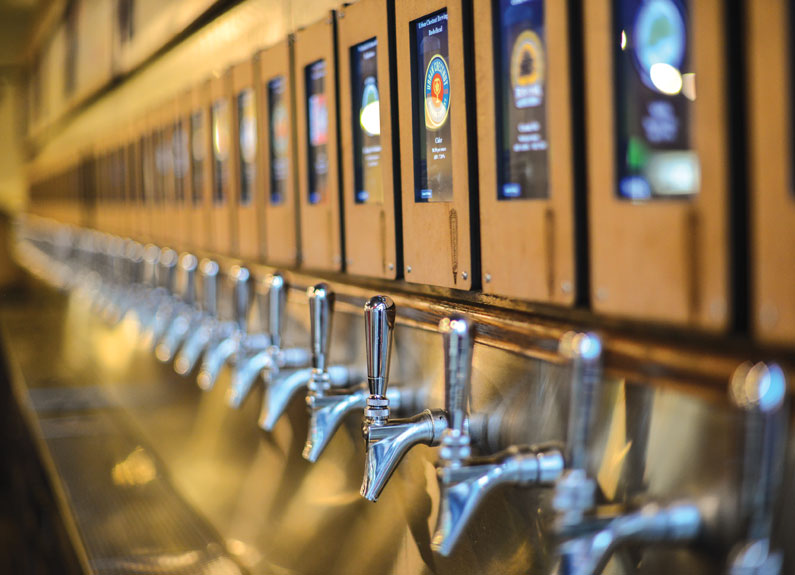 At the newly opened Tapped in Maplewood, there’s no need to fear diving into that tempting blueberry maple Imperial stout that would normally pose too big a risk. You need only hold your credit card-linked electronic bracelet to the stout’s marquee plaque, pull the tap of the self-serve system and a splash of suds is yours to test for just a few cents per ounce. Each tap features a touchscreen that describes the beer, but the beauty of this bar is in ignoring all that and just trying them all. The future is now.

I will probably always feel like a dork swiping an electronic bracelet and cranking out beer from behind an iPad, but the iPourIt system is flawless; I never saw it fail or bug out on any of my visits. My tabs were always accurate, and the beer selection has been steadily improving since Tapped opened in May, incorporating more interesting and varied local brews.

On my visits, all the drinks were sorted on the chalkboard by type. With no fixed sizes, I was able to enjoy favorites like Ferguson Brewing Co., Modern Brewery and 4 Hands Brewing Co., and still try some new breweries. There were also eight wine taps available for the beer-averse (definitely not a problem I have) with a good mix of reds and whites.

Tapped is the place to go with a mixed group of all kinds of drinkers. It’s easy, with endless options for finicky friends, where patrons can drink as much or as little as they’d like without drawing attention to either. Even the glassware gives you choices with pints, Pilsner glasses, tasters and stemware, and I got pretty into the glass rinsers built into the drip tray. It’s ideal for combining the initiated and unadventerous, but the vibe isn’t what you’d expect from a beer spot. A perplexing mix of restaurant and bar, you have to be seated at a table, which brings the focus off the beer and toward your group.

This place isn’t for minglers. It doesn’t have that lively, clinking-bottles background noise of a traditional bar experience. You can sit at a “bar” facing the taps, which is cute, but that just means you stare at people’s backs while they swipe through beer descriptions.

Food is ordered at the wood-fired oven station: tap (of course) your bracelet on the ordering pad, and an employee punches up your munchies. Pizza is the thing worth ordering. Baked in the aforementioned wood-fired oven, it’s a little more casual style with thicker crust than Neapolitan. Pies are cooked exactly right to come out melty and crisp. Go for the Tapped Deluxe (why choose?) or the beautiful combination of pepperoni and artichoke.

The robots are coming for all our jobs, but Tapped shouldn’t worry any bartenders. While it was a treat to be able to go back easily for just one more swig to see if I really liked that Earthbound ESB as much I thought (I did), nothing can replace good service. Without that personal connection, interaction with the staff was a little weird. When I was there, the crew started putting chairs up on tables an hour before close. I’m not one to keep servers past last call, but there wasn’t even a call. This happened on more than one visit, and was much more uncomfortable than the giant robot keg. At the end of the night, I missed having a bartender friend to wave to on the way out.

However, if you don’t care about the traditional bar experience and just want a family-friendly spot to try a lot of different beers, Tapped has you covered.