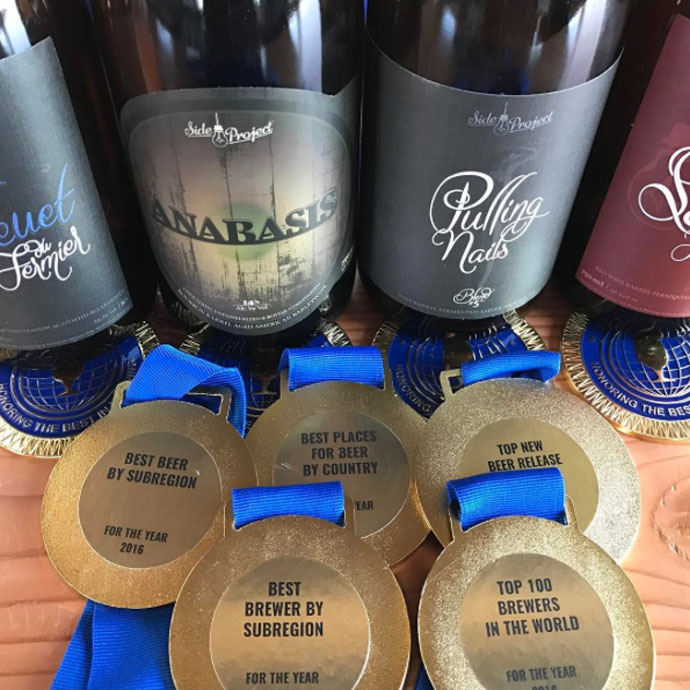 side project bottles and awards from ratebeer

Once again, St. Louis-area breweries, taprooms, bars and retailers were well represented at the annual RateBeer Best Awards. Side Project Brewing, Perennial Artisan Ales and Saint Louis Brewery were all named among the Top 100 Best Brewers in the world.

This is the third time both Side Project and Perennial have made the Top 100 list. “In the U.S. there are more than 4,000 breweries, and this is worldwide,” said Perennial co-owner Phil Wymore. “This is pretty exclusive company and we're honored to be a part of it."

The RateBeer awards are based on user reviews of beer and breweries around the world.

“It’s always an honor,” said brewer and co-owner Cory King. “We try really hard to make great beer, and it’s good to know that as small as we are, we can still make waves.”

This is the first year the Saint Louis Brewery, which brews Schlafly Beer, has made the list. “We’re absolutely flattered and grateful to all those who made it happen,” said Schlafly founding brewer Stephen Hale. “It’s a really special thing to get this kind of recognition.”

Side Project took home an armload of awards in the regional and style. In the statewide categories, it took home Top Beer in Missouri for Anabasis, as well as Top Brewery and Best Brewery Tap Room in the state.

Three Side Project beers were named among the Best New Beers out of more than 60,000 worldwide: Pulling Nails No. 4, Bleuet du Fermier and Saison du Fermier from Pinot Noir Puncheons.

“Anytime something like that comes up, it’s surreal,” Hardesty said. “The amount of recognition we’ve received in the community, it kind of blows my mind every day.”

Editor's note: This piece was updated at 4:35 p.m. Feb. 3 to include an additional quote from Phil Wymore.