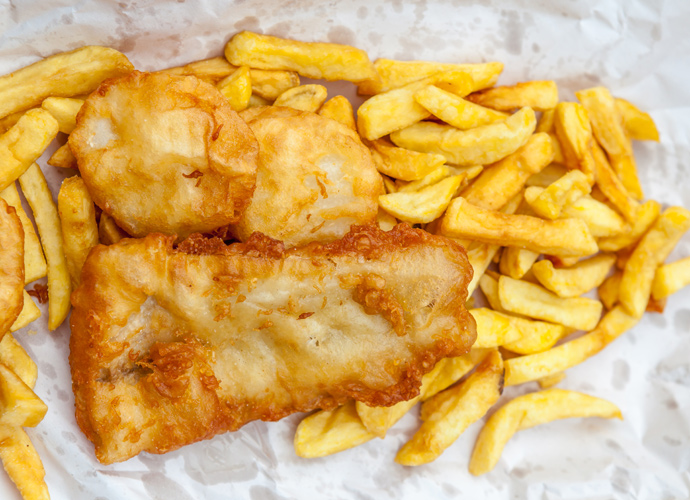 I met Stephen Ibendahl in the basement of St. James The Greater Catholic Church in Dogtown. I wasn’t searching for any religious experience, but rather a plate piled high with golden fried fish. And who better to ask than the man behind Friday Night Fish, a website dedicated to that most popular of St. Louis traditions, the Lenten fish fry.

Each year, Christians abstain from meat on Fridays during Lent, a 40-day period of reflection and sacrifice before Easter. During this time, many churches host a Friday fish fry where those observing Lent or those hankering for a piece of battered cod can get their fill.

We staked out our place in line, which coiled around the perimeter of the basement, and as we inched forward, Ibendahl told me how his quest for the best fish fry in St. Louis began.

A decade or so ago, he lived in the Central West End, and his parish at the time, the Cathedral Basilica of Saint Louis, only hosted one fish fry a year. This forced him to find fries outside the neighborhood. A self-professed “stats geek,” he started keeping track of his favorites for fun, until his wife, Elise Ibendahl, encouraged him to take his hobby online.

Since then, Ibendahl, usually accompanied by his wife, three children and assorted other relatives, has been to more than 60 fish fries, and his website clocks 30,000 to 40,000 views each Lent. For many area aficionados, it’s become the definitive resource for all things fish fry.

“Between the city and the inner-ring suburbs, we’ve probably been to almost all of them,” Ibendahl said. In fact, he’s hit so many that he’s now circling back and revisiting ones he hasn’t been to in years, like St. James, which he reviewed in 2007 and 2013.

Ibendahl’s process is simple, his rules minimal. Fish fries are evaluated on four basic criteria: food, value, atmosphere and way finding/greening (how easy is it to find the dining room and whether recycling efforts are in place), then given a rating of one to four fishes.

Though he has occasionally sampled non-parish fish fries put on by organizations like the Knights of Columbus and the Veterans of Foreign Wars, Ibendahl won’t review restaurants featuring Lenten fish specials – the fries he attends have to be volunteer-run operations. He pointed to St. Pius V Catholic Church on South Grand as a prime example of a fish fry that hits all the marks.

“St. Pius really has all of the elements,” he said. “Great atmosphere, really good food and they use real plates. It’s the quintessential fish fry.”

Ibendahl’s verdict on our St. James’ experience: three out of four fishes – a solid showing. Good fish, decent sides with pasta and desserts as high points, he noted, though signage was definitely lacking. As for me, I was impressed there was a professional card reader available for those without cash.

Ibendahl used to try a new fry every week, but now he’s focused on fish fries closer to home and smaller-scale fries held only once or twice a year. He figures he’s still got at least a few years left on the fish fry circuit. His desired end to this quest: support the local fish fry community … and maybe just a touch of notoriety.

“I’ve always wanted to be in The A-Hed column of The Wall Street Journal,” Ibendahl said. “I always thought it’d be cool to be mentioned on there.”