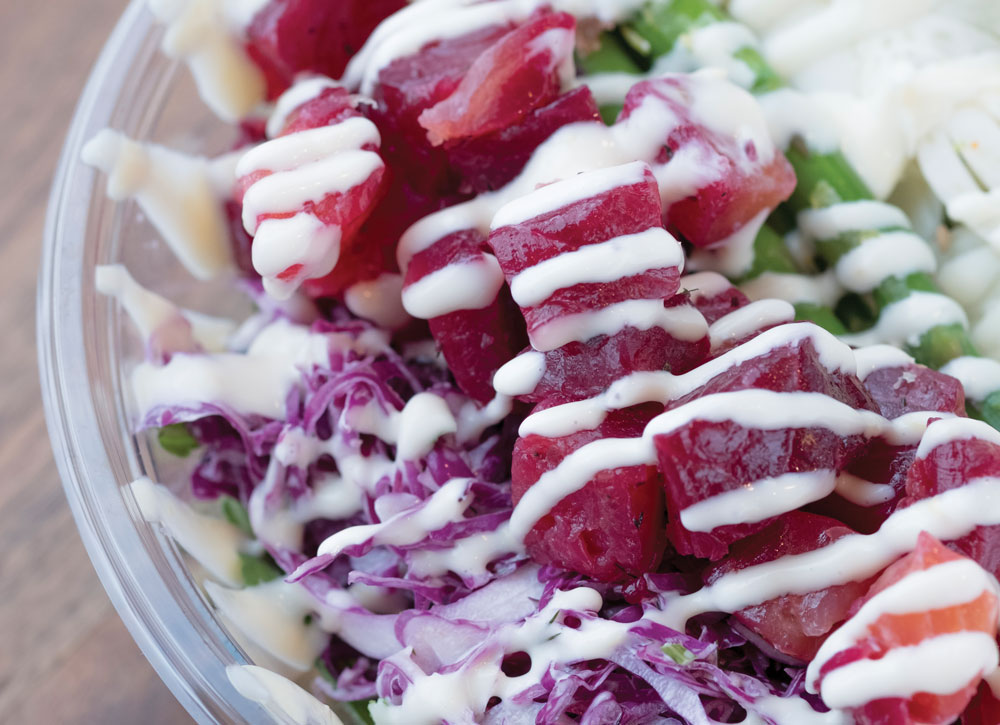 Breaking the rules can be so much fun, and BLK MKT Eats in the Central West End does so with glee. This small, fast-casual restaurant is home to sushi-inspired eats with lavish use of bright, bold flavors and unconventional ingredients.

Menu items are all available as sushi burritos, bowls or salads, and some can be had as nachos. The roll is, as promised, as big as a burrito. Neatly contained by a nori wrap, it’s the ideal choice for meals on the go, but daintier eaters will be grateful for the lighter salad option. The nachos are better in concept than execution, since the delicate wonton chips are no match for the dense toppings. Got it? Let’s talk flavor options.


The OG Fire
If you’re a fan of Americanized rolls like the California and its many complex offspring, you’ll love the OG Fire. It packs a lot of bold flavors into one dish, but maintains a balance. The richness of the avocado and spicy salmon or tuna is offset by crisp cucumbers and crunchy tempura crumbs. Jalapenos and a generous drizzle of house-made OG Fire sauce (a spicy mayo) bring the heat.

Swedish Fish
This dish is as refreshing as a Scandinavian freshwater spring – at least the one in my imagination. I tried this as a salad, and it ended up being my favorite item on the menu. A bed of arugula and yuzu-dill slaw is topped with glistening beet-cured salmon, cucumber, fennel, avocado and asparagus, all drizzled with a house-made Yuzu Gold sauce. Delightfully herbaceous, every bite delivers a whomp of sweet, clean dill and anise-like fennel, and the citrusy yuzu sauce adds some zing.


Shaka Poke
The rich tuna makes this flavor combination downright decadent. Cabbage and cucumber lighten it up, sesame seeds provide pops of nutty flavor, and tempura lends a crunch. A drizzle of sweet, umami unagi sauce ties it together, along with a sprinkle of alaea salt (an unrefined Hawaiian sea salt). I tried the Shaka Poke on top of nachos, but the roll or salad would be a better choice. The tuna paired with the oily wonton chips was excessively rich.

Downside
The space is tiny and seats are hard to come by, so if you’re grabbing lunch during the busiest hours, you may want to take it to go. Even so, you may have to wait in line due to a combination of crowds and prep speed – BLK MKT Eats operates assembly-line style, but it’s not as fast-paced as you’d expect.