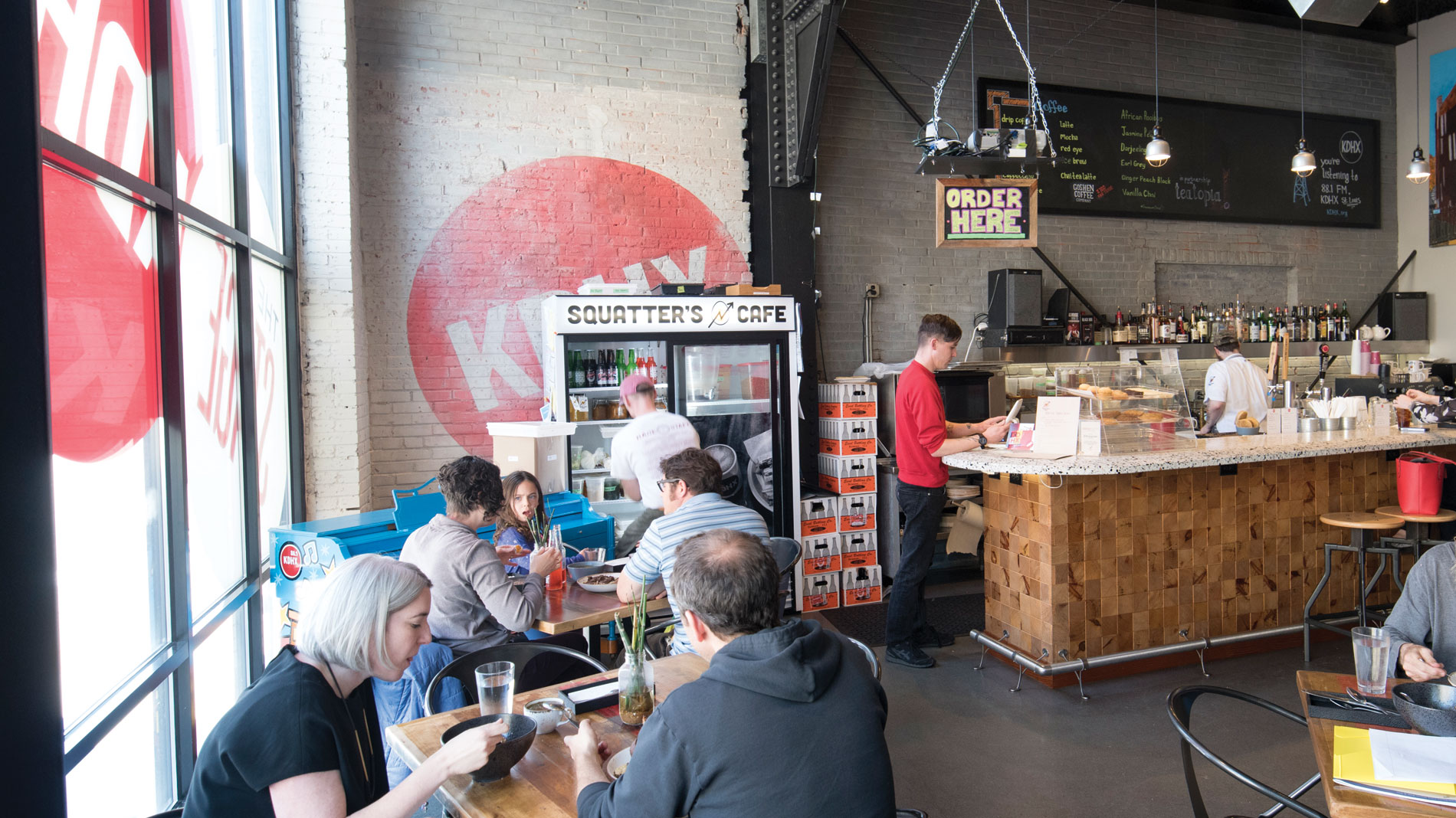 Tucked into the KDHX building in Grand Center, Squatter’s Cafe could easily pass for a little urban coffee shop. But instead of cappuccinos, the compact lunch counter quickly turns out plate after plate masterfully prepared by James Beard-nominated chef-owner Rob Connoley.

With just a couple hot plates and a fridge, Connoley and his sous chef Justin Bell produce a constantly evolving breakfast and lunch menu of indulgently good departures from classic dishes prepared from scratch and locally sourced. This culinary powerhouse proves big flavors come in small packages. Here are some of the standouts.

Vegetable Marrow
As a devout carnivore, it takes a lot for me to recommend a main that doesn’t include meat, but Squatter’s vegetable marrow deserves to be cherished. Scrumptious roasted carrots are cut in half lengthwise, cored and laid on a bed of nutty wheat berries and Squatter’s version of Indian halwa, made with carrots, whey left over from yogurt-making and Indian spices. The carrot innards are also transformed in a savory carrot-white bean hummus that fills some of the hollowed cavities to resemble a plate of bone marrow. Other carrot “bones” are filled with beet-white bean hummus “marrow.”

Grain Bowl
A base of immensely satisfying wheat berries is what ignites this dish. The light, nutty grain retains a unique earthiness while soaking up the flavors of surrounding players – in this case, a handful of soft pickled beets and slender oyster mushrooms that melt into each bite. Hiding under the rest are a house umami spread made from leftover roasted veggie scraps and a layer of black tea panna cotta. Bringing a unique savory depth you may not be able to place, they’re a great example of Connoley’s attention to detail and commitment to eliminating waste.

Topping the whole thing off is a healthy dose of salty, sweet and slightly creamy honey-soy dressing that pulls the ingredients together and permeates the dish. I liked the addition of tender, salty bits of chicken confit, but pork confit is also available for a surcharge (both can be added to any dish). The bowl is satisfying, but won’t leave you overstuffed. If I worked nearby, I’d order it at least once a week.

Brekkie Biscuit
Breakfast for lunch is big here. The Brekkie Biscuits are often unavailable because they sell out so fast. The fluffy, house-made biscuit is slathered in rich country gravy and layered with insanely good, sweet candied bacon and a pair of fresh local eggs. Adding the pork or chicken confit would be overkill for this meaty dish big enough to satisfy even the hungriest of ranch hands.

Hash
It’s easy to understand why the hash is the cafe’s best-selling dish. A bright and fun take, it features a mound of itty bitty cubes of sweet potato cut so uniformly you could imagine it’s someone’s full-time job to dice them. A down-home country feel comes out in local apples and a slightly sweet butterscotch sauce. The sweet elements play well with intensely savory pork confit that’s like the best bacon you’ve ever had. All of this is topped with a bright sunny egg that explodes at the first touch and leaks yolk like a sauce throughout.

The Downside
There are only around seven tables and a handful of bar seats. While coziness is part of Squatter’s allure, it can be an issue at high-traffic times. During weekend brunch hours, the seating area at Squatters expands to the back theater area to encompass more guests than during the week.

Editor's Note: The online version of this review was updated to correct information about brunch seating.