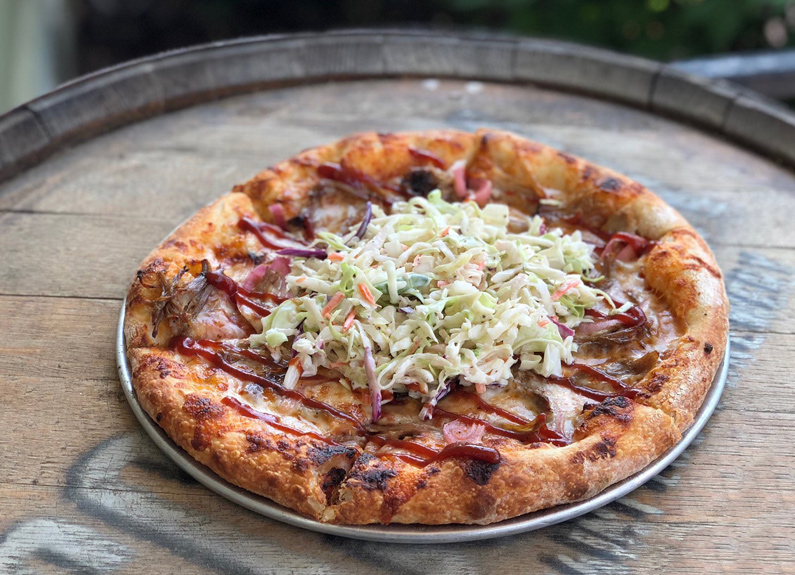 plank road's bbq pizza will be available at 1798 bbq. photo courtesy of 1798 bbq

He’s tackled pizza and dessert. Next in line for Andrew Brewer: barbecue. His newest project, 1798 BBQ, will open at 5210 Highway N in Cottleville next spring.

“Pizza and barbecue is what we did at home when I was growing up,” Brewer said. “We’re still tinkering with the menu, but it’s mostly going to be family recipes, sides I’ve been eating my whole life and rubs that my dad and I have been working on”

Named for the year Cottleville was settled, 1798 will boast a mostly unique menu with some carry over from the Brewer’s Plank Road Pizza and Cottleville Cookies & Cream. One of Plank Road’s pies is “The Oak Street,” which features a pulled pork recipe that will also be used at 1798.

Once renovations are completed, 1798 will seat a similar number to next-door neighbor, Plank Road, along with a shared outdoor patio space, perfect for summer nights, Brewer said.

Amidst other, area barbecue options, it’s Brewer’s confidence in his past ventures and knowledge of his customers that he believes will set 1798 apart.

“It was the charm of the city that grabbed me to do what I’m doing. I live five to 10 miles away. I’ve lived here my entire life. Cottleville just has that cool, homey effect,” Brewer said.

“I have a daughter who is almost 4, so a lot of my decision making comes from that, which is way different than how I would have done it five to 10 years ago. I just want it to be a nice place to hang out with friends and family with good, homemade barbecue.”

Sam Balmer is an editorial intern at Sauce Magazine.