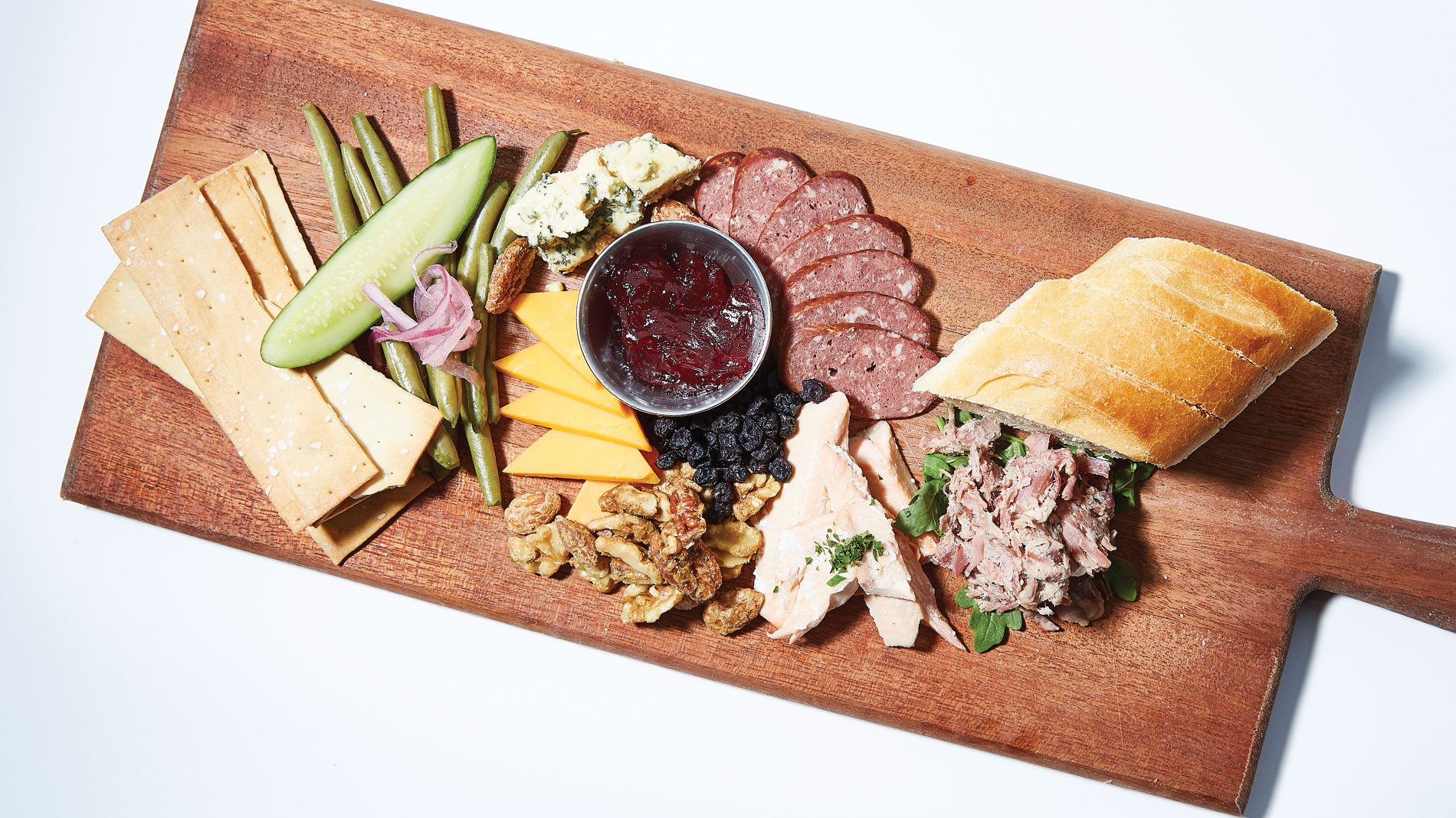 hunter's board at frisco barroom photo by izaiah johnson

Frisco Barroom has been packing in patrons since it opened in Webster Groves eight months ago. It’s just the type of place my father, a former bar-and-grill owner, would have aspired to if upscale, new American gastropubs (or whatever we’re calling them now) were in vogue during his four decades of business. Dad said a good neighborhood tavern selling well-made, affordable food will pack ’em in every time.

From the century-old, two-level building (previously Natural Way Grocer), to the equally sprawling menu and live Americana music on the weekends, nearly everything Frisco offers sets it apart from its competition.

The main level consists of the Barroom and the Dining Hall, named after owners John Barr and Kelley Hall, the husband-and-wife team behind neighboring home and lifestyle store Civil Alchemy and K. Hall Studio, the wildly successful home fragrance company they sold a few years ago.

The second floor has another bar, more dining space and an enviable corner lounge – complete with brick fireplace, mounted game heads and leather seating – that feels like nestling into a mountain cabin to watch the snow fall. Outside, a rooftop deck between taller buildings offers a streetscape view from the front while the back overlooks a stunning patio. 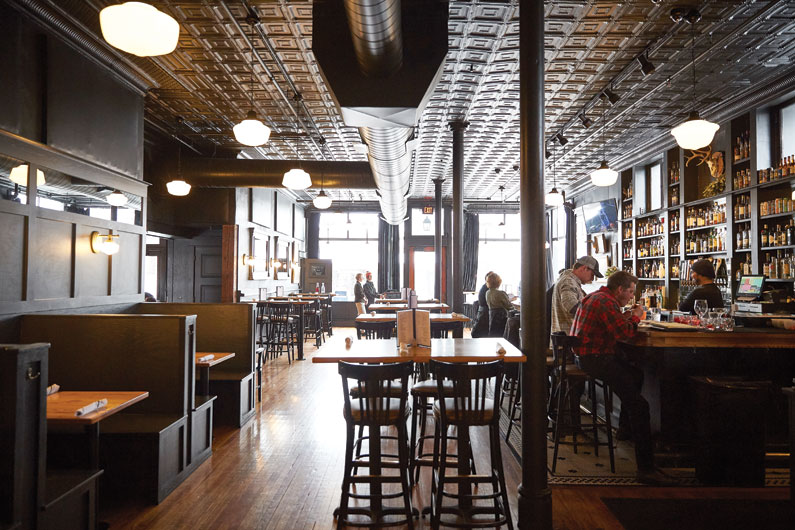 There are burgers and sandwiches on the menu, including a fine Reuben on grilled, house-made rye (all the breads are baked on-premise) piled with house-cured corned beef and nutty Gruyere in place of generic Swiss cheese. But there’s also hearty fare like poutine, pierogies and pasties, all hallmarks from Hall’s native northern Michigan.

Those pierogies, crisped and finished in browned butter, consisted of dough delicate enough not to detract from the velvety-smooth mashed potato and caramelized onion filling (a sweet farmer cheese filling is also available).

Think of the substantial Cornish pasty as Sunday dinner neatly wrapped in a flaky pastry. The savory filling includes ground beef, rutabaga, potato and onion, and you can drench the whole thing with an accompanying rich, thick beef gravy. Also from way up north, the smoked whitefish dip is chock-full of the flaked fish and herbed cream cheese – just right for spreading on house-made flatbread crackers.

That luscious dip showed up on the Fisherman’s Board, one of several boards laden with everything from Italian sausage to mushroom and walnut pate, cheese, pickled vegetables, nuts, breads and dried fruits, perfect for sharing with friends when the evening begins.

Our table chose the Hunter’s Board, a bold assortment of smoked venison sausage, smoked trout and duck rillettes with hints of sage and black pepper, all based around a heady, geranium-infused raspberry jam so irresistible we would have spread it on cardboard.

The French onion soup, however, was more atypical than classic with a lack of savory depth and scarcity of bubbling Gruyere on top. In addition to soups and salads, six entrees round out Frisco’s menu, all straightforward and well-prepared. 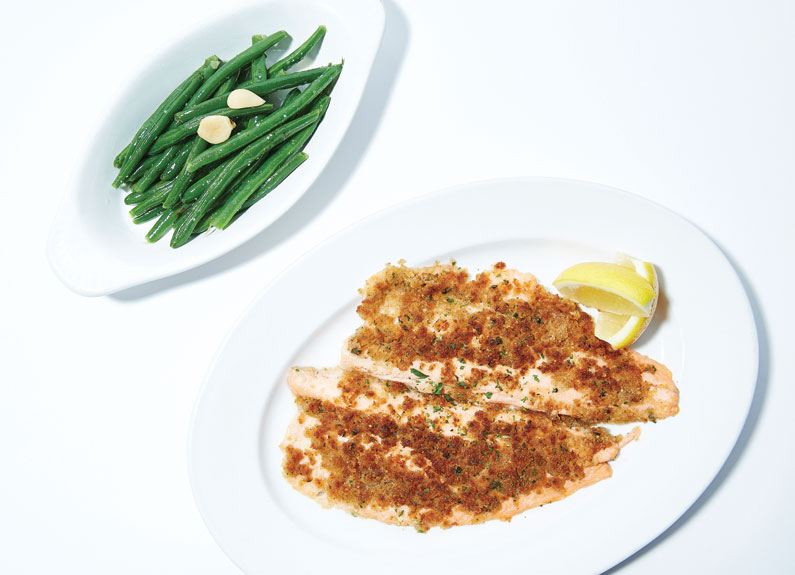 Frisco’s rainbow trout is just as rave-worthy as the horseradish- and pecan-crusted salmon at Frazer’s in Benton Park, which is really saying something. The mild fish – skinned, deboned and gratineed with breadcrumbs, Parmesan, garlic and parsley – arrived from the broiler buttery soft with a bit of crunch. No less impressive: a plate of jumbo tail-on shrimp, marinated in white wine, butter and lemon, then grilled flawlessly.

I love that the kitchen gives simple roast chicken a Peruvian touch with cilantro-lime marinade and traditional green sauce made from cilantro, lime, hot pepper and mayonnaise, but I was hoping for more pronounced flavor from the warm spices and citrusy brightness that make pollo a la brasa so alluring. Somewhere along the way of roasting, grilling and serving, the bird got a tad dry and tepid.

A choice of two sides comes with each entree. I found it odd that they weren’t served on the same plate, making for a lonely looking half-chicken, but the ones I tried were fresh and substantial, including glistening green beans sauteed with pieces of garlic.

The fat and juicy house-made kielbasa with coarse-ground pork is now on the menu full-time due to its popularity as a dinner special. Even though it’s a comforting winter meal, served with mashed potatoes and kapusta (house-made sauerkraut), I’d eat it every season. Like Dad also said, “Always have something that brings ’em back.”

Vibe // Handsomely designed multi-level space combining cozy pub, casual restaurant and live music venue that can get as deafening as a soccer stadium.