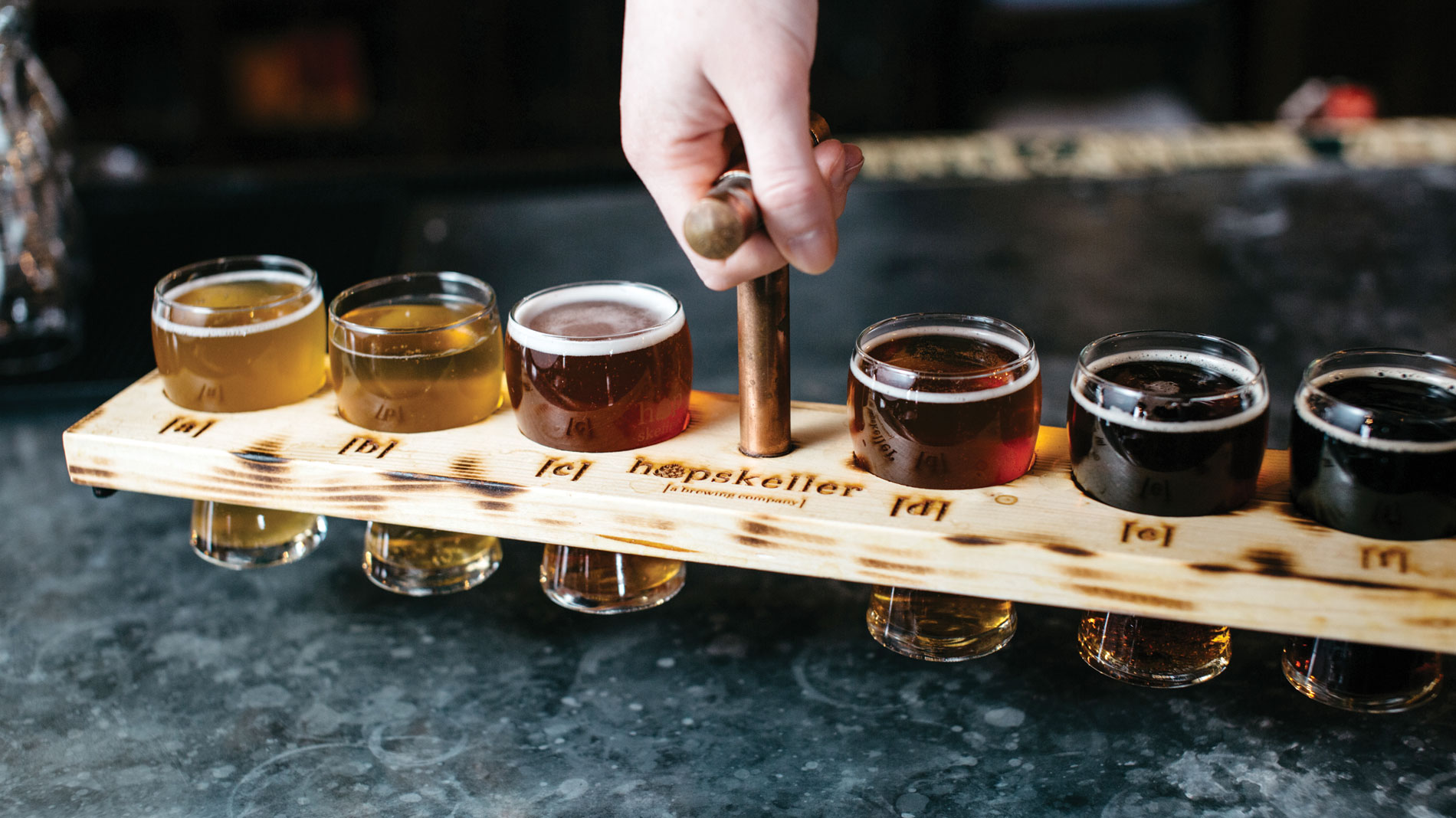 From Belleville to Waterloo, the Illinois brewery scene is booming, and it’s time to explore past the river. Most breweries are 20 to 40 minutes apart, and some are right around the block. Select a few to visit together, or plan a well-organized weekend with a designated driver. Just make sure to refuel with water and cheeseburgers on the pastoral drive between small-town gems.

1. Recess Brewing Co. in Edwardsville
Recess Brewing Co. harkens back to brewpub days of old. A cozy brick building nestled in the heart of downtown Edwardsville offers respite from unpredictable early spring weather. Locals pop in for a pint on their way home from work, bellying up to the small bar for a friendly chat and a few pretzels, bags of Billy Goat Chips or cheese curds.

Snag a seat by the cheery fireplace with a view of the tiny brew works, and order a flight of constantly rotating beers. Darker brews like the low-ABV Pedagogical Porter and the bold Hussies in Space stout should make an appearance on your board (bonus points if you can also try them on nitro), as well as the easy-sipping, 7.4 percent 2211 IPA. – C.K.


2. The Old Bakery Beer Co. in Alton
Eco-conscious beer nerds should flock to Alton, where the former industrial bakery-turned-brewery and restaurant showcases a dedication to sustainability. Old Bakery’s entire portfolio, from its everyday Citrus Wheat to the Gentle Giant Double IPA, is USDA-certified organic, and its food menu boasts a wide variety of vegetarian and vegan fare.

The cavernous brewery is also family-friendly, with plenty of space for kids to explore and play games while the adults settle in with a few pours and a flank steak banh mi or vegetarian Reuben. –C.K.

3. Old Herald Brewing and Distillery in Collinsville
This 2-month-old brewery is the new kid on the Illinois block, but don’t let its age fool you. Brewer Tor O’Brien knows a thing or two about beer. Eight taps pour a color spectrum of styles from a hay-hued, refreshing Miner’s Coalsch to the golden Exclusif, a French/Belgian-style saison. Printer’s Ink, a black ale doing its best impression of a bold stout, is dark and rich enough to serve as its namesake, but that’d be a waste of great beer.

A menu of indulgent comfort food pairs perfectly with your beer pick; don’t sleep on the mammoth, spent grain-breaded jalapeno poppers or the house-made corndog nuggets with an addictive IPA mustard. – C.K.


4. 4204 Main Street Brewing Co. in Belleville
Whether you’re looking for a relatively inexpensive steak dinner or a basket of fried pickles while you watch the St. Louis Blues game at the bar, 4204 Main Street Brewing Co. has you covered. We can’t wait for warm weather so we can experience 4204’s real gem: the expansive biergarten with more fire pits than a campground, cornhole, giant Jenga and hammocks slung between trees.

The beer list also ranges from light, crisp lagers and blonde ales to rich stouts. Explore with a four-beer flight and make sure one pour is 4204’s Chocolate Coconut Stout, with notes of baking chocolate and a lingering but not overpowering coconut finish, or the roasty porter on nitro. – C.K.

5. Hopskeller Brewing Co. in Waterloo
Hopskeller is the kind of brewery you wish was a block or two away from your home. For a lucky few in Waterloo, Illinois, it is – but it almost wasn’t when the brewery suffered a major fire a month after opening in 2016. About a year later, Hopskeller reopened and joined its neighbor Stubborn German Brewing Co. in making Waterloo a required stop on this list.

The bar-style kitchen with a separate ordering register is deceptively small, but turns out exceedingly tasty pizzas, pretzels and more. The beer spans a wide range, from the light, High Life-esque Clair de Lune to the bold Across the Pond IPA. The fact that there’s something here for everyone rounds out the communal vibe of this rustic-feeling, two-story brewery. – A.R.

The Fade to Black oatmeal stout, with its toasty, chocolatey notes and dry finish, makes for a comforting pint as winter slowly gives way to spring. Food isn’t available, but folks are encouraged to bring in their own eats. – M.S.

7. Lieferbrau Brewery in Red Bud
German-style beers are the name of the game at this brewery and tasting room. Located in a historical building circa 1888 in downtown Red Bud, this operation has 12 brews on tap, along with a lengthy whiskey list, cocktails and a few wines.

There’s no kitchen, but guests are welcome to bring their own food, and on most Wednesdays, The Burnt End barbecue joint across the street hauls over specialty wings for purchase. It’s quite convenient as barbecue is a solid pairing for sippers like Lieferbrau’s crisp and smooth Double Crop cream ale. – M.S.

From the tasting room, you can see towering racks of barrels on one side of the cavernous space. Taps rotate frequently, but you can usually try a signature farmhouse-style beer on draft. The bold, barrel-aged stouts also are worth a sip if you’re lucky enough to find one. Other tasty offerings are the Citra pale ale or variation of Bellman, a porter. They’re just as worthy as their boozier counterparts. – C.K.

9. St. Nicholas Brewing Co. in Du Quoin
Located just off Du Quoin’s picturesque Main Street in a reclaimed historical building, St. Nicholas Brewing Co. is a true neighborhood joint. The brewery has a bicycle theme, belied by details like the sprocket that forms the brewery logo to the bikes of various types hanging from the ceiling to the bicycling-inspired names of some of the beers, like the bright and fruity Peloton Pale Ale. The kitchen puts out a hearty pub menu with favorites like loaded fries, burgers, pizza and sandwiches, perfect for soaking up all that beer. – M.S.


10. Scratch Brewing Co. in Ava
Scratch Brewing Co. is not on the way to anything. In fact, it’s incredibly out of the way, but the red-roofed barn tucked in the woods on the edge of a southwest Illinois cornfield is absolutely worth the trip. The farmhouse-style beers are made only with what brewer-owners Marika Josephson and Aaron Kleidon source locally, forage or grow on-site. You’ll find brews made with cherry bark, paw paws, wild grapevines, clover and hickory leaves, each more surprising and delightful than the last.

The same attention to local detail is paid to the food. A roaring, wood-fired oven turns out 12-inch pizzas topped with cheese and meats from neighboring farmers. There’s no telling what you’ll find on any given weekend at Scratch, but one thing is certain – you won’t find it anywhere else. – C.K.

11. Big Muddy Brewing in Murphysboro
If it weren’t for the logo-ed fermenter out front, Big Muddy Brewing would look like the other industrial buildings along North Seventh Street. The interior is similarly austere – just a bar, some picnic tables, a row of shiny tanks and a corner for swag sales. Food is limited to beer nuts, chips and a popcorn machine.

The focus at Big Muddy is squarely on the beer, with unique brews like Hempy Galaxy, an IPA that’s dry “hemped” with Hawaiian Haze CBD, and PBC, a milk stout with subtle peanut butter and bitter chocolate notes. – M.S.