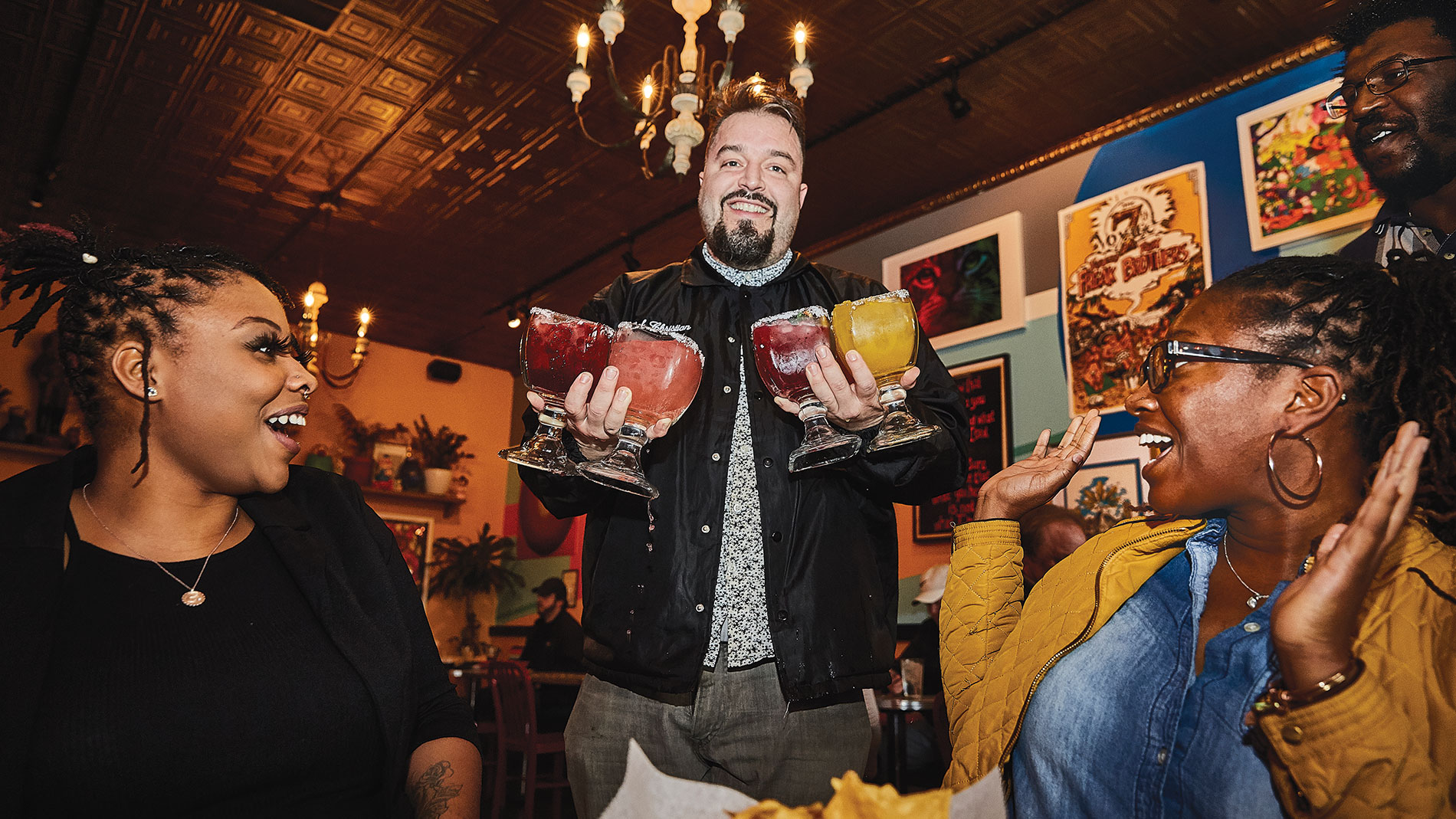 Go all in on a night out in these 8 St. Louis neighborhoods

A big evening out should be as diverse and easy as possible, with plenty of opportunities for scene changes and spontaneous quests. If I’m going all-in on a night out, I want to get a snack and a drink at one place, go somewhere else for dinner, and then end up drinking – and let’s be real, probably snacking again – at another spot.

Sometimes nights should be meticulously planned, especially when reservations are involved, but other times, you can leave plenty of latitude for changing it up. Here are a few paths, from the laid-back to the ambitious and chic, for you to follow when the sun goes down.

The Loop is the perfect neighborhood for a low-key night, especially if it’s a first date. Split a cheap pitcher of beer and an order of fried pickles at Blueberry Hill to break the ice, then throw back some ramen at Nudo House. You’re ending your night on the Eclipse rooftop bar at the Moonrise Hotel, so dress appropriately and be prepared to kick back with a tasty drink and a wonderful view.

If you’re a South City ride-or-die, you’ve probably done some variation on this stream of mellow, accessible standards. Start by enjoying a classic cocktail (I recommend the Really Rye Old Fashioned) or a local beer next to the fire pit at The Royale. Then, head over to Taco Circus for mezcal, chips and salsa, street corn and a few tacos. Finally, post up at Tick Tock Tavern. Audible: If it’s chilly, switch Tick Tock and The Royale to cozy up near the fire for a nightcap.

If you’re going for pure romance, look no further than Wydown Boulevard, where you’ll find Bar Les Frères, Billie-Jean and I Fratellini. French-, Asian- and Italian-inspired respectively, what threads these restaurants together is owner Zoë Robinson’s impeccable taste.

This is a marathon, not a sprint, so start light with Champagne, Gruyere souffle and potato blinis with creme fraiche and caviar at Bar Les Frères. Then head across the street to the handsome Billie-Jean for an inventive soju cocktail and a few powerful entrees and small plates, like the sesame lacquered Japanese eggplant with crispy tofu and the whole red snapper with yellow curry. End up at I Fratellini for an amaro and some luscious tiramisu. Who could ask for anything more?

Looking for an elegant but not over-the-top evening? You’re going to Maplewood! Start at the charming Side Project Cellar with a saison or wild ale from the internationally renowned brewery. For dinner, escape to Morocco by walking two blocks to The Benevolent King. Order the maqbouba (charred tomatoes with vinegar), baba ghanoush, split pea falafel, lamb meatballs and the cookie plate for dessert.

Then, the night can end one of two ways. If it’s still early and you’re looking to impress, catch a glass of wine at Chateau Maplewood. If dive bars are more your speed, settle in a couple doors down at The Crow’s Nest for heavy metal music, an ’80s movie on the projection screen and some brews off the strong-but-unpretentious beer list.

You want to make a great first (or tenth) impression, so you’re meeting up at Planter’s House for dill fries and a Paper Plane cocktail or Planter’s House Punch. Then, you’re headed down to Cherokee Street to hit Taqueria El Bronco for chips, salsa and some amazing tacos (this one-dollar sign dinner will offset the pricier cocktails you just had). After that, it’s the bright, boisterous B-Side or the moodier Fortune Teller Bar till close. Whether you’re rolling with Uber or driving yourself, these spots will give a huge variety of strong vibes within a relatively small grid. Slam dunk.

This tried-and-true journey is perfect as a date or a squad turn-up session. Begin on the fringe of The Grove at Rockwell Beer Co. for some crisp, flavorful beers and a crazily good cheeseburger. Travel a couple blocks to Parlor, where you can play pool, video games and skee ball. Do a shot. Actually, do two, and then play “NBA Jam.”

Now you’re ready to dance, so Handlebar is your move. (Yes, you’re still allowed to go to Handlebar past your 20s.) After hours of partying, you’ve probably worked up an appetite again, so you’re going to want to hit Grace Chicken + Fish for chicken strips or fried tofu before heading home.

Looking for a quiet evening out west? Begin at Marcella’s Mia Sorella, an inviting spot where you can have an equally good time losing yourself in the happy hour crowd or chilling at a table with a glass of wine and a bar snack. For dinner, head to Napoli 2, a small oasis of charm and comfort on an increasingly commercialized block. Have another glass of wine and some masterfully fried arancini, choose from a number of attractive salads and split a couple house-made pastas. For dessert, walk down to Katie’s Pizza & Pasta Osteria for ricotta doughnuts and a glass of port or an amaro. Buona notte!

Maybe this is for an anniversary, maybe it’s a Valentine’s date or maybe you just want to live it up with someone special. Whatever the reason, start your night at Taste with some Brussels sprouts, fries and a classic cocktail. Bottoms up, then head to your reservation for a beautiful chef’s tasting at Vicia. Split a bottle or two of natural wine.

After that, go home, get under your warmest blanket and put on an old movie or whatever TV show you’re currently obsessed with. Good thing you had the foresight to hide a pint of vegan coconut chocolate fudge ice cream from Clementine’s in your freezer.