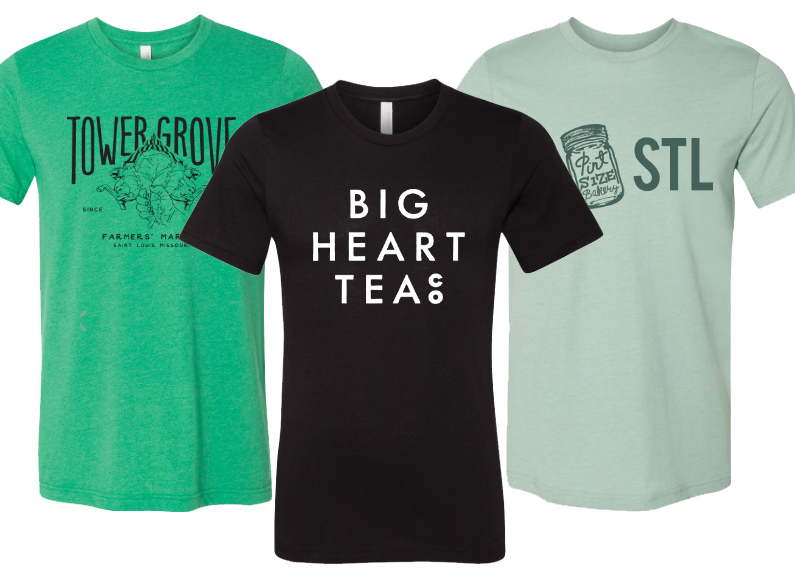 Local print shop Tiny Little Monster found a way to stay afloat while also supporting other small businesses during the COVID-19 pandemic. Through the Here For Good fundraiser, the T-shirt shop is selling shirts featuring designs of over 175 St. Louis-area businesses and donating $10 of each sale to the business.

Travis Wisely, social media and marketing manager at Tiny Little Monster, said that as his team was scrambling to keep their doors open they spoke with friends who owned other businesses and put their heads together.

“We reached out to a bunch of local businesses, and the first five were all on board,” Wisely said of the campaign that launched March 19. “It just really took off organically as friends on social media shared it.”

Tiny Little Monster invited all St. Louis small businesses to participate in the Here For Good fundraiser. Once they send in a design, the shirt will be featured on the fundraiser page and available for purchase for $20. The fundraiser has sold over 3,200 shirts and raised about $32,600 as of Tuesday, April 7.

The original plan was to print and sell shirts as orders came in, but three days after they opened the online store, Mayor Lyda Krewson announced the 30-day stay-at-home order. As Tiny Little Monster is a nonessential business, they had to halt production. For now, the shirts are available for pre-order.

“We’ve been [working] with the St. Louis government,” Wisely said. “Starting Wednesday, they’re going to allow us to have one printer per 100 square feet, so basically we’ll have one printer in there at a time. As soon as we come back, we’ll hit the ground running.”

The local businesses involved range from restaurants and bars like Cafe Osage, Schlafly Beer and Steve’s Hot Dogs, to other businesses like salons, fitness studios and bookstores. Each week, Tiny Little Monster sends a check to the business for the amount of money they raised.

“In St. Louis, there’s a huge range of small businesses. St. Louis is so cool about supporting indie businesses and indie artists,” Wisely said. “In a couple of weeks, we plan to do a push for the smaller businesses to get their shirts bought. In the end, we want to sell at least 25 shirts for each business.”

In addition to the customized T-shirts for each business, there is also Here For Good Support All shirt. The proceeds from this shirt, which features the logo for the fundraiser, will be split among all the businesses involved.

St. Peters-based screen-printing company Shirt Kong has also gotten in on the action.

“We asked them if they wanted to participate, so they made their own store on their website and are doing the same thing for businesses out in their area,” he said.

Are you a small business that would like to be part of the Here For Good fundraiser? Click here. To purchase a T-shirt, visit tinylittlemonster.com.

Lefty’s Bagels​ is slated to open sometime in April in the Baker’s Hub​ at 67 Forum ...

On Sunday, April 5, Twisted Roots Brewing​ notified their customers on Facebook​ of a fire in ...

Pipers Tea & Coffee will open on South Kingshighway in St. Louis this summer

Pipers Tea & Coffee​ is set to open its first St. Louis location this summer at ...