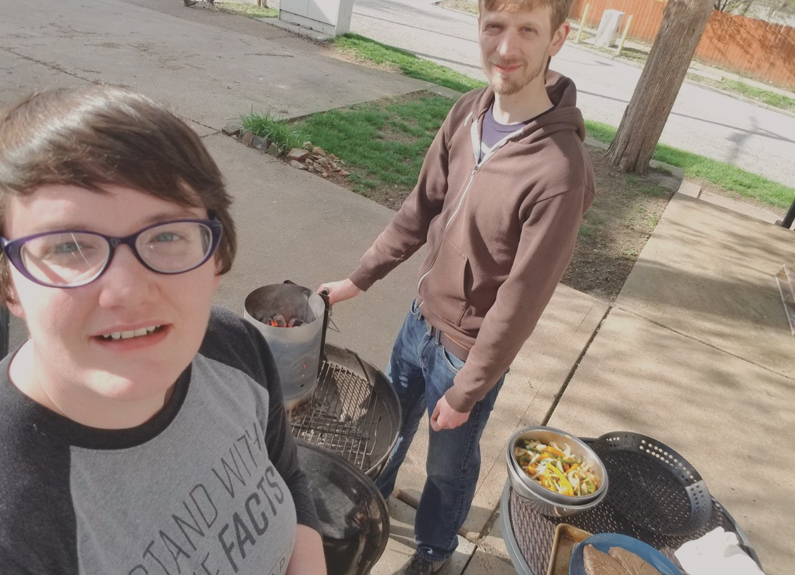 Anne Fosterling joined Maplewood restaurant The Benevolent King as chef de cuisine shortly after it opened in 2018, taking over the nightly reins from chef and restaurateur Ben Poremba. Since then, she’s worked to develop a menu of Moroccan and Mediterranean flavors that elegantly take form in dishes like lamb neck tagine, Briouat (a crispy Moroccan dish with turmeric, cinnamon and honey) and charred carrots with urfa pepper and harissa yogurt. Even after the restaurant closed, Fosterling continued working, preparing dishes to sell out of Poremba’s Botanical Heights grocery store, AO&Co. But once they reached the end of their products, working to creatively combine what was left, they decided to wrap up the project. “At one point, I made what I refer to as ‘walk-in soup,’ which was just everything,” she explained. Now, she’s turned her attention to home cooking, as well as restoration projects both at home and at the restaurant. We found out what she’s been grilling, what aspects of her routine have been tough to shed, and what she thinks the post-quarantine dining landscape might look like.

What did the end of work look like for you?
We collectively had a meeting Monday [March] 16 and closed all the restaurants. We spent a couple days bringing all the product from the King over to Olio, and then for two weeks or so, we were just trying to break down everything. Anything that’s salable or can be frozen. Then, we were doing order-only food, and then we stopped completely. That last day, we just gave away all the food to our employees and the employees of Union Loafers and Indo, since they’re right there.

Are you and your husband, Arthur, staying at home now?
Yes and no. Arthur’s officially unemployed, but I am still employed. I don’t have to do anything, because there’s nothing to do, but I have been going into the King to, like, deep clean the walk-in, because it’s completely empty for once. I’ve been painting, doing touch-ups on the walls. Just stuff that I’ve always wanted to do, maintenance to the restaurant. I’m going to take a solid inventory of what frozen stuff and canned goods we have soon and start working on what I presume will be a summer menu. But I don’t really know.

What was Arthur doing before the stay-at-home order?
He was working in the bread program at Olio. He hasn’t been there terribly long. He’s a baker there, he helps with the bread, and he does the desserts for Elaia.

What have you been cooking lately?
We did hamburgers the other day. I think it might have been the first time I’ve grilled hamburgers. Almost all of our grilling is either a weird dish that we specifically want to try, like a whole fish, or it’s grilling vegetables for multiple dishes throughout the week. We were thinking about doing pizza on the grill. We’re going to make tlayudas, which is like a giant quesadilla with a bunch of stuff, because Arthur found these 12-inch commercial-size [tortillas] at the store.

You mentioned your summer menu. Anything you’re looking forward to developing, or are you just waiting it out?
I guess I’ve just been thinking about scaling what we already had back by a bit. By a lot. I’m going to try to really price-point it out and make it as cheap as possible, while still doing the things that people like the most. That’s a tough question. I’m worried – we’re making very little income. I can only imagine most other people are making very little income. I guess those people who have office jobs that can work from home will go back out to eat, but I don’t foresee people in the industry going out to eat immediately. I know we all want to, and we’re trying to be supportive, but I just don’t see a mass influx of people going out to eat right after we’re allowed to go back to working.

Have you been watching anything good?
We’ve been watching a lot of dumb movies. A lot of feel-good or nostalgic movies, like The Lord of the Rings and Jurassic Park. I was kind of thinking about it today: I’m basically just watching all the movies I’d watch if I was home sick. We started randomly rewatching Game of Thrones. I don’t know what we’re doing. We’re not really TV watchers, so it’s like, we have all this time after dinner, since we’re eating at a normal time now instead of 11 at night. So we’ll watch TV. Sometimes we’ll listen to records and just sit there.

I don’t know what it is, but I never watch TV during the day.
Yeah, TV is not a daytime thing. I keep finding myself making food and then eating it in the kitchen, while I’m listening to NPR, which is what I’d be doing if I was getting ready to leave for work. But I’m just doing it longer [laughs]. I’m still standing there. I guess one of the big things we did is that we dug a giant hole in our backyard and made a patio. It’s pretty nice. Mostly it’s so when I do episodes of “Grilling with Anne” on Instagram, I can have more space. Right now, we have to do it in the walkway.

What have you been listening to and reading?
I did get the new Bill Callahan record. I’ve been listening to that a lot. It’s so good. I’m a weirdo when it comes to music. I can go the entire day sitting in the house in complete silence and not even notice. Half the time, I don’t even notice when Arthur has been playing something in the car. It’ll be like five songs in and I’m just like, “Hey, is this Pavement?” I’m not paying attention. I’ve noticed Arthur’s been playing a lot of nostalgia music. I think he was playing Death Cab [for Cutie] yesterday. Just, like, older albums you don’t get to all the time, but now we have time to sift through them again.

I read The Outsiders the other day. I was reading this collection of articles by David Remnick, who’s a journalist, but it was a little too serious. So I’ve just been reading easy books. I was thinking the other day, “I should really pick up a book about baking or something and learn more.” And then I was like, “No, I’m good.” It’s not like having real free time. It’s not like at the end of the day I’m like, “OK, I’m really glad I accomplished this, because tomorrow I don’t have time to do it.” I fucking do have time.