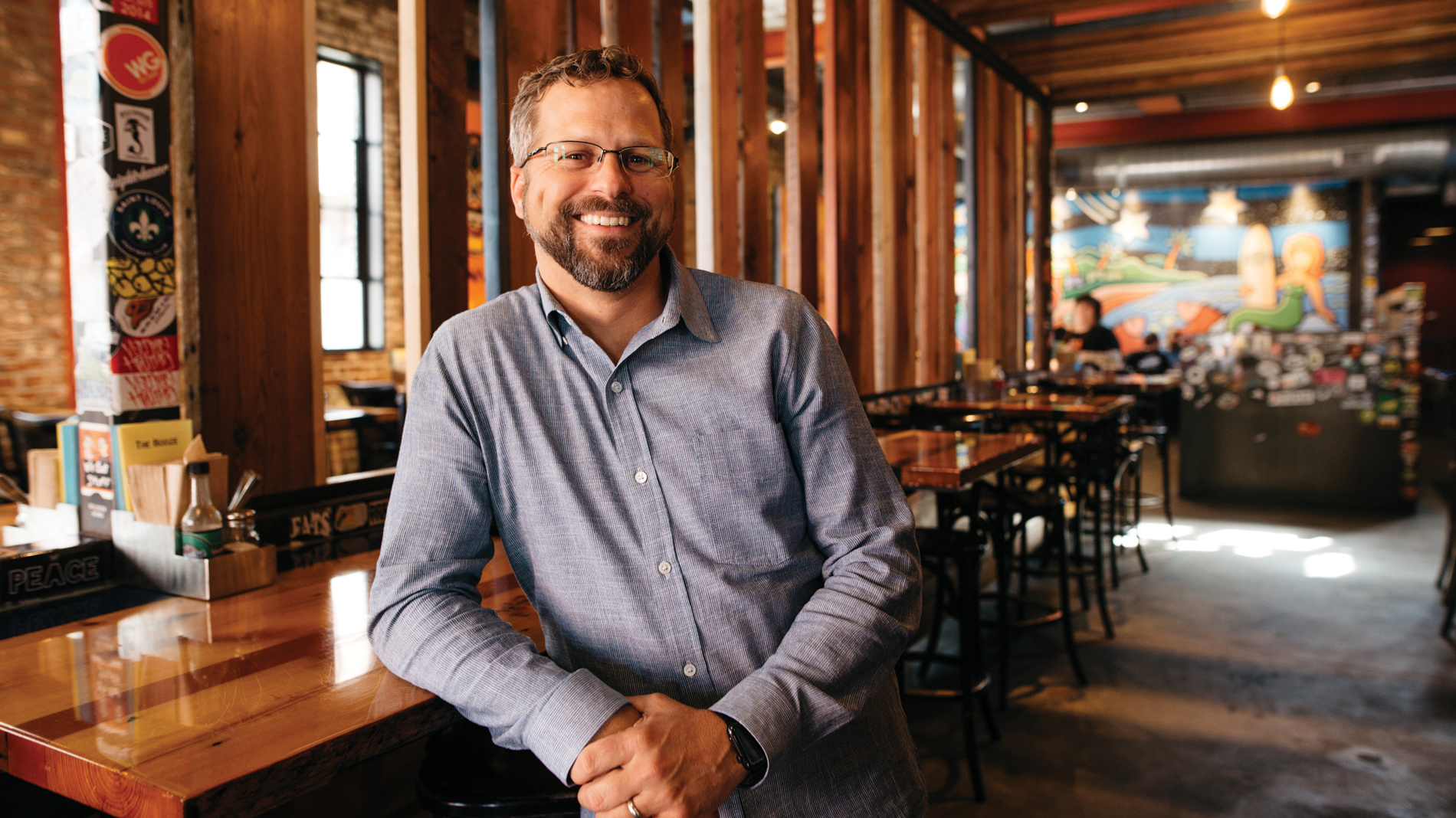 They were good for about two days. That’s how long Mission Taco Joint’s curbside margarita program lasted on its first run. But after a low-key warning from the Missouri Division of Alcohol and Tobacco Control, the restaurant group learned it was actually illegal to be selling pre-made drinks with takeout orders, so they promptly shut down the margarita initiative, which constituted about one-third of their income at that point.

It was a fate that Mission co-owner Adam Tilford refused to accept, especially in light of the numerous alcohol law reforms we’ve already seen from other states during this precarious time. So, after stabilizing a new do-it-yourself margarita program that adhered to Missouri’s strict rules, he started working his way up the chain, trying to figure out a way to keep cocktails in play. He contacted numerous figures in the state administration, networked with other local restaurateurs, even implored Mission Taco Joint’s social media following to call their state representatives. Finally, last week, the state enacted an emergency waiver that would allow drinks to be sold with carryout orders. For a fuller picture, we talked to Tilford about his quest to keep Missouri’s cocktail programs alive during the coronavirus pandemic.

Tell me about the takeout margarita program you started up when the stay-at-home order began.
We closed down [our dining rooms] even before the stay-at-home order. One of the things we do are these family taco kits that are really popular, and then we decided, hey, people need to drink margaritas at home. If we package them and seal them in tamper-proof caps, we’re hopefully pretty close to where we need to be as far as Missouri law. We did that for two days, selling quarts for $20 and half-gallons for $40.

What percentage of your business was coming from the curbside cocktails when you were doing it?
Probably about 30%.

So you lost that percentage of the business’ income when you were told to stop doing the margaritas.
Yeah. Basically, we started on Wednesday and did Wednesday and Thursday sales. Friday morning, we got a call from the city of St. Charles saying they heard we were doing margaritas to-go and that, according to the state, we weren’t allowed to do that. We said, “Thank you very much, we’ll take that up with the state.” And then three minutes later, I got a call from the state [laughs]. We quickly transitioned on that Friday morning to margarita kits. We had to sell a whole bottle of tequila and a half-gallon of mix, and that’s just not cost-effective for people. We can’t sell that for $20 or $40, so we were forced to sell it for a higher amount.

So who exactly informed you that you weren’t able to keep doing the batched margaritas?
I got a call from a local alcohol and tobacco control enforcement agent.

Did they threaten you legally?
No, they were very nice. They were not looking to get us in trouble. They didn’t issue any warning letters. They simply called and said, “Hey, we heard you’re doing this. You’re not supposed to be doing this, and we’re asking you to stop.” At some point, I received an email that came from the state that basically said they weren’t actively enforcing this. They weren’t going out trying to bust people, they weren’t sending out warning letters or anything. Someone called the state on us. That’s what happened. When someone calls to make a complaint, they have to call that place and tell them not to do it. They’re trying to turn a blind eye, I think, but once they get called, they simply can’t.

Weren’t a ton of places selling drinks like that?
You go on Facebook or Twitter, everyone was doing it, right? I mean, you can get to-go cocktails from a lot of places. Everyone’s just trying to survive right now. I figured [when we] got called, let’s make some noise and try to get this changed. Some other states’ governors had already issued waivers on this. Why couldn’t ours?

You were pretty active in protesting this. What did that look like?
After I got a call from the local enforcement agent, I said, “Hey, what are you guys going to do to change this right now? This is a silly thing to be enforcing.” And he’s like, “I can’t do anything. Call my boss.” So I called Christin Templeton, who’s the chief of enforcement for ATC [alcohol and tobacco control] in [Jefferson] City. Again, super friendly, and agreed with me, like, “Hey, I’m not going to tell you to do this. I can’t to tell you to break the law, but we’re not really enforcing this very hard right now.” But I’ve got six stores – I can’t risk my liquor license, right? I was like, “What can we do?” And she said that until the governor issues an order, there’s not much we can do.

On that Friday, we put out a tweet saying that we got shut down for margarita sales, and if you don’t think this is right, here’s the ATC’s number. Man, I think we lit their phones up. They must have had hundreds of calls that day. They got to a point in the afternoon that they weren’t even talking to people – they were just taking down numbers. A lot of people right off the bat made a lot of noise. That sort of started some action going at the state level.

So what did that lead to?
I started tweeting with [St. Louis mayor] Lyda Krewson, the mayor of Kansas City, asking them if they could put pressure on. I hadn’t reached any state representative levels yet. There was someone at [St. Louis county executive] Sam Page’s office that I was talking to that was working on it. I was reaching out to places like Major Brands, really just making any phone calls I could to anyone I knew that could possibly have any power to get this changed.

It kind of went silent after a little bit, but last weekend, I got in touch with Ben Brown, who owns Satchmo’s out in Chesterfield. He had been talking to state reps and had started a change.org petition to get this changed, and had collected I think thousands of signatures. We were both independently making a lot of noise, trying to get people to listen and do something.

Did you find out what the holdup was?
Over the weekend, I got reached out to by Chrissy Sommer, who is the state rep for St. Charles. She emailed me a waiver that was dated like March 26. It was literally this waiver. I read it and I was like, “Holy shit, this is it. This says we can sell cocktails to go. And it’s dated in March.” I emailed her back and asked why we hadn’t heard of this. First thing in the morning on Monday, I called ATC and said, “Hey, I was just emailed this executive order saying we can do this. What is this?” She explained that it almost got through back in March, but got shot down by the secretary of state.

Wow.
I asked her why it got shot down and had been forgotten about. She said it got shot down because executive orders – and I may not say this exactly right – but executive orders are designed to extend deadlines and waive certain things, whereas this order, the secretary of state felt that it was changing the law. And an executive order doesn’t have power to change the law. On Monday, Ben Brown called all the reps he had been talking to and, on Tuesday, we found out that they got it through.

What do you think was the final straw that got this pushed through?
I think it was Ben and I reaching back out to the state reps and saying, “Hey, this actually didn’t go through. It got shot down by the secretary of state.” I don’t know exactly what they did. Ben was very instrumental in this. I can’t take all the credit for this. I know we’re a big place and people are calling me because we made a lot of noise at the beginning, when we got shut down, but he was extremely instrumental.

Where did you start with getting the program running again?
We got started back up [Wednesday, April 15]. Sales were great. We’re doing the $20 quarted margaritas and the $40 half-gallons. We’ll still offer the margarita kit and the non-alcoholic mix – a lot of people have their own tequila at home, but they don’t want to buy store-bought mix. We’re using fresh lime juice and fresh orange juice. Eventually, [beverage director] Kyle [Harlan] will start working some other cocktails as well. You’ll probably see our Paloma, or a version of it. We talked about possibly looking at some of our rum-based drinks. Some of our tiki-style drinks as well.

So you guys are home free at this point. You can do whatever you want.
Until May 15, when the executive order expires. If we’re still doing takeout, I hope that they extend that date. So yes, we’re home free.