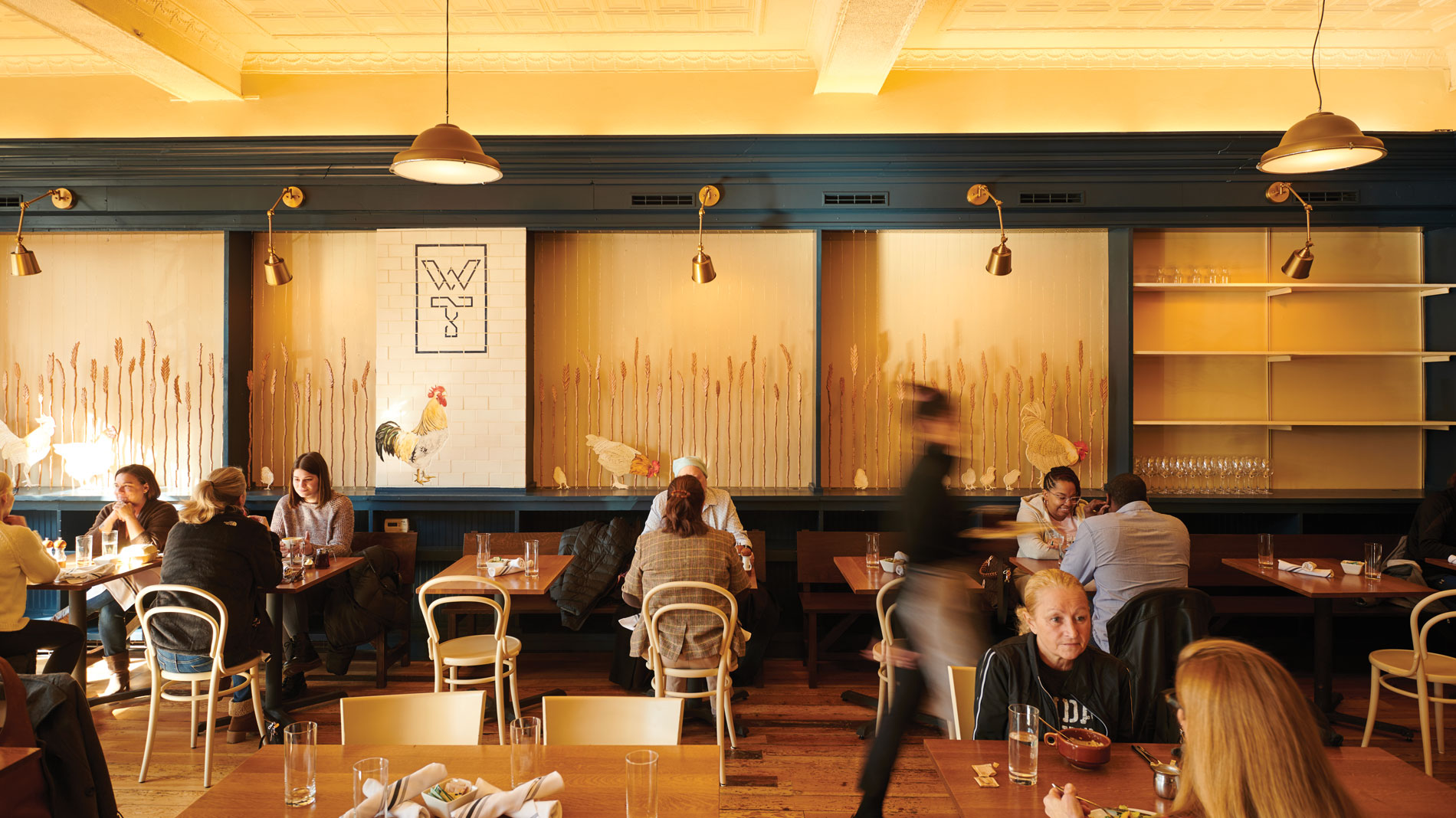 On May 18, Kateri Meyer, owner of Traveling Tea in Maplewood, got an email saying that she was approved to receive funding from the Restaurant Revitalization Fund (RRF). She breathed a sigh of relief, but the money never came.

When the RRF was signed into action as part of the American Rescue Plan Act of 2021 on March 11, many restaurant owners viewed it as a long awaited lifeline. The fund, under the direction of the Small Business Association (SBA), would channel $28.6 billion in aid directly to restaurants, with caps of $10 million per business and $5 million per location. $5 billion dollars of the fund was dedicated specifically to businesses whose 2019 sales totaled less than $500,000. A two-week priority application window was also created for restaurants and bars owned by women, veterans and socially and economically disadvantaged minorities. After a long year of closures, restrictions and reopenings, it seemed that some help was finally on the way.

Now, with the $28.6 billion allocated for restaurant aid completely exhausted and the dust not quite settled, many business owners are left wondering what happened. As of June 30, less than a third of Missouri restaurants that applied had received grants.

That the RRF was exhausted quickly isn’t necessarily surprising. The RESTAURANTS Act, which was proposed in 2020 and acted as inspiration for the fund, had proposed $120 billion compared to the $28.6 billion approved by Congress. “The big issue was that they appropriated $28 billion to an industry that posted revenue losses of $250 billion,” said Bob Bonney, CEO of the Missouri Restaurant Association.

When the Small Business Administration announced the closure of the RRF program on Jul. 2, they disclosed that they had received requests totaling $72.2 billion in funds. Applications surpassed the $28.6 billion allocated by Congress in less than two weeks, per a press release from May 12.

But problems with the fund's rollout haven't been limited to lack of funding.

Meyer heard about the Restaurant Revitalization Fund from her daughter, who owns a cafe in Columbia. She applied as soon as the portal opened, and two weeks later, she received good news: “On May 18, I got an email saying that I'd been awarded,” said Meyer. The email instructed her to look out for payment in the next three to seven business days. “And then a week later, money hadn't come yet, and a week later money [still] hadn't come yet,” Meyer continued.

Finally, over a month later, on June 23, Meyer received a notice that her grant would no longer be paid. Meyer knew it had to do with the lawsuits she had read about just the day before, the lawsuits filed by restaurateurs in Texas, Pennsylvania and Tennessee, backed by conservative advocacy groups, alleging the RRF's priority period for restaurants owned by veterans, women, and socially and economically disadvantaged minorities to be unconstitutional. Federal judges in Texas and Tennessee filed injunctions to halt the SBA's distribution of funds to priority applicants like Meyer. Because the SBA could not pause their distribution process to work out a resolution to the court-induced mandate, the only option was for the SBA to promise to pay rescinded approvals, “once it completes processing all previously filed non-priority applications, and only then if the RRF is not first exhausted,” according to the New York Times.

Thousands of restaurant owners across the country found themselves in a situation similar to Meyer’s, promised money that now seems unlikely to arrive. Meyer had planned to use her RRF funds to cover essential operating costs. “The grant was going to go towards payroll and rent, since I can't ever cut down on those things any other way,” said Meyer. Having her overhead covered would have allowed her to redirect resources toward other business needs, like improvements to her storefront and updates to some product packaging to comply with new food safety laws. Since the packaging updates are non-negotiable, she’ll proceed with those; but having her grant rescinded means she’ll have to put updating her storefront on hold for now. “I'll have to just find the money somewhere and somehow,” she said.

Tara Gallina, co-owner of Vicia and Winslow’s Table, had a similar experience with the RRF. “I applied within the first two hours of the portal's opening,” said Gallina. “Then, probably two weeks went by, and they asked for clarification about the calculations, things like that.” After a few days exchanging emails with the SBA, she was told that she’d been approved for a grant for a specific amount. Several weeks have since passed, with her application seemingly now stuck in a pending status. As if drawing in a silver lining, she added, “They never have said that I won't be awarded the money, at least.”

Controversy surrounds the lawsuits that halted awards to priority applicants like Meyer and Gallina. All three of the white-owned restaurants that filed lawsuits: Antonio Vitolo, owner of Jake’s Bar and Grill in Harriman, Tenn., Eric Nyman of the Penn Hotel Sports & Raw Bar in Hershey, Pa. and Janice and Jason Smith of the Lost Cajun in Keller, Texas received awards shortly after filing the suits, while hundreds of thousands of applications were still pending. Blessed Cajuns LLC, the company who owns the Lost Cajun in Keller, Texas, filed for and was approved for PPP loans as a female-owned business before filing their lawsuit. America First Legal, the company that backed the plaintiffs in the Texas and Pennsylvania lawsuits; was recently founded by Stephen Miller and Mark Meadows; they are both former members of the Trump administration.

“I know that this wasn't what Congress intended, on either side of the aisle,” Gallina said. “The fact that he's still haunting this, that the Trump machine is still hurting us, is just ... I think if more people knew Stephen Miller was behind this, they would be pissed. I know I am.”

The consequences of rescinding promised money are clear. “People who received award notices had no reason to think that the money wouldn't come,” said Erika Polmar, executive director of the Independent Restaurants Coalition (IRC). “They got started with maintenance they needed to push forward with, they notified creditors that they'd soon be able to start paying back their debts, landlords were aware that restaurants were starting to get money, and people started to feel like they could really open things up and go for it again, and many of them did, exhausting what little they may have had left, only to have the rug pulled out from under them.”

“I think everyone would like the restaurant owners from those priority groups who were told they'd be receiving funding and have now had that money taken away to be made whole,” said Bonney. “Anything that would be done to help them would have to replace that money”

One solution to the problem would be to for Congress to substantially replenish the RRF; remarks by Senate majority leader Chuck Schumer, who has referred to the initial $28.6 billion as a “down payment,” would suggest that doing so has been part of Congress’ vision for the fund all along. The proposed $60 billion replenishment would be enough to cover the rescinded grants like Meyer’s as well as those like Gallina’s that seem stuck in permanent pending status the SBA’s now-closed application portal.

And the aid that's currently in limbo is more vital than people may believe, with rolling restaurant closures still a thing of the present. Quincy Street Bistro closed at the end of June, citing uncertainty about the Restaurant Revitalization Fund in a Facebook post. Similarly, The Posse on Broadway Lounge closed indefinitely on June 15. “Everything may appear to be going well, but it's really not, and it seems like there are going to be a lot more closures,” owner Tiffany Tabron-Jones said.

“I was already planning to reopen in late April when I heard about the fund," Tabron-Jones continued. "I was closed at the time but building momentum to reopen.” The reopen turned out to be unsustainable, and her grant application is still pending. “At this point, if I don't end up getting any help, I may not be able to open again.”

IRC executive director Erika Polmar explained that, despite some appearances, restaurants are still operating in a challenging environment. “Restaurants are opening with immense debt, if you've been to the grocery store you know food prices are way up, cost of operating is going through the roof ... And, while the vaccines have been great, diner confidence still isn't high. Mask mandates are back in St. Louis – every time the guidelines change, public confidence changes.” Polmar said.

Tabron-Jones is pinning her hopes for reopening on Congress replenishing the RRF. She runs a Facebook group for people to organize around the goal of building momentum for refunding, helping people effectively inform their representatives of the seriousness of the situation. “There's an opportunity for people to help, and if [the RRF] gets replenishment, then I really think it could be okay.”

The replenishment bill was referred to committees in both the House and Senate in mid-June and is currently gathering co-sponsors. At the time of publication, the only St. Louis area cosponsors are Rep. Emanuel Cleaver (D-MO) and Rep. Mike Bost (R-IL) of Illinois Congressional District 12.

“I'm born and raised in St. Louis,” Tabron-Jones said. “I love this city, and I've loved serving people in it; it really felt great to be connected to the city like that, and people really appreciate what restaurants do.”