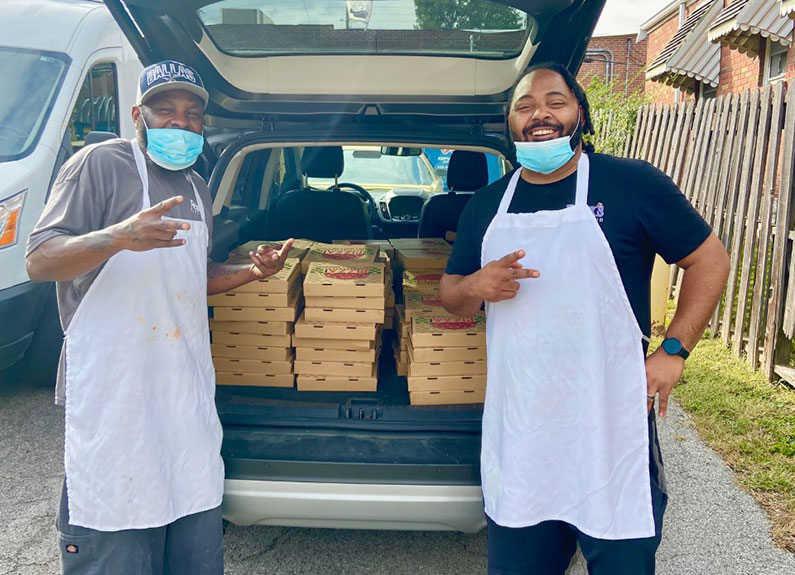 St. Louis restaurants donate nutritious meals to unhoused people and others in need

St. Louis is full of restaurants that have amazing food, but many are filled with amazing people too. Just ask Darryl Vennard. He’s been in the wine and sake business for over 30 years and has developed lots of relationships with restaurateurs in that time, but about a year ago put those relationships to use when he started working with Tent Mission STL, which partners with local restaurants to donate meals to people in St. Louis who are without housing every Wednesday and Sunday.

Tent Mission STL is a grassroots organization that helps people in need find food, shelter, clothes, vaccines, tents and more. Vennard got involved after donating and thought it would be more beneficial to partner with the organization directly. “I thought I had a skill set that could help them,” he said. One year later, they've donated over 6,000 meals on Wednesdays, and almost as many on Sundays. “It’s been a crazy success,” said Vennard, with dozens of local restaurants stepping up to donate fresh and nutritious meals, and even some independent people have paid for food on certain weeks. They focus on meals that have protein and vegetables, something that unhoused people don’t usually have access to, though desserts are often part of the lineup too.

The organization donates to some South City apartment buildings, where people sometimes experience food shortage, as well as to unhoused people in Carondelet Park. “We know them all; they’re human beings. They’re actually very interesting people and they just need help,” said Vennard. A little over 100 meals are served each night.

Local St. Louis restaurants have really stepped up throughout the process. “They had their worst year and they are still making food for other people,” Vennard said. “It’s really quite remarkable.”

Some highlights include fried rice from Mai Lee, curry tacos from Taco Buddha, double slices of salami pizza from Felix’s Pizza and sandwiches from Pastaria. And the kindness doesn’t go unnoticed, “When I pick up from Olio, the staff carries everything out to the car and asks questions about our work,” he said. Sasha’s Wine Bar is even doing a winter clothing drive and those who donate receive 10% off their bill during the month of December. “I’m humbled by how generous and kind everyone is. Salt + Smoke is a great example – they made these amazing meals three times,” Vennard said, adding he recently had an chance encounter with Salt + Smoke owner Tom Schmidt, who signed up to provide meals on a day for which Vennard was struggling to find donations.

“These are local, independent restaurants who have been faced with the worst years in their histories and they all stepped up for their local community – people who will probably never eat in their restaurants,” Vennard said. “Chick-fil-a didn’t return my call. I tried to get some coffee from Starbucks; no one called me back.”

There are no plans of stopping anytime soon. Tent Mission STL already has 10 restaurants lined up for 2022. “Until people stop living in the streets and the parks, we are going to continue,” he said. “I’ll probably do this the rest of my life.”

Volunteers do all the work, and the organization is always looking for people to help. People can donate money via Paypal or Venmo, and those with winter clothing donations can have them picked up by volunteers. These restaurants are truly making a difference in people’s lives. Anyone wanting to get involved should reach out to Vennard directly at 314.503.0363.