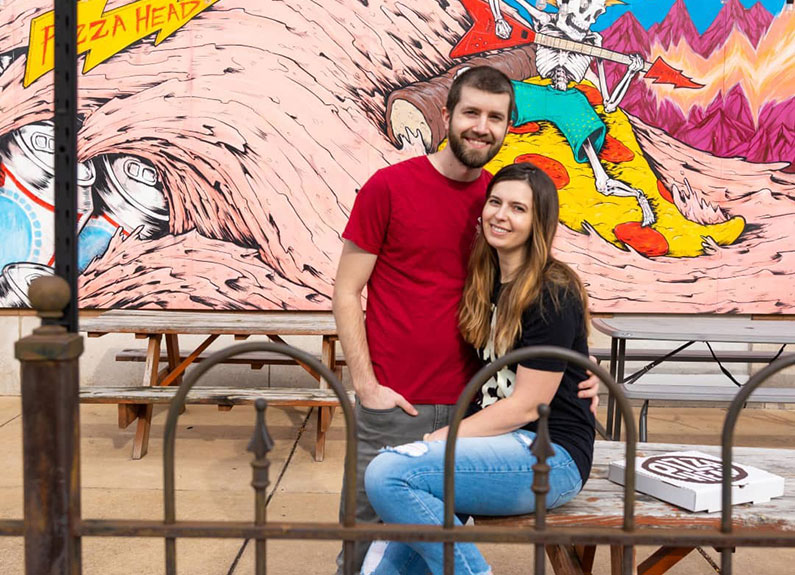 For the past four years, Pizza Head (3196 S. Grand Ave.) has served up New York-style ’za and classic punk music to hungry patrons, especially vegetarians and vegans. Recently, owner Scott Sandler (who had previously owned and sold Pizzeoli) decided to get out of the game, and sold the restaurant to two new owners, married couple Dylan Dodson and Sam Driemeier. But fans of the popular pizza joint shouldn’t fret, as the new management promises more of the same beloved pies and vibes.

“The gist of it is that Dylan reached out to me and was very interested in buying the place, and I wasn’t planning on selling it,” Sandler explained. “I was kind of tired of the business and it wasn’t that much fun anymore with not having indoor dining. It had turned into something else, and I wasn’t sure I had the energy to reignite it to what it was supposed to be. So I let the process run its course.”

For Dodson and Driemeier, owning Pizza Head is the natural conclusion of a years-long love of both the brand and of pizza in general. “We’ve been vegetarians for a few years and have been big fans of Pizza Head for years,” Dodson explained. Dreimeier added: “When we moved into our house, that was the pizza we ate on the floor. We had it on the day after our wedding. It’s always been a fun hangout spot and cool place to go.”

Both of the new owners have worked in various restaurants in the past, though neither has worked in a pizzeria. “No pizza yet, but we’ve made a lot at home,” Dreimeier said. “We usually have to make a half-and-half, because I like things spicy, and Dylan’s more of a New York cheese kind of guy.”

Dodson and Dreimeier will look to expand the menu a bit; they’d like to add breadsticks, some new sauces and a salad. “I’ve been getting into baking a lot during the pandemic, so it would be great if I could nail down large-scale cookie recipes, or else partner with some local bakers,” Dreimeier said. She’d also eventually like to develop a breakfast pizza.

As for the ’za, the couple plans to keep it the same. “There are a few things we’re doing minor tweaks to, like the cashew cheese, to make it creamier,” Dodson said. “But it’s still New York-style, same dough, same cheese. It’s perfect as it is.” According to Dodson, Sandler’s expertise made the transition of power easy. “He gave us a lot of advice across the board. He’s a very smart guy, very knowledgeable about all things restaurant and pizza,” Dodson said.

The couple plans to reopen indoor dining in about a month; and light repainting and some new murals are on the docket. Otherwise, much about Pizza Head will be business as usual. Hours are slightly expanded – the restaurant is now open till 8 p.m. instead of 7:30 p.m. – and lunch will be part of the plan going forward. At the moment, Pizza Head is between liquor licenses, though customers can enjoy kombucha from Confluence Kombucha, non-alcoholic beers from Wellbeing Brewing Co. and some CBD beverages.