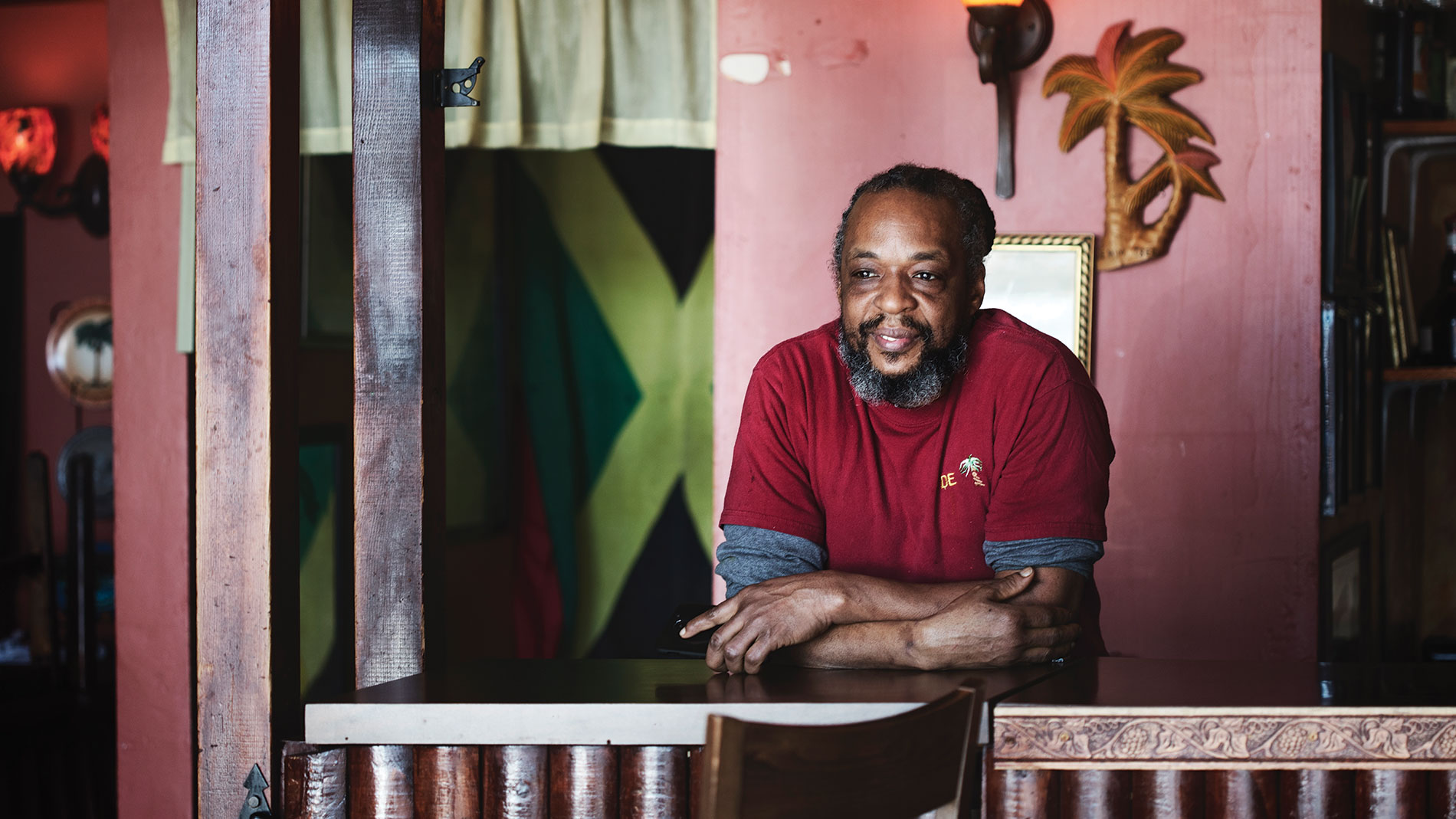 The first time I saw Easton Romer, in 2004, he was wearing a white chef coat, his braided hair neatly tucked under a knit cap, fervidly cooking away at a hot stove in a cramped kitchen. He had just opened De Palm Tree and I was reviewing the spunky little Jamaican restaurant for another publication. Now 53, Romer is still trim, his hair still braided, albeit flecked with bits of gray. Last month, De Palm Tree celebrated 18 years in the same location, amid other immigrant, family-run restaurants and small shops in the Jeffery Plaza strip mall just east of Interstate 170 on Olive Boulevard.

A lot has changed since then, especially in the last four years as small business owners and homeowners in the area have been bought out to make way for the massive retail and residential redevelopment now in progress. Remaining Jeffery Plaza business owners, including Romer, have until Feb. 18 to vacate (more on that later). But nothing has changed the appeal of Romer’s jerk chicken – not time, not a devastating pandemic, not the uncertainty of the restaurant’s next location.

De Palm Tree’s jerk chicken has always been a top seller, but somehow it’s become ever more popular during the pandemic. Romer explained this during a sit-down interview at the restaurant, amid tables and chairs stacked to the side as if portending the move to come. It’s not surprising the craving masses that once devoured mounds of the seasoned, smoky chicken elbow-to-elbow on vibrant Saturday nights, washing it down with bottles of Red Stripe, house-made rum punch or Jamaica’s grapefruit-flavored Ting soda, now drive from near and far to get their fix. If they are like me during a recent pickup trek, they turn up the reggae grooves as their car fills with the aroma of Romer’s freshly made jerk rub, pungent and citrusy, bursting with the discernible but not overpowering heat of chiles.

What else has been popular for take-out? “Wings!” Romer exclaimed. “Oh, my God, ever since the pandemic, it’s been wings, wings. And wings are more expensive than steak. … It don’t make no sense.” Unlike some other restaurants, Romer hasn’t cut his menu despite the rising cost of ingredients like chicken wings and, most dramatically, oxtail. Even when his wholesale price doubled, increasing his customer’s cost, demand didn’t flag. “When I opened, I had a hard time having people eat oxtail. Now, people order two orders: one for today, one for tomorrow,” he said.

I had only one oxtail stew for this review, but I understand the desire for more because two days later I had to stop myself from ordering another. Romer transforms sections of seasoned cow tailbone through a long braise until the meat is tender, the marrow delectably gelatinous and the onions, butter beans, scotch bonnet peppers and warm spices all meld into a soul-satisfying comfort dish that encourages much bone gnawing.

But Jamaica’s national dish isn’t jerk chicken or oxtail stew: It’s ackee and salt fish. The yellow flesh from the ripened pods of the ackee tree is an acquired taste for many American palates. I found the mild lemony flavor of the chopped ackee mixed with the contrasting texture and bold flavor of the salted cod as interesting and enjoyable as the first time I ate it all those years ago.

When the pandemic began, Romer closed for about two weeks before starting curbside service, then adding inside pickup as things began looking up. Despite the lack of in-house dining, people are still patronizing De Palm Tree. “They still love the food,” he said. He wasn’t exaggerating: While waiting for several to-go meals at different times for this review, there was a steady stream of customers, and the phone never stopped ringing.

The same pandemic-related problems every other restaurant faces – increased costs, staffing, changing health protocols – are compounded by the pressure Romer has to find a new location, however, and the clock is ticking ever louder. “It’s kind of stressing,” he said. Romer explained that he’s been looking all over for a new spot, including Overland, St. John and Olivette. “My customers are on me – ‘We need you,’ they say.” It seems the area also needed him. “When I came to the neighborhood, it was doing OK, but De Palm Tree brought in people,” he said. But leaving is hard. “When you work on something for so many years and you finally see the light at the end of the tunnel and then realize you have to start over, it’s sad,” Romer said. “It’ll be difficult to start over, but we’ll bounce back. The ball still has air in it.”

After surviving 18 years in the same location with a loyal clientele and now facing new challenges, it’s the cooking that motivates Romer more than anything else. “I love cooking,” he said. “I have a passion for it. I really like putting my food on a plate, though, not a box, because the artwork is satisfying.” On a warm afternoon a few months back, Romer set up a table outside for a group that really wanted to eat at the restaurant. “I got to do my plates, and it felt so good.”