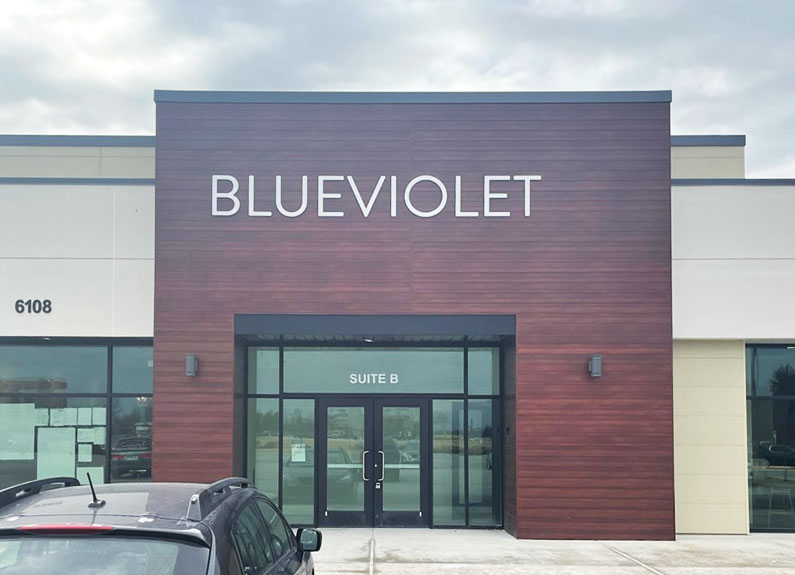 Blue Violet, a Michael Del Pietro restaurant, will open in Edwardsville this spring

Although a brunch concept was initially in the works, the restaurant has shifted gears and will focus on lunch and dinner, with chef Jordan Knight, of Clayton’s Il Palato, another Del Pietro restaurant, conceptualizing menu items. They won’t identify with a singular influence in the kitchen, instead drawing from the Midwest, down South, Latin America and Asia for a robust, Americana flavor experience; however, specific menu items have not yet been determined.

Blue Violet also marks an opportunity for French and Del Pietro to adopt somewhat new aesthetics. It will have a similar feel to Il Palato, but less formal. The interior will feature white marble, including a Carrera marble bar, brushed gold light fixtures reminiscent of the 1950s, and an overall “bright and fresh” aura, with minimalist furniture design.

The 3,000-square-foot space will seat between 70 and 100 patrons for table and small-plate bar service. French expects to work closely with a handful of Edwardsville wine purveyors to build an expansive selection, in addition to offering classic cocktails, although those details are still in flux. Outdoor dining is also a future prospect, but “that’s far down the line,” French said.

“This is a unique restaurant for Michael and I,” he said. With Sugo’s Spaghetteria as an Edwardsville community mainstay, the pair looks to highlight their colleagues while providing a culinary experience that diverges from their Italian home base.

Along with Knight helming the kitchen, Micah Hopkin, who has been running Sugo’s in Edwardsville for nine years, and Pat Baltes, who has worked in some capacity in all of the group’s restaurants, will step into leadership roles as partners at Blue Violet. For a restaurant to succeed, “the synergy amongst the owners and the staff has to be there,” French said. “We’ve been able to operate [multiple] restaurants at a time because we do give our staff and the partners some autonomy.” He is adamant about letting Baltes, Knight and Hopkin shine, with Hopkin bringing intimate knowledge of the Edwardsville community to the team.

“The landscape is arguably different on a weekly basis,” French said of the Edwardsville area. “We want to be a part of that.”