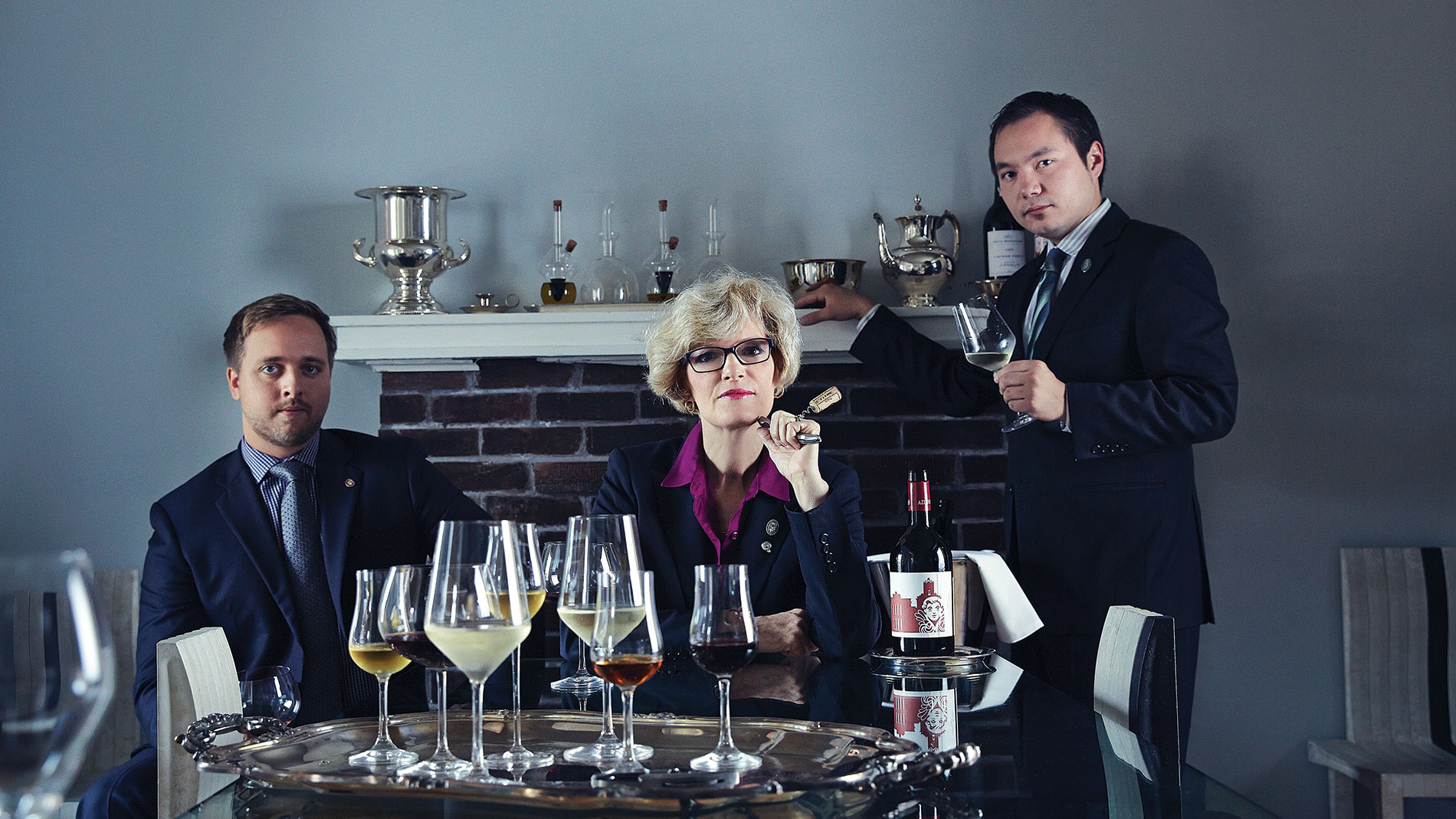 You’re the beverage director at a new Italian bistro. The owner of the restaurant has come in to speak with you about wine pairings for an upcoming five-course tasting menu, but she only has 12 minutes to spare. She informs you that the menu will cost $150 a head for food and $75 for wine. She hands you the menu, which you’ve never seen before. You hastily flip it over, only to find that it’s in Italian. She tells you each wine must complement the region from which each dish’s ingredients hail. The wines must follow the standard 200-percent price markup and you must stay on budget so the restaurant doesn’t actually lose money on the dinner. But before you begin, she also wants you to smell three different glasses of wine, all of which come from the same grape.

Then, a salvo of questions: What is the grape? Where does each wine come from? Who is the winemaker? What is the vintage? How much would each wine cost on your wine list? But back to that tasting menu. Do you have your suggestions ready? What’s taking you so long? But I hate that suggestion. Do you think I’m a peasant? You know what, just in case I change my mind, I want five alternatives, this time domestics. I also have six spirits for you to identify. Take a whiff from each.

Tense after just reading this? Now imagine this scenario is part of a real-life exam for which you have been studying for almost a year. Or as Andrey Ivanov, wine director at Elaia, Olio, United Provisions and soon-to-open Old Standard described, “Imagine taking a date to a high school dance, but you’ve never been to a high school dance. You’re so nervous to dance with the date. That’s the anxiety you have during this test.” He laughed. “That, or bungee jumping.”

This sweat-inducing 12-minute scenario is one of three Ivanov experienced while taking the service portion of the master sommelier exam administered by The Court of Master Sommeliers, the most ridiculously challenging test you’ve never heard of. “If you realize you’re just waiting tables, you’re great,” said Ivanov. But, he elaborated, if you let the test get to you – if you remember the 30-plus hours a week you’ve been studying while maintaining a full-time job and the years you’ve devoted toward The Court’s examination process – “You become that kid, seeing your date dancing with everyone else. You become that kid standing with your back against the wall, hyperventilating into a bag.”

Holding Court
In the world of wine, the most prestigious sommelier diploma comes from the uber-exclusive Court of Master Sommeliers. Within The Court there are four levels of certification: introductory, certified, advanced and master. With a pass rate hovering around 5 percent, only 219 people worldwide have passed the master exam since the test’s inception in 1969. In 2014, only 5 out of 140 passed. Statistically, it’s easier to pass both the CPA and California Bar exams, be admitted to Harvard or play professional baseball than become a master sommelier.

But don’t tell that to St. Louis’ wine community.

Currently in the Gateway City, four people are studying for their master certification. Ivanov is one, along with Patricia Wamhoff, beverage director at the restaurants at The Cheshire; Stephen Gitto, liquor manager at the Schnucks location on Clayton Road in Ladue; and James Hallett, cellar selections manager for Major Brands. Without a master sommelier living in town and only a handful in the Midwest (with Doug Frost in Kansas City being the biggest name; “He’s our Yoda,” said Ivanov of Frost), you would think the race to become St. Louis’ first master somm would resemble some ruthless, Cold War-like competition. Instead, what I found more resembled Mister Rogers’Neighborhood (if all the puppets drank wine).

Rather than use cutthroat tactics to prepare for the next master exam in February 2015, the four have created a study group, because, as Gitto said, “You cannot do this alone.”

Wait a minute, you might say. Does that mean we’re all “studying” when we drink wine with our friends on a Saturday night? Not exactly. From memorizing Bordeaux winemakers to drawing maps of the regions of South Africa, this study group is intense. “We’re kind of masochistic nerds in that way,” said Ivanov.

In addition to the service portion of the master exam, there is a theory component and a blind tasting. Gitto talked me through a tasting, and when he was done, I felt like I was surely in the presence of Sherlock Holmes. In 25 minutes, using the powers of deductive reasoning, test-takers must try six wines and be able to not only identify the grape varietal, provenance, appellation and vintage, but also explain why they smell and taste the way they do. “Say you smell ginger, but why?” Gitto asked. “Ginger can be associated with botrytis, a fungus which concentrates sugar. That fungus is responsible for some of the most famous sweet wines in the world.” For Gitto, who also holds a master’s degree in chemistry, studying has always been a part of life, but he was quick to point out that plenty of people choose not to go through The Court’s certification process, and they still know what they’re doing. “It doesn’t mean that they’re not very much part of the forefront of wine in St. Louis. You don’t have to take a test to be good at what you do,” he said.

Paying it back(ward?)
Although there are just four “masochistic nerds” currently studying for the master exam, there is a whole fleet of local beverage professionals helping each other out as they study for certifications, competitions and simply for the pursuit of knowledge. “You can find some sort of tasting group any night of the week,” said Brandon Kerne, certified sommelier and wine director at Bar Italia. “If I wanted to tonight, I could find someone who would want to run through the Grand Crus of Burgundy.”

For instance, in late January of this year, a server from Cielo at the Four Seasons named Patrick Olds walked into 33 Wine Bar and mentioned he was taking the Court’s certified exam in two weeks. A stranger announcing to a bar his plan to take a test sounds like the perfect way to be ignored, but instead the opposite occurred. For the next two weeks, Kerne, who at the time was 33’s wine director, kept the bar open late so Olds could come in for after-hours study sessions. Ivanov and Matt Dulle, certified sommelier and beverage director at the St. Louis Club, joined in, too. “It was like a NASCAR pit stop,” Kerne said.

“Andrey did the same thing for me as we did for Patrick,” Kerne explained, recalling when he took his certified exam last year. “It’s a lot of paying it forward. Paying it backward? Whatever that phrase is.”

“I didn’t deserve it,” Olds recounted. “Andrey, during the busy time at Olio, brought me in the back room, went over theory, tasting. They were all so good to me.”

Olds passed his certified exam and now continues to look for ways to help the wine community. “Whenever I get something new and cool (at Cielo), I want to call Brandon and give it to him. That’s the way we are working.”

“It’s not all about the examination,” Kerne said, reiterating that professionals don’t need The Court’s blessing to prove they’re knowledgeable. “But once you get someone certified, they’re in the groove. They’ve chosen wine as a profession. And with more professionals, there is more diversity on the shelves.”

Wamhoff, whom Ivanov and Kerne consider the godmother of the St. Louis sommelier scene, agreed. “If you went into a restaurant in the mid-’90s, you were handed a wine list that had been printed up by a major distributor because the restaurant didn’t know anything about wines,” she said, adding that most restaurants around town had the exact same wine list. In fact, when Wamhoff moved here in 1993, she recalls being one of only two certified sommeliers in the entire city. “Since there was a lack of knowledge all around the industry, the importers were reluctant to send any of the great stuff here.” Now, she sees St. Louisans who are not only more knowledgeable about wine, they’re hungry for it. “There has definitely been a progression in the last 20 years. If you walk into Schnucks and Dierbergs, you can get really great wine now. That wasn’t possible five, 10 years ago. It’s a trickle-down effect.”

“Whether I think the pinot noir I’ve chosen is better than the other guy’s doesn’t matter,” Kerne said. “It’s the passion. The more we can connect the consumer to the wine they’re drinking, the better we will be as a wine city.”

In the St. Louis wine scene, it looks like a rising tide does indeed lift all boats, as the adage goes. But there must be some sort of competitive edge.

“It’s certainly competitive,” Dulle said. “It’s (as) competitive as anything I’ve ever seen, but out of personal respect.”

“Anyone who says they don’t want to be a master sommelier because there’s so few in the world is flat-out lying,” said Ivanov. “But when you have a group of people pushing you, making sure you’re getting better, it’s so much more rewarding. Good things happen, not just to you but for everyone.”

If I could have any wine in the world right now:

1990 Pol Roger Cuvée Sir Winston Churchill “One of the wines I popped open when I passed my advanced exam.” – Stephen Gitto

1780s Madeira “It went across the ocean and back a few times. One of the greatest beverages on the planet. There’s Madeira out there for sale that dates all the way back to 1715.” – Andrey Ivanov

1945 Domaine de la Romanée-Conti Romanée-Conti “One of the most famous vineyards in the world from one of the best vintages ever. It is also part of history, as this is the year marking the end of World War II. To enjoy a bottle of one of the finest wines ever made and reflect upon history at the same time would be one of those amazing moments in life.” – James Hallett

The wine I love drinking any old Tuesday:

2012 Argyle Pinot Noir “Soft, feminine and a cabinet full of baking spices. Delicious by itself or paired with fish, stewed meats or pasta. Elegance in a glass.” – James Hallett