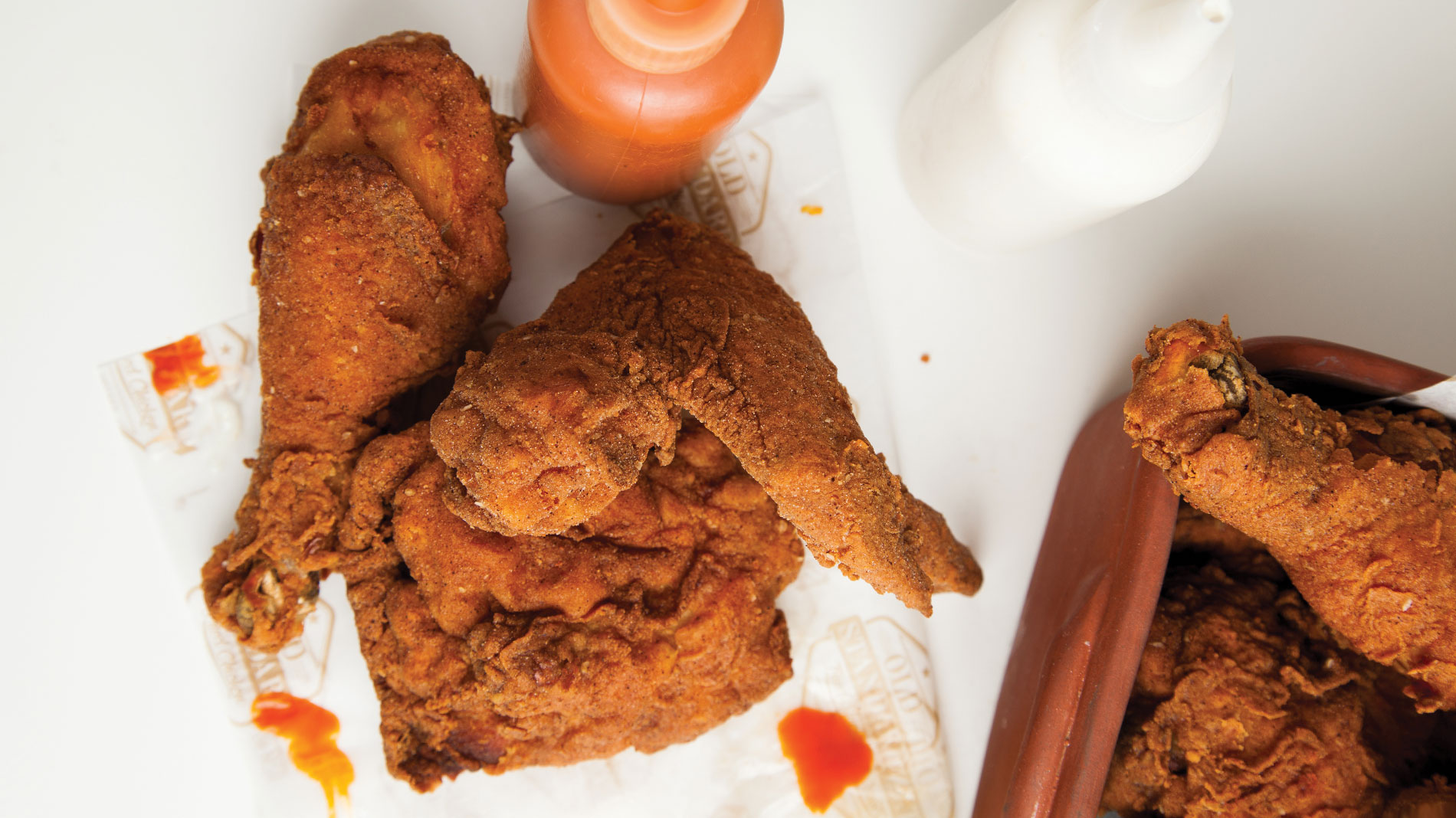 Fried chicken is America’s great equalizer, food for plebes and 1-percenters alike. But can you put the staple of American gastronomic lore on too high a pedestal? Can the stuff of Sunday suppers, diners and church picnics be revered to the point of fetishism? After all, it’s uncomplicated; anybody can make it with nothing more than a bird, flour, salt, pepper and hot oil. I have no great insight as to why we’re seeing so much of it lately, but when national big-wig chefs like Thomas Keller and David Chang put fried chicken on their menus, something’s up.

With Old Standard, Poremba has confidently swaggered into a subculture that elicits as many polarized opinions, secret recipes and endless riffs as barbecue. It’s probably why his research tour took him to more than 500 eateries around the country.

Some will cotton to Old Standard’s decor. With its bare, ornamental two-by-four rafters, plywood-topped tables and benches, whiskey barrel bar tables and fake shutters, Old Standard was made to look like either an unfinished barn or no-frills roadside chicken shack. But there was something off-putting about this countrified simulacrum; it’s not as if real chicken shacks try to be chicken shacks.

But then there’s the chicken. While I admit a bias for skillet-fried, I have only two criteria for the dish: quality bird and good seasoning. Old Standard scores on both.

So much is made of the wholesome, humanely raised, drug- and hormone-free chicken from Indiana that the menu description, when I read it, almost sounded like the episode of Portlandia where a couple asks the waitress if the chicken they’re ordering had a good life.

Undoubtedly, this is excellent chicken, and excellently made: brined, dredged in seasoned flour and left to dry before it is dunked in buttermilk, dredged again and fried under pressure (“broasted”) in grapeseed and canola oil, a process yielding remarkably juicy meat and grease-free skin. The double dredge wraps the big, meaty pieces like a thick, copper-colored winter coat, one that doesn’t slip off when bitten into. Those used to a light, crispy coating will exercise their jaws; there is a lot of crunch to this chicken, the kind that holds up when eating it cold the next day. The seasoning was pronounced with salt, pepper, garlic powder and smoked paprika. On the side came the house hot sauce and, as if in homage to Poremba’s Mediterranean heritage, a cup of honeyed yogurt dip with lemon zest.

When Old Standard first opened, many groused about the prices for its whole, half, two-piece and a la carte servings. Admittedly, they were high enough to make going out for something as basic as fried chicken a special occasion, the opposite of the “chicken shack” vibe the restaurant tries to portray. Since my visits, prices have been lowered by $2 to $4 and the accompanying sides (“trimmings”) increased by one.

Many names of the trimmings are takeoffs on the recipe titles in Ernest Matthew Mickler’s seminal Southern cookbook, White Trash Cooking. To attach their names to altered recipes seems disrespectful. Still, close attention is paid to their execution. Oleta Brown’s Smothered Greens tasted of the sweet, funky potlikker left over from boiling them and had the right amount of vinegary tang. The mashed potatoes were smooth and fluffy and served with creamy fried chicken gravy that seemed more of a béchamel sauce – and was much less savory than expected.

Even before your chicken arrives, you would be remiss to ignore the selection of appetizers, called “snacks” on the menu. There are house-made fried horseradish pickles, some sweet, some sour, all delicious. Nobody’s Boiled Peanut Hummus made a fine starter for the table, getting the Southern treatment by substituting garbanzo beans with peanuts for a nuttier character, then punched up with smoked, pickled peppers. A basket of Mrs. Arnold’s Saturday Night Fried Shrimps came flattened and so crispy-light that they were gone in a single bite. Charlotte’s Mother’s Dressed Eggs, six gems of creamy-mustardy egg halves topped with thinly sliced pickled peppers and cornichons, then dotted with capers and chives, spiffed up the ordinary deviled egg. The seasonal salad – Brussels sprouts, grapefruit, crispy onions and green beans glistening from a toss in vinaigrette and served in a “bowl” of Romaine lettuce leaves – balanced the brightness of citrus with earthy flavor notes.

Order the bread board, but have it served with the chicken. Otherwise, you can’t resist eating your way through two styles of cornbread (dense, crusty “Real” and the cakier “Yankee”) and two types of biscuits (flaky and drop). An order comes with a choice of four flavored butters and jams. Our lemon-honey and molasses-pecan butters and strawberry jam selections were fine, but as one dining companion pointed out, plain salted butter would have been just as good.

There is bourbon galore behind the bar. Whiskey-based drinks are straightforward, avoiding the trendy trappings of overwrought cocktails. Beer is limited to cans of Busch, PBR, a few craft brews and a rotating Urban Chestnut draft handle. Best among the wines, categorized as red, light white, white, sparkling or pink sparkling, are the grüner veltliner, an Austrian white, and the French sparkler Saint-Hilaire. Both were tingly and acidic enough to make excellent accompaniments to fried food. In addition to bottled micro soft drinks like Ski and Bundaberg, Old Standard makes its own fizzy concoctions in flavors like elderflower, celery leaf and double cream soda.

Thematic flubs aside, Old Standard is a fine addition to Poremba’s growing stable of restaurants (Olio, Elaia, La Patisserie Choquette) and provides us with another version of classic American fare, seen through the eyes of one of its most ardent fans.