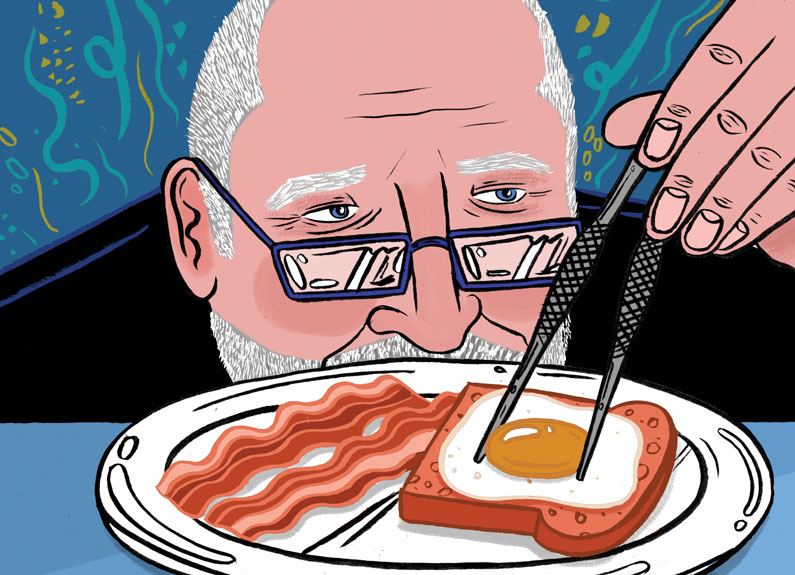 Chef Mike Randolph has opened a number of restaurants since working at Chicago’s now-shuttered Moto. Starting with The Good Pie in 2008, Randolph went on to open Half & Half, Little Country Gentleman, Medianoche, Randolfi’s and Público. As he gears up to open Half & Half’s second location in Webster Groves this summer, he told us about one meal he ate in 2001 when he was at a professional fork in the road and the late chef Michel Richard changed his life.

Citronelle, Washington, D.C. (2001)
“I was finishing school for political science and had just kind of realized I hadn’t done well enough to get the jobs I really wanted. I didn’t want to muddle around at the bottom of the industry, so I started thinking about culinary school. One night [my wife, my parents and I] went to Michel Richard’s Citronelle in D.C. It was in the Ritz-Carlton in Georgetown, and the restaurant had this beautiful glass-front kitchen. It was the first time I had seen four guys plating one plate of food. And I remember thinking, ‘Look how calm everything is.’ The kitchens I had worked in were like a mad rush, and here’s this place and nobody’s breaking a sweat.

“One of the things that really stuck out to me was that there was a sense of humor in the food. They had the toques, the pressed chef jackets, tweezers, all that … but at the same time they didn’t take themselves too seriously. I remember getting a plate that looked like a sunny side up egg with bacon and toast. I think the toast was marzipan, the bacon was something, the egg was set panna cotta for the whites and a mango for the middle. Now, that dish is the Food Network version of molecular gastronomy, like, ‘You can do this at home in six easy steps!’ But in 2001, it was eye-opening. Here you are at this French institution, and you expect this delicate little financier, and then here comes this cafeteria tray. There was the sense that Michel Richard was having fun with you at the end of your meal.

“This was before Moto and Alinea. Throughout the course of the night, I was just totally blown away that food could be something that I never knew about. It was perfectly seasoned small bites of food, tons of textures – that was Michel Richard’s big thing. Every dish had some crunchy element, some kind of creative textural contrast. It was absolutely my first exposure to any of that, and I think that’s what made me so interested in Moto. At this point in my life, [molecular gastronomy] is something I’ve grown out of – now I just want a perfectly cooked piece of meat with one sauce. But I felt like at that time it was cool to research and delve into what food could be – texturally and flavor-wise. I’ve had a lot of pretty transcendent meals, but that stands alone.”

Editors' Note: The print issue of this story incorrectly stated that the new Half & Half location would be in Kirkwood. This piece has been updated with the correct location.