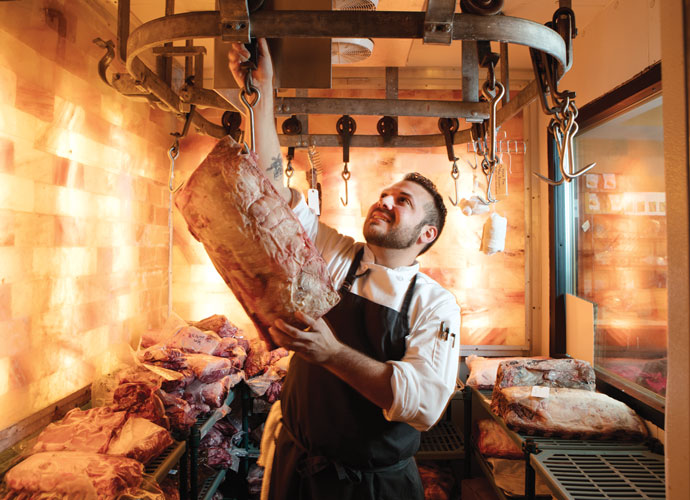 Head Butcher and Sous Chef at Truffles Butchery
Age: 27
Why Watch Him: He was a born butcher.

What do you do if your kid tells you he likes cutting raw meat? Hide the knives? If you’re Eric Tirone’s family, you start buying whole chickens. Tirone’s older brother, Chris Tirone (a member of the Ones to Watch Class of 2011), convinced their parents to let them practice breaking down the animals. “My dad said it was a little creepy hearing a little kid say he liked cutting raw meat,” Eric said. “But it’s all I’ve ever wanted to do.”

At 17, he was helping his big brother butcher whole lambs and fish at An American Place. “Eric shared the same interests I had: sports, cooking, hunting, fishing,” Chris explained. “When I got into cooking, he enjoyed it as well and continued to mess around in the kitchen. Even at home I wouldn’t let him skate by.”

To understand Eric Tirone, all you have to do is watch him break down a massive hog with the skill of a surgeon and finesse of a ninja. It’s that virtuosity that got him promoted to head butcher at New Orleans’ famous, swine-centric Cochon Restaurant in just one year. There, he was butchering at least four pigs a week. Now, at Truffles Butchery, he butchers about one a week and teaches classes.

Does Eric Tirone want his own place? “Oh my God, absolutely! It’s been my end goal my entire life,” he exclaimed. “I haven’t been doing all this for shits and giggles. I can’t see myself doing anything else!” And when that time comes, after “knocking out a few big-boy things” like his wedding next year, you can bet the Tirone brothers will be back, standing side-by-side in the kitchen.