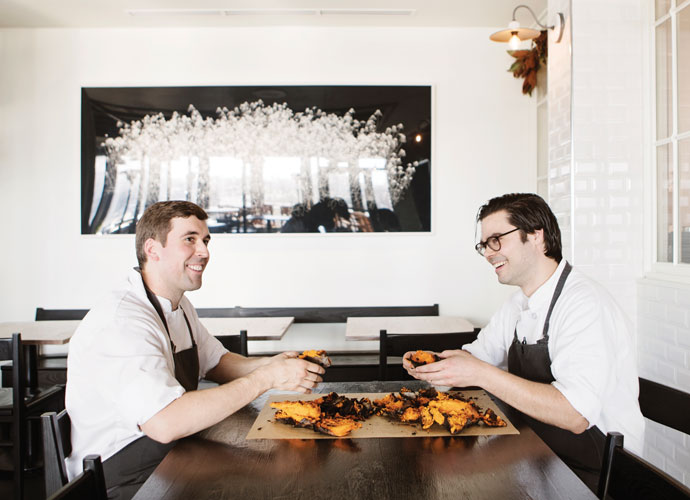 Ones to Watch 2018: Patrick Seibold and Alec Schingel

Sous Chefs, Vicia
Ages: 33
Why Watch Them: The best new restaurant in St. Louis couldn't run without them.

To be the best, you’ve got to have direction. Aside from growing up in Illinois and working as Vicia sous chefs, that’s perhaps the biggest thing Patrick Seibold and Alec Schingel have in common: a lodestar commitment to improving agriculture through their work with farmers as chefs. It’s why they’re both at Vicia now. “But also,” Schingel added and Seibold would agree, “I don’t like the idea of working at the second-best restaurant in St. Louis. I just don’t. I want to work at the best.”

The two have been chasing better food sourcing through some of the best restaurants in the country for most their careers. Seibold went from Thomas Keller’s Bouchon Bistro straight out of culinary school to Danny Meyer and Michael Anthony’s Gramercy Tavern to Alice Waters’ Chez Panisse. Asked about this laundry list of America’s culinary elite, the clean-cut chef matter-of-factly explained he thought Keller’s focus on technique would be a good introduction to fine dining, he was attracted to Anthony’s vegetable-centric philosophy, and he wanted to experience Chez Panisse’s relationships with farmers. Wouldn’t we all, though?

If it sounds like Seibold had to have plotted that precise course his entire life, that’s probably because he grew up in a restaurant family and always knew he wanted to be a chef. Schingel, equally intentional though perhaps less methodical, got into cooking because he was sick of eating Hot Pockets every day in college. Then he became obsessed.

After a sudden swerve into culinary school, he worked his way up the St. Louis food ladder to sous chef at Gerard Craft’s now-closed Niche. When Schingel later landed a stage position at In de Wulf in Belgium, his experience with farmers and foraging at the remote Michelin-starred restaurant sparked an increased interest in sourcing. That made his next gig at Dan Barber’s Blue Hill at Stone Barns a dream job.

“It was the opportunity to take a graduate school mentality,” Schingel said. “[It was a place to] learn how sourcing products works, how to talk about farming practices and intelligent methods.”

To succeed at a high-concept place like Vicia, you need to be what Gallina called an intelligent chef – not a “head-down cook” who just gets the work done, goes home and doesn’t think about it. “This isn’t a 9-to-5 job for Patrick and Alec. They take it home with them. They research. They read books. They’re constantly diving into what’s going to be next, trying to be ahead of the ballgame.”

Schingel is the first person in the kitchen each day; as daytime sous, he runs the lunch service and Vicia’s whole bread program. Seibold helps Gallina run dinner and handles most of the restaurant’s butchery. “He’s taking on a lot of ownership with the nighttime cooks,” Gallina said. “He’s also a very intelligent person. He’s got a lot of incredible ideas.”

Gallina also rhapsodized on both the sous chefs’ teaching abilities. But, most important to Schingel and Seibold, Gallina wants them to take more ownership of the menu and to be more involved in working with producers.

“I definitely couldn’t do it without them,” Gallina said. “This restaurant wouldn’t be half of what it is without the help of those two.”

After navigating a major restaurant opening (both came on months before Vicia’s first service), Schingel and Seibold leave us with only two questions about their next steps: when and where?